The Book of the Howlat

I’m not much of a bird person, but The Book of the Howlat is gorgeously birdie. Illustrated by Kate Leiper, you could simply sit and marvel at the pictures of the many birds. 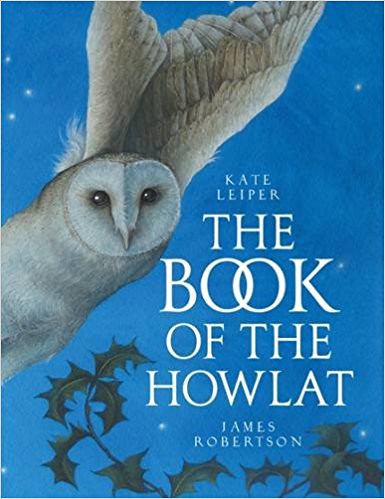 James Robertson is responsible for this re-telling of ‘one of Scotland’s oldest poetic gems’ and I must admit I’d never heard of it. The story is about an owl who thinks he’s dreadfully ugly and who wishes to look like the peacock. As sometimes happens in fiction, his wish comes true, but after this he’s not only peacock-like but quite unbearable.

Something has to be done.

It’s really that old tale about how you should learn to appreciate what you have, or in this case, what you are.

Hopefully the moral will go down well with young readers. And then there are all those beautiful bird illustrations!

The best kind, perhaps. I’ve had Crimespotting, an Edinburgh Crime Collection introduced by Irvine Welsh, on the TBR pile for a year now. Donna Moore was singing its praises on her blog and I hastened to buy it. Yes, buy it. Actually. Felt that since it’s in aid of charity (the OneCity Trust) that I should pay. I hope there is a slight logic in this.

Ten well known crime writers have each written one short story featuring a crime that has some connection with Edinburgh. Some I liked a lot, others less. There was one I didn’t quite get, and one where there was an uncalled for attack on homeopathy.

Ian Rankin’s one was clever and scary, although I did wonder about one fact which jumped out at me. Margaret Atwood has written a nice historical/modern tale featuring Elizabeth I among others.

James Robertson’s 19th century story made me think of Sherlock Holmes with a conscience. Denise Mina’s contribution is very short, which just goes to show how brief you can be and still have an impact.

And then there’s Duncan’s mother, aka Lin Anderson. Duncan is a Philip Pullman fan, which is how I’ve heard of him and his mum. And now I’ve sampled Lin’s style, I know I’d like to read more. Her Dead Close is a mix of forensics and ghosts.

Before I’d even read this collection, Donna blogged about another one. I somehow suspect I’ll never quite catch up.