The Track of the Wind

The tone in Jamila Gavin’s The Track of the Wind, the final book in her Surya trilogy, is a lot darker, and a bit more hopeless. You’d think that moving closer to a conclusion, things would be allowed to look up a little. On the other hand, real life doesn’t work like that, so why should a realistically intended novel set in India and London in the 1940s, and now into 1951 be all roses and happiness? 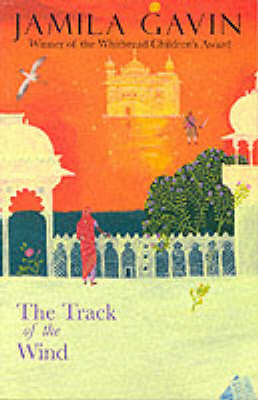 Marvinder and her younger brother Jaspal have returned home to India with their father Govind, and as by a miracle, their mother Jhoti isn’t dead, and they are together again. But because Marvinder has been abroad, she is seen as less pure than a girl ought to be, and there are no offers of marriage. Just as well, when her heart is still in London. And then someone does want to marry her and she can’t go against her father’s wishes.

Jaspal goes the way of many angry young Sikhs, and learns to fight for his own country. Relations with his one surviving childhood Muslim best friend are not good. And then Marvinder’s love Patrick turns up from London…

There is yet again a mystical element to what happens. There is a ‘Watcher’ who watches, and acts, hidden from the world. But what does he really want?

Because Jamila does not make this end – completely – happily in the expected western way, the story feels much more real. You can sense the despair of young women in forced marriages – like Jhoti – and the feeling of anger against the British. There is so much beauty, but also cruelty, and rules which must be obeyed.

Jamila counters this very Indian setting with letters from friends and family in Britain and America, which shows that they are light-years apart. But also that there are surprising similarities.

This has been a very enjoyable and educational trilogy. And I’m western enough that I’m really grateful for that epilogue.

This is a beautiful collection of short stories featuring WWI. Edited by Tony Bradman, some of our bestest children’s authors have come up with their own interpretation of the war. It’s interesting how writers can find such diverse starting points for a story on one and the same topic. Many of them have based their story on memories of grandparents or other relatives who fought in the war, or who were among those left behind, or who had to live with the fall-out of what happened to family members.

I can’t pick a favourite. They are all special in one way or another.

As I always say about anthologies; they are the perfect way of enjoying many writers in small doses, and this collection proves again that the short story is a wonderful, handy size of fiction.

Some of the contributors have written stories about soldiers from other countries, thus highlighting the world aspect of the war. Germans are/were human beings like all the rest. They didn’t eat babies. Young men from Australia and New Zealand came to Europe to fight. And so did Indians who sometimes had no idea of what was going on, and the Irish who had issues at home, while fighting for a country that was also the enemy.

If you like war stories, this is for you.

This is a fun crime novel for young readers, especially if you are a little bit of an outsider like Darkus, and would like to be cleverer than everyone else. It’s very satisfying being really good at detecting.

It’s a family thing, this. Darkus has a detective father (never mind that Alan Knightley has been in a coma for four years) and takes after his dad, sharing his passion for odd cases. Rohan Gavin who wrote Knightley & Son, takes after his mother Jamila, who is pretty good at writing for children. This is his first book, and it is Darkus’s first real case.

People are behaving strangely in bookshops. They are buying the new must-have self-help book The Code, and afterwards surprisingly many of them commit a crime of some kind. Knightley Sr wakes up from his coma and jumps straight into this mystery, and because Darkus has spent the last few years reading up on his dad’s old cases, he’s the perfect assistant.

The plot is about as believeable as the other Sherlocks’ and as fun. Particularly for young readers who might not be so familiar with the Conan Doyle version as they are with Benedict Cumberbatch’s on television. In turn hilarious and a bit scary, it’s a good adventure.

Along with the detective duo you get a slightly crazy Scottish policeman, a Polish housekeeper (very handy at all sorts of things), a clever stepsister and a raving loony stepfather. There are cars. Tube trains.

Something tells me the tweed-clad Knightleys will be back.

The Eye of the Horse

The recent trip to India, including to the non-touristy city of Chandigarh, by Sherry Ashworth and Iris Feindt on behalf of MMU, spurred me to continue reading Jamila Gavin’s Surya trilogy after far too long a gap.

We left Marvinder and Jaspal in postwar London at the end of book one. The Eye of the Horse carries on with not much of a break in time. Their father is still in jail, and they live with his new, Irish family in Clapham. On the surface both children have adapted well, but deep down they want to go home.

At the same time we see what’s happening in their home village in India, where Jaspal’s best friend is sleeping rough, and a white horse appears and starts people talking. Is it an omen? Gandhi has just died, and his ideas of people living in peace with each other look like they will amount to very little.

Jamila weaves what goes on in both countries into one story, and Marvinder feels as if she is talking to her mother in her head. She and Jaspal meet up with Edith Chadwick again, which turns into an unsettling experience for all.

Marvi plays the violin, and she falls in love. Jaspal fights. Prejudice is rife.

This is another beautiful tale of displaced individuals and their struggle for a better life. Postwar London is always interesting, but what makes the book what it is comes from the Punjab, and post-partition life there.

Jamila says in her foreword that this is not an autobiographical book, but that she has experienced all these places at that time. It shows. I don’t believe you can make something so real up from scratch.

The Wheel of Surya

This turned out to be another serendipitously delayed read. Why I never read Jamila Gavin’s The Wheel of Surya before, I don’t know. Maybe because each time I looked at it, I was reminded it’s the first of three, and I didn’t have the other two. Now I say, that’s easy to remedy. Just buy them. (It’s my birthday in the not too distant future. Cough.)

It’s a book about independence; both that of the main characters, but also India’s. And it’s a journey book.

First we see how hard life was for the youngest daughter-in-law in a Punjabi village in the 1930s. Married off at 13, Jhoti is the lowest of the low in her husband’s family. She is bullied by her sister-in-law and by her mother-in-law, and her very young husband Govind is away most of the time.

Her two children Marvinder and Jaspal are the same age as the children of the local, English, teacher. Life is relatively good for them, until first Govind leaves for England and a promising career, and war breaks out, followed by a more personal tragedy. Then there is unrest as the country moves closer to freedom, and in 1947 the two children end up alone, fleeing for their lives.

Their goal is to do what Jhoti had planned, which was to travel to England and find Govind. It is not a spoiler to mention that of course they make it to England, eventually. This war damaged country is far from the glorious place they had been expecting, however, and nothing is as they had hoped.

Jamila herself experienced a similar move, so has plenty of material to base her story on. It’s enlightening to see postwar London through the eyes of these beautiful Sikh children, who felt so rich when they were at home in India, despite being so poor.

Because this is a trilogy, there is more to the story than what’s in The Wheel of Surya, and the reader is left with many questions. But because this is Jamila Gavin, at her Coram Boy best, you will want to read on. And I have to admit to peeking at the blurbs for the other books.

A ‘short novel for fluent readers’

So that ought to cover me, then. I suspected I’d never get round to reading Jamila Gavin’s Danger by Moonlight, when recently I hit on my books-by-the-front-door arrangement for short and small books.

This story about jewel thieves and Eastern Princes fooled me into thinking it was for much younger readers. It looks like a very simple, young child’s book, whereas it’s really quite complex, using difficult words and being quite dark in concept. It’s just rather short at 106 pages, and not very full pages, either.

I knew I could trust Jamila to have written an exciting story, but even so, I was surprised to find that having got only halfway on what was a short train journey, I simply had to finish it at home.

Danger by Moonlight is set in the 17th century, and features a young boy from Venice who travels to Afghanistan to try and free his kidnapped father. He encounters danger everywhere, and contrary to what you’d expect in a seemingly easy read for a small child it doesn’t all go smoothly, or end happily ever after. There is a bit of Kipling’s Kim about it and some Thousand and One Nights, too.

It’s the kind of book I’d like to read aloud, had I only been equipped with a suitable child.