The King was here last week. Well, not right here visiting us, but in town. He’d been scheduled several months ago, but had to cancel when the Crown Princess gave birth to her second child. The re-scheduled date had to be re-scheduled when Prince Carl Philip became a father, and then luckily there were no more royal births and the King was finally able to come.

I’m only mentioning him here because I was thinking about author and cartoonist Jan Lööf, who has been accused of not being pc enough. There was talk about his publisher changing things in his books to pc them up a bit, or not to re-publish books, and other silly things. 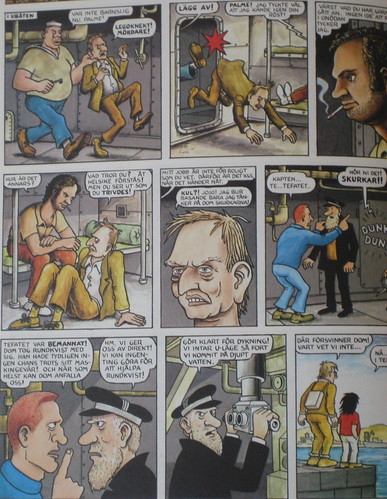 He is 76 and wrote some of his books so long ago that we’d not started worrying about pc-ness, or at least, the boundaries were in a different place. Years ago I blogged about Jan’s cartoon Ville, when the King and Prime Minister Olof Palme featured, and were the heroes of the moment. Palme got angry but the King thought it was fun. Possibly there were aliens in the story, the portrayal of whom might have been un-pc. Or not.

It’s worrying when every so often people have to pause and look at what went before and then judge it by the standards of today. That’s never going to work. If it doesn’t offend the intended readers – in this case children – it’s fine. If it’s so dated in whatever way that the children avoid the books, then that’s all there is to it. No need to make changes; you just move on.

But at least I learned a new word. Pc in Swedish is pk. Obvious, really.

The use of Prime Ministers

As I was about to hit the ceefax button to see whether the weather was going to be laundry friendly, I caught sight of David Fickling on the screen and decided to check what he was up to. Having arrived halfway, I came to the conclusion that the morning programme was talking about new comics, and in particular the DFC. David even managed to get in some free advertising by quickly mentioning the DFC website.

There was a mention of the use of Prime Ministers in comics, which I may have missed the first half of, but the consensus was that Gordon Brown won’t be appearing anytime soon. Although James Callaghan had been in one once.

This ties in very nicely with my old Swedish favourite Ville, by Jan Lööf, from 1975. It first appeared in the then weekly Coop magazine Vi, which most people got because it came with their Coop membership, but which I actually got to read. Ville was later published as a comic book, and my copy is very battered with pages torn and falling out, despite it always having been kept away from Offspring.

For me this comic was a new beginning, and I don’t think people had seen anything quite like it. The basic plot is about unemployed Ville who gets abducted by aliens, and eventually thwarts their fiendish plans. Help comes in the shape of Prime Minister Olof Palme and King Carl Gustaf.

This infuriated Olof Palme to the extent that he cancelled his subscription, which I think was a mistake, because he came out pretty well, dealing with the aliens. When the King found out, he thought it was cool. This was when he was a dashing young bachelor, and he clearly enjoyed (fictionally, at least) dressing up and cavorting around with his Prime Minister in a good old-fashioned adventure.

So some Prime Ministers are of use.