Someone I spoke to during the summer ‘knew’ where Janet Smyth was heading after leaving her job organising the Edinburgh International Book Festival’s children’s programme. We were both sorry to see her go, but you kind of accept that people need to move on, and our loss is someone else’s gain, and all that.

But it now seems that this ‘knowledge’ was incorrect, because Janet is about to start a similar role to her Edinburgh one in Bath. Which is very good news for Bath. I even feel a bit jealous that she’s going to live there. At least I assume she is. The commute from Scotland would be tough.

Janet is not the only one, though, as she will be working with Fritha Lindqvist, whom I’ve been in contact with over the years in her role as publicist, both in publishing houses and freelance. So that’s another pair of good hands for this book festival (that I’ve still not managed to visit).

I don’t like change. (Except, obviously, when I demand it…) But this sounds very promising.

The launch of the Edinburgh International Book Festival programme is the kind of event where when you squeeze past a couple of people to get to the Ladies, the people you squeeze past are Val McDermid and Jackie Kay. So you need to practise your best be cool at all times face, but I’ve got one of those. Except maybe when I arrived last night, and crawling (almost, anyway) up the stairs I came face to face with my EIBF boss Frances Sutton, and she was somewhat alarmed at my [lack of] Everest climbing skills. (I was carrying contraband, and it was very heavy.)

I arrived unfashionably early. But so did Mr and Mrs Brookmyre, whom I last saw four days ago as we left the Bloody Scotland launch ‘side by side.’ There was no avoiding Kirkland Ciccone and his selfie-taking mobile phone. But he was looking dapper, as everyone pointed out. I chatted to Eleanor Updale, and was introduced to Emily Dodd. There was a dog, too. Nice looking dog with very busy tail.

The proceedings were started by Allan Little, again, and it seems he’d promised not to cry this year, so he didn’t. He did mention it being D-Day and read a poem by A E Housman, and most of us didn’t cry.

This year the large tent will be the New York Times Main Theatre, as they are new sponsors, along with old-timers Baillie Gifford, and countless others. Also new this year will be live-streamed events from the Main Theatre, which sounds very exciting. We can, in effect, all be there. 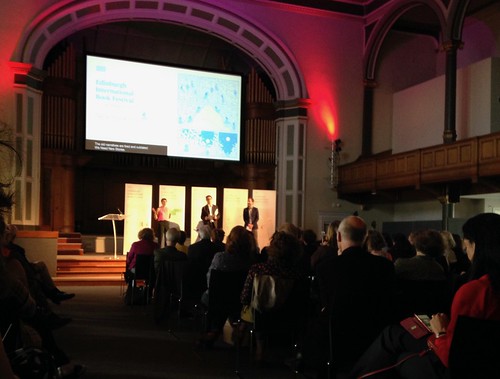 As before, the triumvirate Nick Barley, Roland Gulliver and Janet Smyth presented ‘everything’ that will happen this August. As before, that’s far too much for me to mention here, so you need to look it up yourselves. Many big names will be appearing, as will many less well known people. My own experience is that most of these events will be worth going to, be they big or small. But, you know, Salman Rushdie, Arundhati Roy, former Prime Ministers, and a First Minister. Sheila Kanani. The new and old poet laureates. Konnie Huq, Malorie Blackman.

Finishing off with some Shetland poetry featuring a peat knife, it was time for more chat and more drinks. Eventually I even came across some vegetarian sushi (but I had my own sandwiches). Found out what Emily Dodd will be doing at the festival. Chatted to Kate Leiper. And then I lost Kirkie. Started walking to Haymarket for my train.

Phoned the Resident IT Consultant to ask where I was. Seems I made the mistake I almost made last year but didn’t, and this year I had come mapless, just to make my life more exciting. (Well, it’s not every day you turn 63.) Found Haymarket. Found Kirkie, too, on the train from Waverley. He didn’t know the way to Haymarket. But then it seems neither did I. He was sitting in a first class seat, but once I’d calmed down I remembered that those trains don’t have first class. It just looks like it.

So he didn’t get us thrown off the train, and it had been a first class kind of evening, and it didn’t even rain. It usually rains on June 6th. 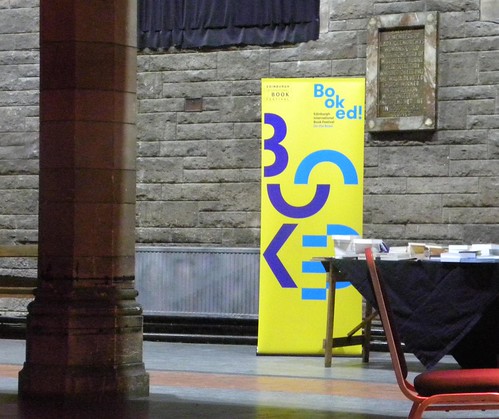 As Janet Smyth – who organises the children’s books programme for the Edinburgh International Book Festival – said yesterday, away from August and Charlotte Square it can be a lot of fun to revisit events and ideas in greater detail. So that’s what they are doing, with a programme under the [extremely clever] title Booked. What’s more, we are no longer suffering from bookfest fatigue. 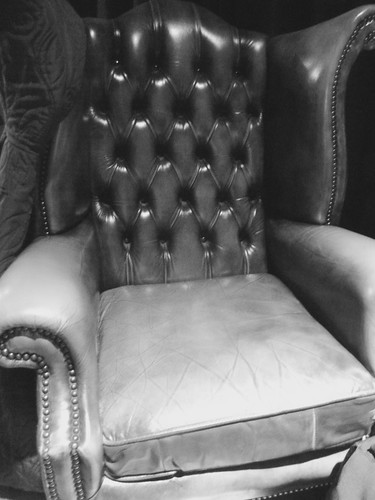 I arrived at Assembly Roxy with plenty of time, and as the first one there (I know…) I was not only given the choice of best seat, but was more or less led to the most comfortable seat in the place, which happened to be a high-backed leather armchair [with just the right support for an ouchy back] which I sat down in and then simply never left. (Feel free to copy this idea at other venues.)

My back and I had come for Elizabeth Laird in conversation with Daniel Hahn, on the occasion of her nomination as the UK representative for the 2016 Hans Christian Andersen award. This IBBY book award is a global one, which looks at an author’s whole body of work. Liz has written around 30 novels, translated into about 15 languages, and she has lived in several countries, including Malaysia, Palestine and Ethiopia.

Asked how she feels about her nomination, Liz said it’s ‘absolutely stunning!’ She spoke of having a couple of her books translated into Arabic, which led her and Daniel to talk about the way so many children’s books in English are translated into other languages, as witnessed by them at a big book festival in Tehran. And Daniel compared this to the relatively few foreign books that are translated into English.

Janet asked if you have to be dead to make it into translation, and he said yes, or you are Cornelia Funke. From his own childhood he knows that children don’t care (possibly don’t know) that books are foreign. He grew up with Moomin and Asterix, and feels that publishers worry too much about what you can put into a book, in case it doesn’t translate well, and this goes for the illustrations too. As for the difficulty of translating rhyming verse, he says that doesn’t seem to stop Julia Donaldson’s books from selling abroad.

Liz said we don’t want child characters who do what their parents say, and Daniel pointed out that’s why we have so many orphans in books. As an example he mentioned James and the Giant Peach, where the parents are killed by a rhinoceros on page one; presumably because Roald Dahl felt he had to get it over with.

Children will engage in a story, and offer hope, endurance, forgiveness and love. Liz likes happy endings, and said that she wants to write hopeful, if not happy, endings. Children’s books should be something to remember as an adult. These days we have emasculated stories, making Grimm and Noah into tame versions of the original stories, in order not to upset. 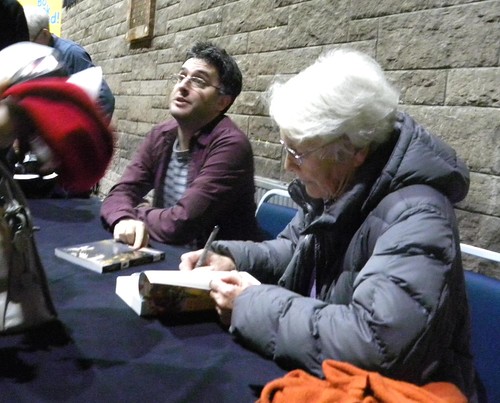 When it came to the Q&A, no one knew what Hans Christian Andersen did when he visited Edinburgh. (Did any of you see him?) Daniel reckons this keen but neurotic traveller probably worried about losing his passport, and that he would have had a rope in his luggage, just in case. And he’d quite like to be able to read HCA in Danish.

Asked for a racy story, Liz told us her favourite about the beautiful girl and her silly husband, equally silly father, and hopelessly silly neighbour.

They talked about Liz’s book A Little Piece of Ground, which is about football in Palestine, and she finished by saying she’s not ‘holding her breath’ as regards winning the award.

I think she could. Should. 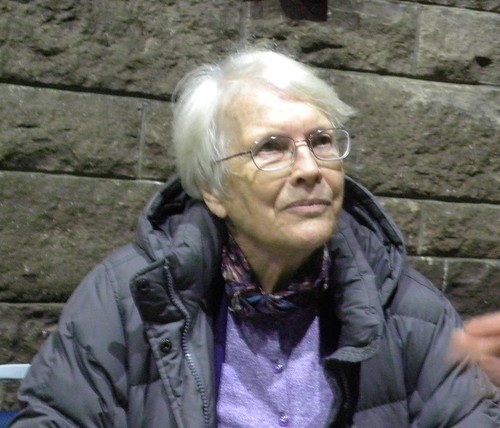 There was a signing afterwards, but not before Liz had rushed to put her warm coat on, as she must have been freezing up there on stage. I finally cornered Daniel with my copy of his Oxford Companion to Children’s Literature, ‘this lethal weapon, a nightmare,’ and it has been duly signed. 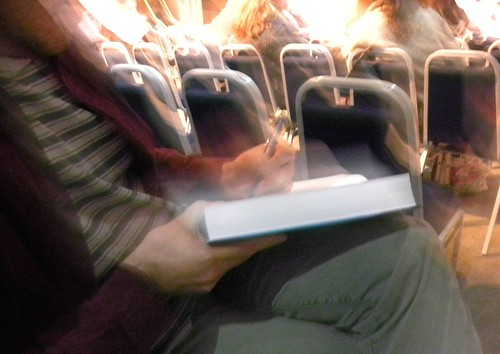