You can be odd in different ways. You can be simply odd. Or you are odd because there’s only one of you (and I think this is so unfair; you don’t always have to be a pair).

Or you could be a [toy] lion called Rory, who always waits for a bed time story from his friend, the little girl. 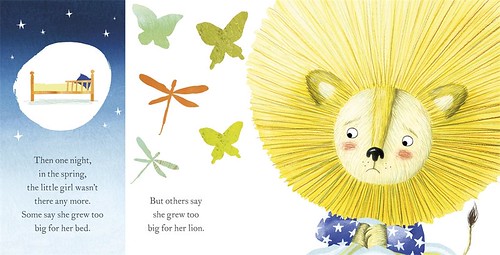 We have a lovely small lion in Jeanne Willis’s Tell Me a Story, Rory, with illustrations by Holly Clifton-Brown. Rory has a large mane for such a tiny lion, and he lives for his little girl’s stories. Until the day she goes away. Little girls eventually stop being little.

There’s nothing else for it. Rory has to tell himself a story.

As for Simon Sock in Sue Hendra’s and Paul Linnet’s story by the same name, with rather stripey pictures by Nick East, he finds out he is odd. That’s why he never gets chosen from the sock drawer. You have to be one of a pair. (Much like in life!) 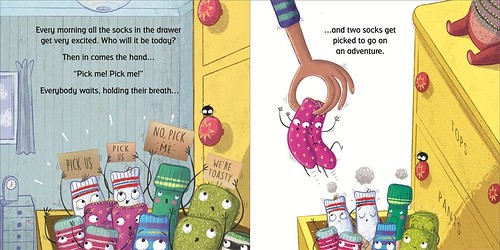 Simon starts looking for a mate, but there’s something not quite right about them. Until he does find his very own mate, Simone, who’d been missing under the chest of drawers. But she wants to watch television, so it’s not a happy ending for them.

Until… Betty the Banana offers to come out and play. You can be odd, but still not odd.

My Photographer – aka Daughter – was here over Easter. This meant I could take her to do the honours at Lari Don’s event, leaving me not only with free hands to take notes, but with some much better photos than I can take.

Once upon a time I had her services, if not always, then quite often. She was even prevailed upon to pop back home from school for half an hour if I had an author interview in the house. It was very handy, and I hope not too cruel.

We made our Edinburgh bookfest debut soon after her GCSEs, with a new, proper camera and everything. The press photographers might have found it strange to share turf with a teenager on her school holidays, but they could learn a thing or two from her, I reckon. Because she took pictures of authors the professionals didn’t. By that I mean mostly children’s authors, but also others of ‘lesser’ interest.

In fact, what the professionals do is wait to be offered people, a bit like when children wait for an adult to give them their tea. Whereas we ended up sticking our noses into every larder and fridge we came across, to keep the meal metaphor going.

Last week I asked if she’d seen the ad on facebook for an author event, where they had used her photo. And yes, she did see that. They’ve paid for it, so can use it for anything they like. It’s one that the author particularly liked. That one came from an official photo shoot, but there have been others that have pleased the subject enough to want to buy the rights. And that’s because we’ve been everywhere, and sooner and later you just catch the right look, especially since they don’t know they are posing.

The sales have been priced somewhere between professional fees and giving them away; enough for a schoolgirl to pay for the lens sold her by another author. When the author pays, a cheque is likely to turn up soon. When the publishers pay you tend to have to send quite a few reminders.

One author who just happened to be snapped by my Photographer in the official photo shoot area and thereby got caught by the professionals as well, was later offered to buy a series of shots by one of them. It was illuminating how much he asked for. Unfortunately for him, this author had already been permitted to use Daughter’s pictures. Besides, I suspect the money wasn’t there. Several years on, it was satisfying to find one of those photos in a press release I received last week.

The difficulty has never been finding authors to take pictures of. It’s mainly been a case of coming up with somewhere to do impromptu, more private, photo shoots of our own. 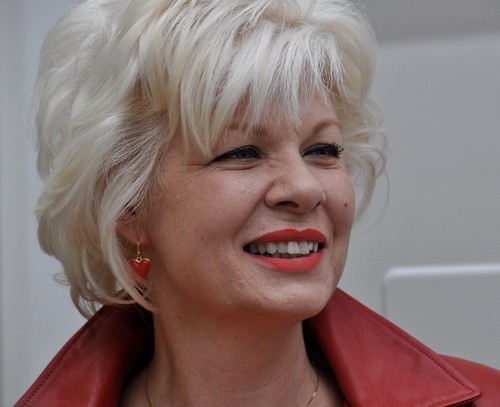 We know who we like. And that’s not generally the latest Nobel prize laureate or Booker winner, but someone much more important. Someone who writes for children. Someone who gets them reading.

I just wish adulthood didn’t deprive me of this wonderful service. The Photographer’s, I mean. I’ll never be adult. 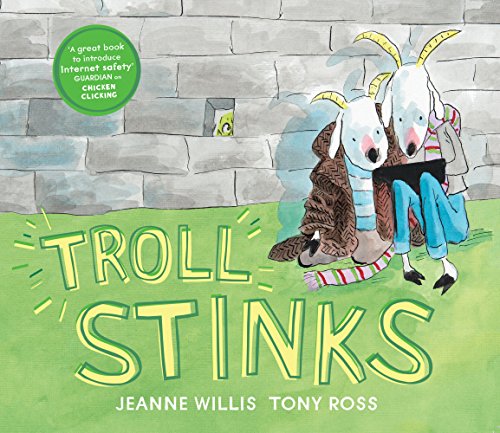 It looks like Jeanne Willis has her heart set on educating young readers, and what better way than through poetry and catchy illustrations?

This time Jeanne and Tony Ross are tackling cyberbullying, and high time, too. (It ends better than Chicken Clicking, in case you’re worried…)

Jeanne rhymes her way through a different version of the Billy Goats Gruff, where a young silly Billy  finds a mobile phone and decides to get up to no good with it, along with his friend. They take selfies and send horrible text messages to Troll.

And then they go off to visit Troll. Aren’t they brave?

Well, no, they are bullies. The thing is, just as goats – maybe – have the right to cross bridges; perhaps trolls are entitled to try and prevent them?

Lucinda Belinda Melinda looks really nice, but that’s all that’s nice about her. This perfect girl in Jeanne Willis’s new picture book, illustrated by Tony Ross, is pretty dreadful. She knows how to look good, and she not only tells everyone else how to improve, but she goes right ahead and improves them.

People hide when they see her coming. Lucinda Belinda Melinda even has a go at her poor grandparents, who are not well-groomed enough. And she blow-dries the monster she meets in the park.

Well, she shouldn’t have done that… 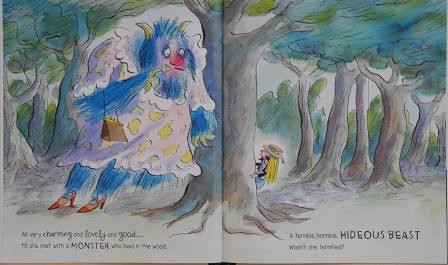 This is poetry. I really wanted to read the book aloud, but as usual was missing that child who would have loved it. Not sure the Resident IT Consultant wanted Lucinda Belinda Melinda to intrude on his history programme on television. But it just rhymes so very nicely!

And yes, my bottom does look big in those shorts.

Jeanne Willis, butter and how to draw a cow

While we’re in a farmyard mood, I was quite pleased to find the two page advert for butter in the Guardian Weekend the other weekend. Surprised, but pleased, because it featured a large photo of Bookwitch favourite Jeanne Willis. 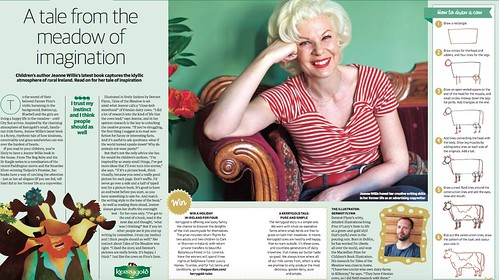 It left me slightly confused at first, but I gather Jeanne has written a buttery sort of children’s book about some Friesian dairy cows, called The Tale of City Sue, which most likely isn’t going to pop up in ordinary bookshops, and I don’t actually know how or where you get hold of a copy, but I do hope it ends up in the hands of many children.

Perhaps if their parents buy the right kind of butter.

It’s been illustrated by Dermot Flynn, and he offers a short lesson on how to draw a cow. I feel even I could now draw a passable cow if I needed to.

The question I am left with is whether it’s all right to write a book for advertising purposes. I think it probably is. Just the other day I was reminded of the Weetabix atlas (simply because there is still a copy of it in Mother-of-witch’s bookcase), which was pretty good. Offspring must have been at the right atlasy stage when it was available to people who ate plenty of Weetabix. We had so many tokens to use (we saved them when there was nothing we wanted, and then used them all when there was something good to order) that we got a pile of atlases for school as well.

I think what I’m saying here is that Offspring did ‘read’ that atlas a lot, and that any book that comes to a reader and is appreciated is good, even if you do have to eat Weetabix, or butter. In our case it’s not even as though we didn’t buy books, but we felt it was a good offer.

So if I could just lay my hands on The Tale of City Sue, to read about this close-knit sisterhood of dairy cows…

Bluebird by Bob Staake is a rather special book. Longer than average and wordless, it still tells a marvellous story. The illustrations are something else, and all in tones of blues and neutrals. I’d happily frame a page and put on my wall.

Set in New York, by the look of things, it tells the story of a lonely boy, who is befriended by a small bird. There is bullying and a sad, but beautiful ending. Wonderful to look at, and if you can adapt your own words to your own child it should suit almost everybody.

In Chicken Clicking by Jeanne Willis and Tony Ross, we meet another little bird in this tremendously yellow book. The chicken pops into the farmhouse to use the farmer’s computer every night. She buys things, thus confusing the poor farmer. 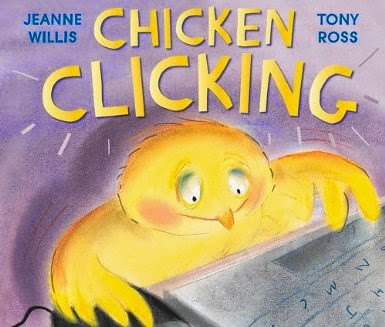 And then, then she makes an online friend. This is a cautionary tale about online safety. You just never know who will pretend to be your friend. Do you?

This chicken finds out…

Three picture books, all about animals who are long and narrow.

It’s poor Boa’s birthday and all he wants is a nice present or two. But can he play the piano? No. Or wear mittens? Sunglasses? It’s the thought that counts, according to his mum. But he’s still disappointed. Until one friend gives him something… Boa’s Bad Birthday by Jeanne Willis and Tony Ross is as enjoyable as you’d expect. Jeanne knows how to convey feelings with just a few words. And a boa with tears in his eyes? Well.

In Where Are You, Banana? Roddy somehow loses his dog called Banana (dachshund, I’d say). The family look everywhere, but no Banana. Not until Roddy hears a noise and looks more closely so he can see where Banana has disappeared. How to get Banana back, though? Lovely story by Sofie Laguna, and great illustrations by Craig Smith, which convey a boy’s love for what is actually a fairly ugly dog.

Finally we have the true story of the giraffe in Africa who became a gift for the King of France. The book follows Zeraffa’s journey from Egypt to Paris, a trip where everyone comes to see this strange animal as it passes through. They all love Zeraffa, and none more than the Princess in Paris. And on warm evenings, if he looked south, Zeraffa could almost imagine himself back in Egypt.

Rather sad, really, and so strange you would barely believe it actually happened. Exotic illustrations by Jane Ray accompany Dianne Hofmeyr’s words.