Having successfully got rid of one of my favourite pieces of furniture, I have enjoyed being able to get in and out of the kitchen unhindered. We only blocked off access because we were under the impression someone would soon relieve us of this very versatile bookcase. And then it turned out to be too small for a collection of really large family bibles, but too big for most other people’s needs or homes.

But if at first you don’t succeed…

Yesterday I had a teenager sitting at my dining table, reading a book by that very scariest of men, John Ajvide Lindqvist. I approve, though. Both of the reading and the fact that she brought a Swedish book to my house, and I admire her courage. She finished it while here, and sighed deeply because she couldn’t immediately move on to the next book.

This is the disadvantage of translations. You have to wait for them to be made. I suggested a quick language course to solve her problems. 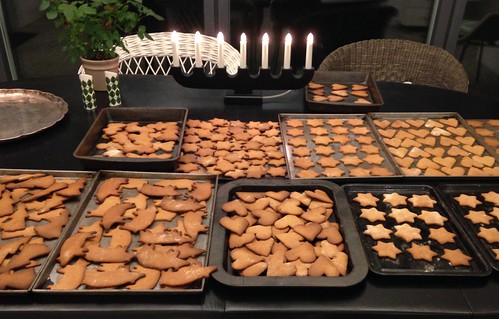 The reason she came here to read, was so her mother and I could eat ginger biscuits and talk about books, putting the publishing world to rights. Someone has to.

And I do like a woman who will quickly eat a few more biscuits as she gets ready to leave.

When I feel really confused I believe that one of Helen Grant’s bookcases is a fireplace. But apart from that I am completely normal.

(It’s because it looks a little fireplace-ish. More than mine, anyway.)

The Resident IT Consultant and I enjoyed looking through Helen’s shelves when we were waiting for her to get lunch ready the other week. (She had declined my help. I let her. That’s the kind of visitor I am.) They are shelves that anyone would enjoy browsing for unexpected – or for that matter, totally expected – books. We flitted from side to side, since there was no discernible system. Lovely.

They are nice bookcases. The furniture, I mean. Dark brown. Not too plain and not too ornamental. Just right. And one of them sits where the fireplace would be if there was one. Hence my understandable memory lapse. As befits a proper library, the room boasts leather sofas. And cats.

I am sure that Helen, or the younger Grants, own every one of the Harry Potter books. But they are so nicely spread out that you could never accuse the family of believing in alphabetical order. The HPs are not even in the same bookcase, or along the same wall!

And they have at least two copies of a book about witches and magic. Either they don’t know this, or they need both. I felt suitably appreciated, anyway. There are books by Johan Ajvide Lindqvist, or what I call horror of horrors. Someone likes outdoorsy books. They have books on food. On health. And, er, some by Helen Grant.

Some books stand in front of other books. In other words, the Grant book collection is very, very normal. I suspect they haven’t acquired books with an eye to what others will think. Which is just as well, since when they moved (I have forgotten now if it was to Germany or to Belgium) their new neighbours asked why they’d bothered dragging all those old books with them.

Beware button mushrooms in the woods. Especially if out of season.

I haven’t exactly taken up translating books, but Son has to do ‘practise runs’ with all manner of written stuff. And then he runs them past me. He calls it proof reading.

So, very recently he had to do the beginning of John Ajvide Lindqvist‘s Little Star, and I read it. The beginning, not the whole book. I thought it looked good. Excellent start to a novel, catching your attention. Except then I stopped and thought, and reasoned that even if it was quite exciting that the fake button mushroom turned out to be a baby buried alive, this was a book written by the man who gave the world Let The Right One In.

There was no way I was going to hang on to see what happened to the mushroom further into the story. Although I did look on amazon and I can’t say the synopsis filled me with a warm and happy glow.

On the other hand, I got a little more background, so some of the weirdness I’d encountered was explained. The man singing about ten thousand red roses. I mean, that’s not strange to me. I have it on iTunes. But I’m not sure how much sense it makes to the English language reader. If you need to know who the other singer referred to is? Footnote time, perhaps.

The singing character will wish he’d left the button mushroom right where he found it. Stick to chanterelle sandwiches. Button mushrooms can so easily not be what they seem. Deadly.

Anyway, who is he to say he can sing about roses better than the great Christer Sjögren? Stick to chanterelle sandwiches. Maybe it has no bearing on the story, whether you know the song, or the singer. But a very little something will be lost in translation.

With hindsight I’m fairly sure the type of mushroom is not important, either. Except if you need to visualise what this singing star is seeing, a button mushroom might be what you know best. (Son went for another term for the mushroom, which I think was wrong. Botanically it could be more correct, but for the novel reading public who can’t tell a toadstool from a chanterelle – except you really should – it won’t be helpful.)

I’m certain many of you Nordic book lovers will thoroughly enjoy Little Star. I’ll go for the mushroom sandwich. And maybe the roses.