I’d like to think that one day some of the young people who read Anne Cassidy’s Thicker Than Water will come across Steinbeck’s Of Mice and Men; either the book, or more likely, the film. And then they’ll think, ‘oh that’s rather like Thicker Than Water.’

Because it is. For her most recent Barrington Stoke book Anne wanted to write a modern take on the book she’s always loved. And it’s surprising how much you can write something that is the same but also quite different.

We have George and Lennie, who are moving between south English towns, from Brighton to Hastings, looking for work, and George hoping that this time Lennie will behave and not cause trouble. Just like in Steinbeck’s book this George looks out for his large, but simple, friend Lennie. 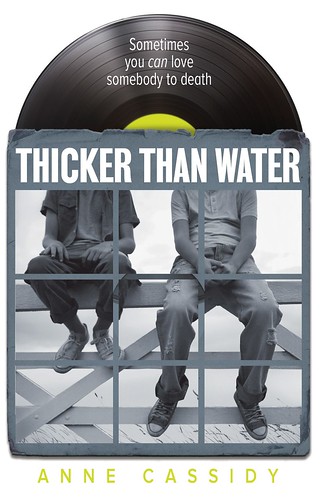 This story is set today, with mobile phones and things, and George works as a DJ. Or tries to, when Lennie will allow.

It’s a beautiful story. Violent, yes, but there is so much love. If you know Steinbeck you will know how it ends. If not, I’m guessing the ending will come as a shock to young readers. It’s what makes this book so grown-up, and a perfect homage to John Steinbeck.

The Hardened Librarian (she’s really Den luttrade bibliotekarien) was blogging about what put her off reading when she was at school. It’s a relief to hear that others – even librarians – feel like that. I know I was certainly put off some books, and authors, by well-meaning teachers.

To some extent ‘all’ Swedish literature got to me. But as with so many things when you are growing up, you don’t know that what you’re experiencing isn’t normal. I must have assumed that in becoming an almost adult I simply had to read adult and ‘proper’ literature, and by definition it would be, if not boring, then not as riveting as it ought to.

Why should it be natural to move from exciting books at twelve, to adult boredom at 14? We’ve already established that in my day we had none of the YA. Hence the sudden move to adult classics. I wonder if (Swedish) schools today serve up more teen oriented reading material? Or do teachers pick adult books because they have forgotten already? Or because it’s the only ‘right’ thing to do?

I believe THL and I must be about the same age. We both read, and liked, Nevil Shute and John Steinbeck. Note that these two authors lack in Swedish-ness. I have never read many adult Swedish books. But I have friends who did, and do. I even have friends in the UK, leading English-speaking lives, but who wouldn’t dream of reading in English. Me, I always felt I was destined to come here, and to read books in my other language.

A few years ago when I interviewed Tim Bowler, he mentioned his favourite Swedish writers, and I didn’t dare admit that I didn’t agree with him. (Sorry!) Maybe I should get Tim and THL in the same room and they could discuss Pär Lagerkvist. Could be interesting.

The stupid thing is that I was so taken by the idea that I had grown up that I continued reading all this adult, but oh-so-boring stuff. I wonder why? Just think what fun I could have had in better company.

What puts English speaking teenagers off? At least many of the classics – albeit long – are reasonably interesting and readable. Though I’m grateful I saved Austen & Co until my twenties. I suspect I was more receptive to lengthy romances by then.

In the UK it seems to be customary to know which football team people, including your teachers, support. I think I can do a literary sort of line through my various teachers, showing the favourite author for each of them. When Heinrich Böll was awarded the Nobel, I read his most recent book. My German teacher adored Böll. I read several of his books. I am fairly sure I didn’t like any of them. Why did I do it?

I suppose it’s a good idea to try new writers, and not be too prejudiced. But to continue the punishment once you’ve established you don’t like someone’s writing, strikes me as madness.

I know it’s an inappropriate thought to have, but thank goodness our school hall burned down! When the witch was a 12-year-old witchlet, the new assembly hall at her school burned down. Looking back, I can see how lucky we were. It decided to burst into flames on a sports day when we were all somewhere else. And because it was ‘just’ the hall, the rest of the school could continue operating and we weren’t messed about with.

What it meant was that we couldn’t have full school assemblies every morning, so instead we had class assemblies in the classroom we were in for the first period of the day, with our teacher for that lesson. So a whole host of teachers suddenly had to come up with worthy ways of ‘entertaining’ us every morning.

My all time favourite teacher, Mr Nyström, read to us. First he read The Canterville Ghost by Oscar Wilde. He was excellent at doing voices and must have been an actor at heart. He then went on to give us Three Men in a Boat, and I still can’t read it without hearing his voice.

I don’t remember how long the hall was out of circulation, so there may have been more books, or maybe Magister Nyström moved on to other entertainment. The point is that he gave us books that we would never have thought, or known, to read ourselves.

My Swedish teacher at the same school spent one lesson a week reading to us. Again, this bunch of 13-somethings would never have considered reading John Steinbeck, but we all enjoyed The Pearl. The trick here was that both teachers chose adult books, but easy ones. We had barely grown out of traditional children’s books, but were ready to discover other things, even if we didn’t know it.

So Alan Gibbons’ most recent newsletter for The Campaign for the Book which deals with all the teachers who don’t read, came as a timely reminder of what’s important. It shouldn’t be necessary to have something called ‘In defence of reading for pleasure’. He lists the results of a survey:

‘Teachers “never read a whole book”. One in eight teachers has never read a book to their class, research has revealed. Almost 600,000 children could be missing out on great stories and failing to develop a love of reading because of the use of book “extracts” in the classroom, it suggests.

The study, commissioned by educational published Heinemann to mark the launch of reading programme Literacy Evolve, highlights teachers and parents fears that a lack of whole book reading is affecting pupils academic performance. It found 12% of teachers say they have never read a whole book to their class, while the same proportion say they read just one book a year.

Almost eight in 10 teachers (78%) say the use of “bite-size” extracts reduces the thrill of reading, with half saying that they know of an occasion where a pupil lost the thread of a story because they were not read the full book. The Lion, The Witch And The Wardrobe, by CS Lewis, Treasure Island, by Robert Louis Stevenson, Good Night Mr Tom, by Michelle Magorian, and a number of Roald Dahl books were cited as novels in which children failed to grasp the story.

Former Children’s Laureate Michal Rosen said book extracts deny pupils “the meat of the story.” He said: “The idea that children can’t manage whole stories or whole books is a nonsense. No extract in the world has the power of books.” ‘

Alan goes on to comment  ‘This report makes disturbing reading. Our education system has been moving ever more rapidly towards a functional approach. There is even an Orwellian strand called ‘functional English’ as if that has any meaning. Language is fundamental to human society. We do not interact in any sphere of life in a purely functional way. A good shop assistant swaps anecdotes with his or her customers. A good teacher engages his or her pupils with anecdotes. The best business people are as creative as a novelist, poet or journalist. To be successful in the modern world you have to be flexible, creative and literate. Interestingly a high proportion of truly original movers and shakers have got where they were without going to university or even having much of a formal education. Almost all of them developed a love of reading for pleasure. Schools don’t have to be test factories. They can become places of enquiry and broad cultural development. What better way to achieve this than by being immersed from a young age in great oral stories, poems and books?

Tragically, the world has been taken over by the latter day Bounderbys and Gradgrinds. Many children come into school with a significant literacy deficit. No amount of booster classes or remedial groups will address this without making the project of reading and writing fun. Every child should be read to at home and at school every single day. Anything less is a betrayal of a generation.’

There are teachers who manage to read, despite the dreaded National Curriculum hanging over their heads. So more teachers could do it.

The teacher at Daughter’s secondary school who started up a lunch break reading club quickly forgot it was extracurricular fun, unfortunately. So in the end it was more of a turn-off than enjoyable. I know there are many ‘horrible’ school children, but how about forgetting to tell pupils off some of the time?