In just two weeks’s time Book Week Scotland will be upon you, at least if you’re in Scotland. Otherwise Scottish Book Trust’s powers might not reach all the way to where you are. But it won’t be for want of trying.

Many events are for schools and not public, but I have found a few I like the look of, and were it not for my vow of not stirring ever again, I’d head off for some of these.

Top choice is obviously Mairi Hedderwick in Helensburgh, when it’s Party Time with Katie Morag on Saturday 26th November at 10.30. It hits the right spot for me in so many ways.

Jonathan Meres is a very funny man. His show May Contain Nuts at Fauldhouse, West Lothian, on Wednesday 23rd at 9.30, should be great. If you can get out of bed that early.

Children’s Book Swap with Alan Durant in Strathpeffer on Friday 25th at 15.00. Get rid of books you don’t want, and choose someone else’s unwanted books instead…

Stories by Starlight in Inverkeithing on Saturday 26th at 16.30. How they can be so sure of stars I am not, ahem, sure, but it sounds good.

A Beginner’s Guide to Electricity and Magnetism. Well, what could be more fun? That’s Gill Arbuthnott and Nick Armstrong in Fife on the 24th at 18.30.

John Fardell will be in Orkney on Saturday 26th at 10.30. Lovely, for anyone already up there.

Tom Nicoll: Writer of Nonsense! (and Mini-Dragons) entertains in Airdrie, also on Saturday 26th at 11.00.

Badger the Mystical Mutt and the Loch Ness Mystery (and Lyn McNicol) are in Glasgow on the 24th at 11.00. (Actually, make that the 26th! See Lyn’s comment below.)

City Lines featuring Chris Brookmyre in Glasgow on the 22nd at 19.00. 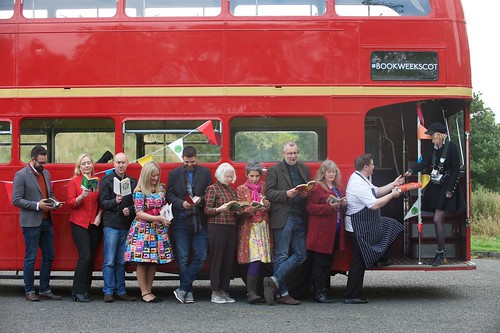 And number eleven is a Book Trail in Edinburgh’s St Giles’ Cathedral, every morning Monday 21st to Saturday 26th at 10.00. Clues to be found to win a prize.

It’s enough to make me wish I still travelled to St Andrews regularly. I know I can still go, but the other end of Fife is just that wee bit too far, even for me. At least when I feel all travelled out and all that. 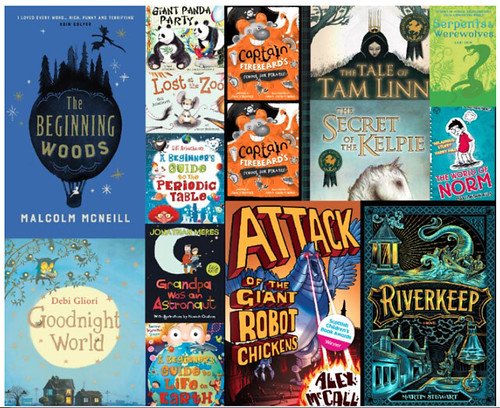 Toppings, the bookshop that opened a branch in St Andrews a couple of years ago, have taken up the book festival baton, after the closing of the theatre. And that is very nice of them, and good for the town. There are a few children in St Andrews. It’s not all Royal Princes and students.

So, this week is their Wee Book Fest, which I believe means it’s for the wee ones, not that it’s all that wee. They have a programme for the whole week, which is ambitious for a smallish town. And most of the programme looks good, and some of it so tempting that I almost got the train time table out to see if maybe perhaps I could go after all. 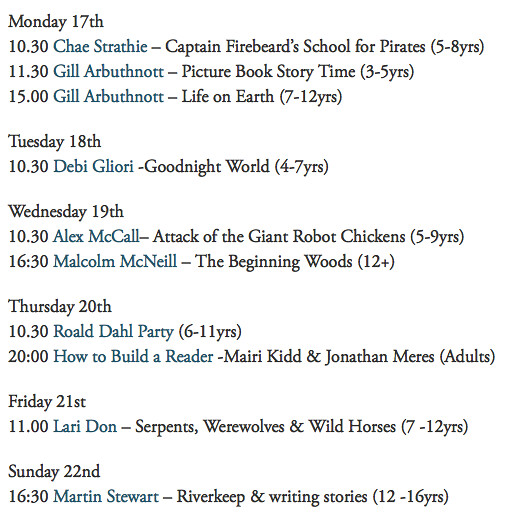 But then I told myself not be silly and that I can see most of these authors somewhere closer and more convenient some other time. Probably.

It does look good, though, doesn’t it?

In the end it didn’t matter that I went to Dundee the wrong week. I was able to ‘sort of’ be there yesterday, anyway. It was WBD. It was time for the Scottish Children’s Book Awards at Caird Hall, filled with a thousand children (so there might not have been room for me). And they very kindly filmed the whole shebang and made it available online. Thus I watched it all from the comfort of my own desk.

They had that Chae Strathie in to do the host stuff. Apparently when he didn’t win last year he sulked until they offered him this job instead. He was very noisy, but he was a competent MC. Perhaps a few too many ‘yoohoos.’ That’s all.

The shortlisted authors were lined up on stage and then sent off again. Seems they have some kind of authors’ enclosure where they are kept. There was a band with such an odd name I can’t tell you what they were called.

For the Younger readers category they had written little theatre sketches based on the three shortlisted books, which were performed by school children. I am fairly intolerant of this type of thing, but have to admit this was first class stuff. Very well done.

Jonathan Meres won with The World of Norm: May Contain Nuts. His thank you speech turned out to be his shopping list; tea, milk, etc. (But at least he was English… I was beginning to think you had to have a beautiful Scottish accent to even make it onto that shortlist.)

Scotland has a minister for children! Aileen Campbell was there, and made a good speech about the importance of books and reading. I suspect the Scottish government might have more sense than Westminster.

For the Bookbug category we got story time, and then the Children’s Laureate sang her book, and finally John Fardell drew pictures of scary monsters. He finished with a giant rabbit with horrible teeth, before winning the Bookbug prize for The Day Louis Got Eaten.

To make life easier for the Older readers category, Barry Hutchison became Elizabeth Hutchison, so he wouldn’t feel like the odd one out, sitting as he did, between Elizabeths Laird and Wein. They had to answer questions. Ms Hutchison has no shed, which is sad. (S)he likes horsepie best. (Dundee delicacy?) Ms Laird told us to run downhill if ever attacked by elephants, which is something that has kept me awake at night, so I’m very grateful. Ms Wein opted to go to the South Pole in the company of a ‘Norwegian who knows what he’s doing.’ Sensible woman.

While this was happening, Chae wore an outlandish gold jacket, two sizes too small. And then they danced, Gangnam style. I’d have to say Ms Wein did that far better than her namesakes. (She is an American, so clearly you don’t have to be Scottish to be there.)

But it helps, because Barry Hutchison won that category for The 13th Horseman. His speech was mercifully short. (He’d had a busy day the day before. Maybe he was worn out.)

Chae finished off by saying he loves us all.

Love you too, Chae. Great event!

*I borrowed that dreich quote from Barry. I’m sure it wasn’t really dreich, but I just love that word! Maybe the weather cried because I wasn’t there?

Fearing I might not be able to bite you this weekend, I will give you a mixed bag of stuff today instead.

Fear. Yes. It’s the done thing. Meg Rosoff blogged the other day about all the dangers of going to the library. Is it safe now to admit to having omitted to fit a stair gate when Offspring were at their most vulnerable? I am a coward most of the time, but there are some things I feel you just need to risk, or we risk (hah) losing sight of common sense. I eat old food, too.

And I am afraid I daren’t say anything about this rather excellent shortlist for the Scottish Children’s Book Awards 2012. The three books for older readers comprise one author whom I admire a great deal (Elizabeth Laird) and the other two just happen to have written what must count as my bestest books (so far) this year, even outside Scotland. That’s Elizabeth Wein (odds that an Elizabeth wins?) and Barry Hutchison. And I see that even more favourites narrowly missed the shortlist. They clearly need a longer shortlist. Or more awards.

The younger shortlists (you know what I mean!) are also full of jeopardy, with people being eaten and there being nuts, soldiers, crocodiles and lions.

A man who lives dangerously is Tony Higginson of Formby Books. He works too hard. Now he has added to his burden and blogs in his spare (double hah) time. Double danger there next Thursday (and I’m telling you now because I plan to be busy for a while) when he has invited customers to a crime barbecue. I mean, books and flames! Stephen Booth is the one who will be flambéed. Or was that the burgers?

This is assuming Tony makes it through his day. I believe I have counted three more events he’s doing that day, which is the day I already have so much on that I am wondering if I can crawl out of bed for the piano tuner at the crack of dawn. I suppose, take one event after another… But no trips for me to the coast and Tony.

Next year I’ll send out dates when I’m available.

It just appeared there in the corner of my eye. Not literally, obviously. But as I meandered through the children’s bookshop at Charlotte Square, mentally ticking all the books I had read or already had waiting for me, I noticed one I didn’t know at all.

Our City is an anthology in support of the OneCity Trust, just like the adult crime anthology I read a while ago. They clearly know what they are doing, getting great authors to write short stories for free and publishing them for the good of Edinburgh’s less fortunate inhabitants.

Ever the autograph hunter I couldn’t help noticing that five of the ten authors were at the book festival, and that in itself seemed like a good start. Reader, I bought the book. The only one I bought. And it’s a good one.

Julie Bertagna, Cathy Cassidy, Alison Flett, Vivian French, John Fardell, Keith Gray, Elizabeth Laird, Jonathan Meres, Nicola Morgan and Alison Prince have all written a story that has something to do with Edinburgh. That in itself made it the best possible souvenir from the festival.

John Fardell has illustrated not just his own cartoon contribution, but the stories of all the others and also the front cover. It’s the sort of cover that had me turn the book round and round, as John has drawn a circular Edinburgh, with all the bits from the stories fitting neatly together. So you can twirl and twirl, and then you fall over.

There are historical tales, a story about witches (what else?), a sad story, an almost political story, a traditional fairy tale, and science fiction even. They are all marvellous in their own way. I liked the pied piper. I enjoyed the sad bus story. The smiling alien was good. The cruel stepfather was interesting. How to beat the school bully. Cathy Cassidy managed to incorporate her friendship bracelets into hers. And then there’s the witches. Nice ladies.

I love anthologies. Especially when they are made up of the right kind of short stories written by my kind of people. And this charitable type of effort is a wonderful idea. I was going to say we need more of them, but I suppose if you have too many the idea stops working.

But is is a good idea.