Of dung beetles and other creatures

I miss those dung beetles. And the dinners.

When I got in touch with Gill Lewis a few weeks ago, after having reviewed her most recent book, Gill said she’d just re-read my post about the dung beetles. And because I had reminisced about the Salford book award dinners shortly before it, I re-read the post as well. Had forgotten them, but never the man who suggested writing a novel about dung beetles; Jamie Thomson. Crazy, but lovely, man.

And that was the point; the reason I had been thinking about the dinners and missing the diners. Despite me wondering if I’d gone mad each time I set off to meet another batch of half unknown – to me – authors for dinner, after having emailed them out of the blue to suggest we meet up.

Those dinners were successful, perhaps because we were a bunch of ‘strangers’ getting together. We weren’t strangers afterwards. Strange, maybe. (Remember the dung beetles!) So in hindsight I’m really very grateful to the Salford book award organisers, for having no evening plans for their visiting authors.

It was one of the things I wanted to take with me when I moved. But around here most visiting authors are well looked after and don’t need a witch to make overtures and suggest meals out. Shame, really…

You can thank me when that bestseller about dung beetles appears.

Reading the latest Dragonsitter book I was engulfed in a warm glow. Not because Josh Lacey’s dragons breathed fire on me, I hasten to add. I just love these books. Short – and funny – enough to entice any young reader to enjoy themselves, and the right length for me to drink a cup of tea and eat two potato scones. 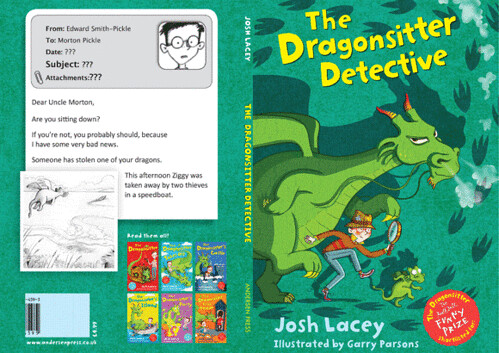 And don’t you just love a wedding? Eddie’s mum is finally marrying Gordon, and they’ve all travelled up to Uncle Morton’s island for the great day. Morton is away, as usual. This time he’s hunting the Kraken from a submarine. But he has to give his sister away! And make a speech!

Unfortunately both his dragons are stolen, and it is down to Eddie to find them again. He is a good boy, so he does. And the wedding is only slightly delayed.

I never did find out if Eddie had to wear a kilt.

The Dragonsitter: Trick or Treat?

Josh Lacey and Garry Parsons are back. This time their lovely dragonsitter has Halloween trouble. Edward needs to borrow the dragons from his uncle, because he needs to win a fancy dress competition, to win a computer because their old computer is very old and won’t live much longer. 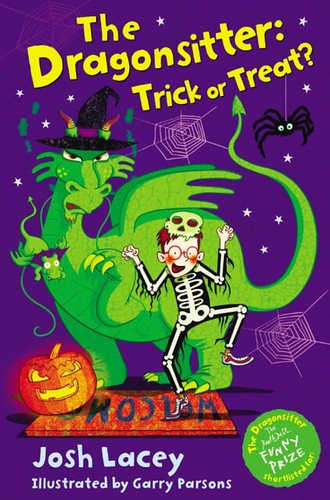 And for once Uncle Morton agrees and is ‘helpful.’ Not that the man ever is entirely helpful, as he still thinks of his yetis and stuff. But there is romance and ingenuity and plenty of mishaps, just as you have come to expect from a Dragonsitter story.

Every time I begin a new one I can’t see how Josh can milk this dragons and mishaps thing any further, and every time I am proven wrong. There is always something you can do with dragons. This time it’s mainly young Arthur, and he needs to poo. But will he?

Not Arthur. He really can keep it in.

But it’s quite amusing what happens as we wait for the poo.

The Dragonsitter to the Rescue

It’s the hotel’s fault; if they don’t want your dragon to come and stay, they shouldn’t say dragons are free. And they probably wouldn’t have, if they had an inkling that the very same dragon had just ruined its previous hotel, elsewhere in London. 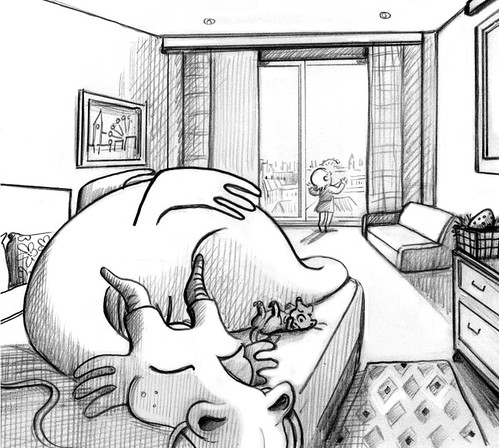 Dragons do. They don’t mean to, but it happens. They are big, and hungry, and they breathe fire. And if you’re a mummy dragon and your little Arthur is lost somewhere in London, you will do anything to get him back.

So will Eddie, in Josh Lacey’s latest Dragonsitter story. I think it might be the best so far (unless I say that about all of them, in which case it’s simply that they are all so wonderful that I get taken in by their charm), and I really enjoyed holidaying in London with Eddie and his sister, and their slightly useless dad, while their mum is romancing in Paris.

This was my second dragon book finished in one day. The other one was a longer, fantasy novel, whereas I’d label the Dragonsitter books as normal dragon stories. Totally realistic, and not fantasy at all.

Eddie’s happy-go-lucky uncle Morton is off looking for Yetis in Tibet, having left his two dragons in the tender care of his nephew. Once more, I should say. He always manages to be incommunicado, as poor Eddie tries to sort out the latest dragon happenings.

(Would I love Ziggy and little Arthur so much if it weren’t for Garry Parsons and his illustrations?)

‘Never take popcorn from a dragon.’ Obviously. And when you find a babysitter who ‘does pets’ you shouldn’t assume she will do dragons, especially if they get annoyed at having to share the popcorn. 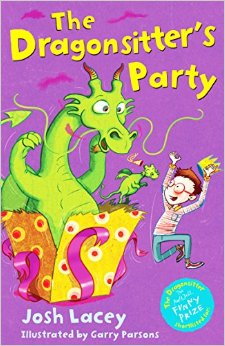 We are back with Eddie and his family, and the dragons. Who just happen to turn up for Eddie’s birthday party. Eddie’s mum is still very much in love with Gordon, so she puts up with him having brought the dragons, although, as I said, it’s hard to go out for a romantic dinner when the sitter doesn’t do pets. Or dragons.

They have a magician booked for the party. Who needs a magician when you have an univited dragon or two? The magician arrived with a trained rabbit, but it’s safe to say he didn’t manage to leave with it. The guests thought it was the best party ever.

Eddie’s ever absent Uncle Morton is helping with the lambs (since Gordon is busy wooing Eddie’s mum), and fails to turn up to relieve them of his dragons, yet again.

I love these books, and I have high hopes for the future, considering what Uncle Morton gave Eddie.

An egg. And I don’t think it was an Easter egg.

I love Nessie. So I was rather perturbed to find that in this latest Dragonsitter book by Josh Lacey, the Loch Ness Monster (because it is she) is the bad guy.

Someone is eating the sheep, and we know it’s not Ziggy. Or baby Arthur. So I suppose it has to be Nessie (or Josh simply got it wrong). Perhaps this is Nessie’s evil twin/cousin, or something.

That detail aside, this is as much fun as all the other Dragonsitter books. This time Edward and his family have gone to Uncle Morton’s home, on a Scottish island, to mind the dragons while he’s off ‘somewhere’ again. That man is not to be trusted. He always drops off the radar when he is most needed.

There is romance in the air, which bodes well for the future. And it gets pretty exciting when Ziggy and Nessie have it out, and Mr McDougall realises he could maybe possibly perhaps have been wrong about the sheep-eater.

And as much fun as Josh’s story is, half the fun comes from Garry Parsons’ magical illustrations. Eddie and Ziggy are their illustrations. See those armbands?

Congratulations to Chris Riddell for winning the Costa children’s book award with Goth Girl and the Ghost of a Mouse. Both Ada and the poor little mouse deserve this. And so does my favourite political cartoonist author.

(I have to admit I suspected Chris would win when I saw that Josh Lacey had reviewed the book for the Guardian on Saturday.)

Winning such an award is no less than you would expect for a book that has ‘shiny purple sprayed edges … foil endpieces, … ribbon bookmark, … footnotes in the margin.’ It is not just a pretty book. It’s an intelligent one, as well. It is a book that makes for a good read whatever your age. And in times of need you can always stroke the sheer purpleness of it.

It would be very nice indeed if Chris could go on and win the ‘full Costa’ on 28th January. More power to children’s books!

I’m trying to work out how easy it really would be to write the kind of humour you get in a book like the third dragonsitter story by Josh Lacey. I read it and think, ‘I could do that.’ But I suspect that’s wrong. What I should be saying is ‘I wish I could write like that.’ Because I do. Wish.

Deceptively simple, is what it is. And funny. Even when you’ve read the first two dragonsitter books and know what to expect, it is fun. I’d like to be an eight-year-old boy, getting to read this kind of thing and realising what a wonderful world you find in books. (No, I wouldn’t actually. Never eight again. And probably not a boy, either.)

Loveable, if capricious, dragons are always nice. I like Ziggy. She’s a sensible girl. For a dragon.

And we finally find out about Edward’s dad. And Wales. And there are canapés.

It’s a nicely seasonal book, so save it for the Christmas holidays. Parties. Fireworks. You know.

(That picture of baby Arthur sleeping on a hot water bottle is so sweet! I think I might love Garry Parsons.)

‘The insurance man said he’d never heard that one before.’

Sorry for raising my voice the other week. Not too sorry, naturally, since it had the desired effect. I was just taken aback at discovering Josh Lacey had written more Dragonsitter books than the one I was reviewing.

So here I give you the original The Dragonsitter!

Reading backwards, as it were, means some things came as no surprise, but that’s OK. I like amusing little stories, although it was rather deadful that Uncle Morton’s dragon ate Edward’s sister’s rabbit Jemima. But like all (maybe I mean most, now that I think about it) young owners of pets, Emily (that’s the sister) is so enthralled by the dragon that she soon forgets…

There’s more frantic emailing when the dragon causes mayhem, but Uncle Morton doesn’t reply. The trouble with dragonsitting a troublesome dragon is that the RSPCA doesn’t believe you when you call to ask for help. Because dragons don’t exist.

Toasted postman, incredulous firemen, and barely escaping neighbourhood cats are all part of dragonsitting. And once you’ve spent a fortune on chocolate, you’re fine.

So is this book. Chocolatey fine.

Despite my non-pet leanings we once pet-sat a goldfish for some neighbours. The father (of the girl owner, not of the goldfish) indicated ‘discreetly’ that he would not be heartbroken if the goldfish snuffed it during their fortnight away. I had imagined a goldfish would be about as perfect for looking after as you could get. Enjoying that glowing feeling of doing someone a small service, while little fishy swam around in its bowl. Trouble is, that’s what it did. Swam. Opened and closed its little mouth, leaving me thinking it was desperately trying to tell me something, and failing. It was a relief to hand him (her?) back.

So I can totally see what it must have been like for little Edward Smith-Pickle minding his Uncle’s dragon, in Josh Lacey’s new book. He has to send email after email with bad tidings. The main problem being that Uncle Morton has gone to a retreat and is almost internet-less.

Yes, there is soon the pitter-patter of little dragon feet. And soon there is also the earthquake of visiting, cast-out dragon Dad.

Edward’s Mum bonds surprisingly well with her dragon counterpart. Old films and chocolates are always good, even when you’re sitting in your post-dragon visit wreck of a house.

OK, so I know this is a short book for young readers. But I loved it. Was slightly miffed to find out there had been another book before this one, which I HAVE MISSED.