You may have noticed I have been more grown-up lately. In the last few weeks I have both by chance and on purpose read more adult books. I set up Bookwitch mostly for children’s books, while also saying there would be some older crime.

Strangely enough, it has felt more relaxing reading some adult thrillers and stuff. I don’t know why, although it could be the same way I never fancy eating vegetables when I’m ill. Not saying children’s fiction is anything like greens. But you need different things at different times.

The other intention behind Bookwitch was to go on and on about children’s books.

‘Yes,’ I hear you say. ‘You already mentioned that, just now.’

It’s just, I never imagined I’d be reviewing brand new books all the time. It simply happened. I was fully intending to hark back to books I’d read some time ago; occasionally books that were really quite old and not in the news.

I like keeping up with the new (as you might have noticed when I moaned about my lack of Carnegie list success the other day), but there is no doubt about it; it’s hard keeping up. With Jules Verne or an older Celia Rees novel, there is less urgency. You just read, and then write a bit about them. Old Jules won’t even know I have his book in mind, so complete relaxation there.

I don’t know how I imagined I’d be able to feed you on my reading from the past, for 13 years. Even two years. Quite simply, I wasn’t thinking.

How to be Shakespeare

This is such a brilliant idea! Here I have two books from the British Library, by Deborah Patterson, on how to be your own William Shakespeare. Or J K Rowling or Tolkien. Or if you want to set the bar really high, Jules Verne or Arthur Ransome.

We’re actually back in the territory of writing in books, which is so tempting, but which could also lead to some less legit scribbling in all sorts of other books than these two. But my fingers are itching, just looking at the – inviting – pages in Deborah’s two My Book of Stories books. 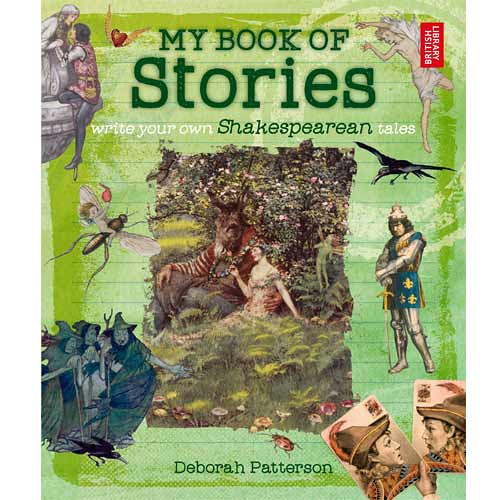 In ‘write your own Shakespearean tales,’ she introduces old Will’s plays, with quotes and pictures and All Those Lovely Designated Pages For Writing On! So read a bit about dear Hamlet and then see what you can do about beating Mr Shakespeare at his own game. 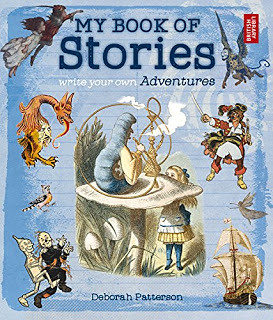 Likewise, in ‘write your own Adventures,’ we meet some of the classics in children’s literature; Alice, Peter Pan, Dorothy, Toad, Harry Potter, the Hobbit and all those others.

And then there are word games and that kind of thing, so really, you are in for a treat, playing and writing, all in one go.

Why am I so old? I was made for these books!

But Mummy read that!

With it being Roald Dahl day later this week, I was thinking about an article I read, which said that it’s mainly the parents who favour Dahl’s books now. Because they were the books they themselves read as children. (With me it was the other way round. I read Dahl to keep abreast of what Son and his peers liked.)

So what didn’t I force Offspring to read? Primarily the ‘real’ classics. The books that were pretty ancient even in my time, like The Three Musketeers and Ivanhoe, or Journey to the Centre of the Earth. I could almost forgive them for having no interest at all in those books.

But more ‘contemporary’ books like Pippi Longstocking were required reading. Or so I thought. Reading which we got round by watching the films and the television series. And then I discovered that Pippi was a bit of a bully, and nowhere near as funny as I remembered her to be.

Perhaps that’s how Roald Dahl’s books appear to children now? I can recall how appalled I was, seeing George’s Marvellous Medicine on stage. It really brought home the awfulness of those books. To this day I can’t bear Willy Wonka.

It won’t be long until a whole Harry Potter generation start to forcefeed their children wizards and witches and wands. Those readers are already beginning to pop up as authors (it’s probably quicker to write a book than to give birth to a new reader), having been inspired by Harry and Co.

If you don’t read Dahl now, you are very likely enjoying Jeff Kinney’s Wimpy Kid or Andy Stanton’s Mr Gum. How long until they are the parents’ choice? Thirty years, maybe.

I get the impression that Enid Blyton still works, even without any arm twisting. I expected Daughter to like the Nancy Drew books and bought two with lovely period covers, and they are still sitting on a shelf in pristine condition.

The thing is, Mother-of-witch never suggested books to me. I read all of hers. There weren’t many, and I didn’t own a lot myself, so anything that was available got attention. Hers were mainly what girls had in the 1930s, so neither terribly classic or incredibly modern. They were just books.

Perhaps if my childhood books had been in a language they could read, Offspring would have foraged and found something to enjoy.

The Eye of Neptune

With his Monster Odyssey The Eye of Neptune, Jon Mayhew has written a Jules Verne prequel. I wish I had thought of that, back in my most fervent Verne-reading years. Although I’m not sure I could have come up with the downright gruesome sea creatures that literally fill this book.

Prince Dakkar has been living with the mysterious Count Oginski for four years, learning ‘useful’ things for when it is time to return to his own country and take over as ruler. But when Oginski is kidnapped, Dakkar saves himself by escaping in the strange submersible that his mentor has built.

And from then on this is a rollicking adventure featuring the dreadful sea creatures and the pirates and other humans who live in and on the sea. Britain and America are at war, and Dakkar needs to avoid being caught as a spy when he ends up in America. That’s not a problem for long, as Dakkar gets more ‘caught up with’ the enormous and dangerous creatures that seem to have something to do with C.

C wants to rule the world. And he is mad. Or maybe not?

This is the perfect adventure for those readers who fancy themselves as someone who could save the world. Dakkar is the archetypical adventurer; brave, reckless, clever and exotic. You want to be him, or to be his friend.

I believe there’s more books coming, so it would seem the world has not been totally saved yet. Excellent news!