On the Front Line with Michael Grant

We were given permission to call him whatever we wanted. This man who recently lay down under a tank in the Ardennes, in case he would need to know what it looks like from down there. Michael Grant was back in Edinburgh on Saturday afternoon, converting a tentful of teenagers, some younger ones and a whole lot of older people who were unable to resist. (Although I have a few words to offer the adult who told her child companion to put Gone back on the shelf in the shop. That he wanted it was testament to Michael’s ability to make children want to read [his books].) 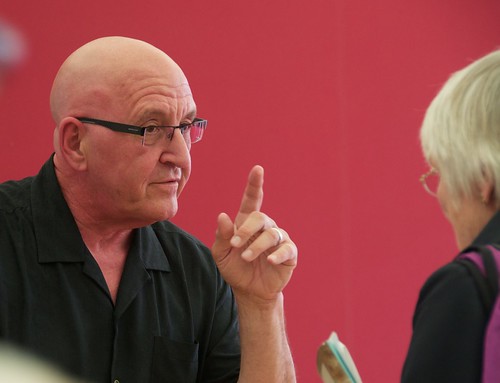 Michael threatened horrible pictures (I hope he didn’t have me in mind) and suggested some of us might want to leave there and then. It wasn’t so bad. Barbara Cartland was very pink, and I suspect Michael will never look like that, despite his past in romantic formula novels. Luckily he gave them up before he had to hang himself in the shower.

This is the man who left school after 10th grade because he arrived for school lunch through the exit door and was told to go out and come back in the right way. The one who surreptitiously gave the finger in an old family photo. Someone who has a past as a burglar of cheap diners. They got him in to inspire us, and he said he’d see what he could do.

Genghis Khan was worse than Hitler, and I almost believe him after hearing what happened in Kiev. And then there was the Chichijima incident, which gave us George Bush for President.

Anyway, Michael was here to talk about WWII and his latest book, Front Lines. He sought inspiration in books, and particularly praised Elizabeth Wein’s Code Name Verity, which he told everyone to read. He had done the Private Ryan Package at a rifle range, just so he could try lots of rifles out, despite hating guns.

He wasn’t sure how open he could be, either in the book, or with the audience, but feels that children can cope with the truth. And he only writes something if he thinks he will have fun with it. 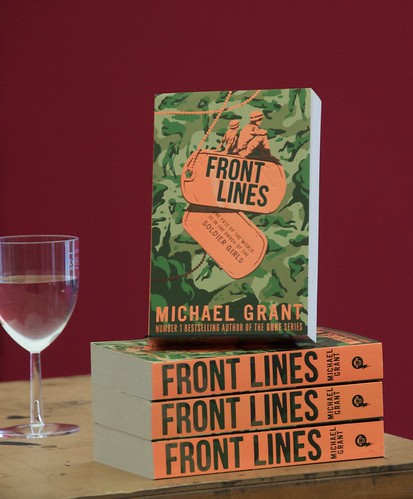 There were two things Michael changed in his book. One was giving women the draft, as he wanted to have them in the story. He also made black soldiers more integrated, earlier than in real life. The war had a good effect for black soldiers, because after fighting Hitler, they returned home less afraid than they’d been before.

This workaholic told us how he met his wife, Katherine Applegate, and how they eventually began writing books in order to quit their cleaning jobs. How they made a fortune with Animorphs (‘we’re going to need some aliens’) and then lived it all up, meaning they had to start again. 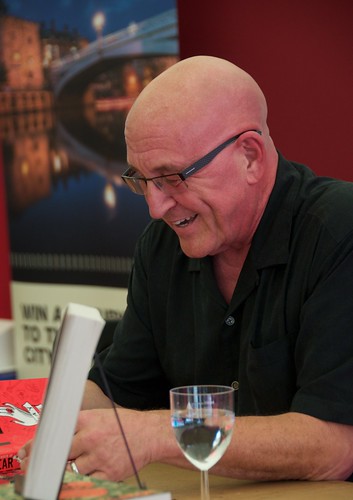 That’s when Michael had the idea for Gone, told his wife about it, and she told him to drop everything and write it. Being a well trained husband he always does what his wife tells him to do.

After Michael had worn out one microphone and moved on to the next, it was time for us to skip over to the bookshop to have our books signed. I must have lost my touch, because I was nowhere near the front of the queue. I blame the photographer who required the buying of her own copy of Front Lines (that’s how inspiring Michael was). And then I tried to convert the young boy who wanted to read Gone and wasn’t allowed… 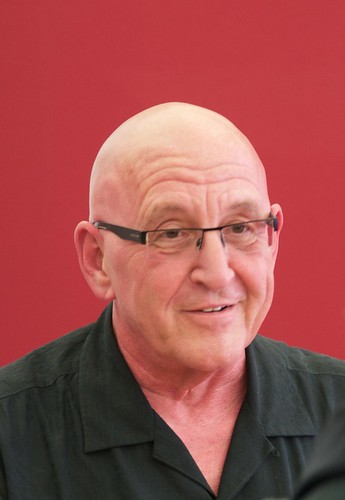 I have received complaints for messing up the last photo my photographer was going to take of a very happy looking Michael. I retorted that he doesn’t do happy, but actually, I see that he does. Even with other women readers. So here’s to a smiley Michael. It wouldn’t be Edinburgh without him.

Or Authors & Artists for Young Adults, volume 88, as published by Gale, Cengage Learning. It’s a reference book, and as the more astute of you have worked out, there have been 87 volumes before it, and I suspect (and hope) there will be many more after it as well.

No, I’ve not taken to reading and reviewing piles of reference material, but this came my way four months ago when someone wanted to use ‘my’ photos of Michael Grant. They were really my Photographer’s pictures, and after thinking about it she gave her consent and they chose the ones they liked best.

It took me a while to even work out the publishers were in the US, and once I’d established what kind of book they were producing, I asked if we could see the finished copy, which they generously said they’d send us. It’s not really the kind of book you’d go out and buy as a private individual. The edition is fairly limited and the price is high, so I’m guessing it’s mainly for libraries and similar.

But it’s such a good idea, collecting information on people who write for Young Adults, or illustrators. The selection process seems a little random, since it’s not alphabetical, nor chronological. There is an index listing who has been in all the 88 volumes, and in which one.

It’s not your ordinary list of YA people, either. Adèle Geras sits tantalisingly near Mel Gibson and Paul Gauguin. Staying with the Gs we have Michael Grant as well as El Greco and Graham Greene. There are disproportionately more Americans, but in volume 88 we have Matt Haig, and he and Knut Hamsun and Stephen Hawking are close, index-wise.

Jane Austen is there, and so is Mrs Michael Grant, K A Applegate. Walter Dean Myers gets a lot of room in volume 88, which he also shares with Anna Godbersen and Aprilynne Pike and Kenneth Oppel. As you can see, a varied lot of writers. ‘My’ volume has just over thirty names, and I’m guessing the older volumes are similar. Some names are listed more than once.

Michael gets six pages in this edition, and unlike some he doesn’t have either his address or his email listed. I suppose it’s up to each person how easy to find they want to be. Since this isn’t intended for the young readers, I imagine contact details are more for people who might want to book someone for events.

It’s a nice idea. You can – probably – never have too much information about what young people want to read.