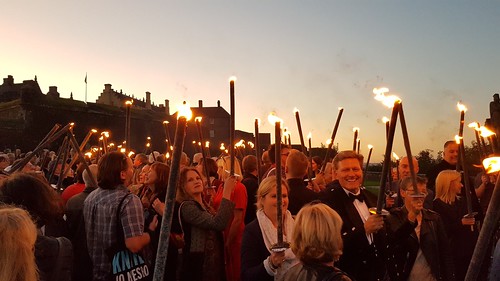 It’s obvious to me. Bigger population. More crime novels. And as Yrsa very sensibly put it, 300 000 Icelanders can’t possibly fill Waterstone’s with books. Although, I feel they are doing their very best. Once, the only writer from Iceland anyone knew was Laxness.

Yrsa is dark, or so Barry Forshaw who chaired the event said. I could see she’s dark. Having checked them out on google images to make sure I knew what they looked like, she has gone brunette from all those blonde photos. Maybe he meant her writing. Apparently Yrsa has also written children’s books. Cheerful, humourous ones at that. Good for her. And in true Icelandic spirit, where no one can be allowed to do just the one job (remember, there’s only 300 000 of them), Yrsa is also a civil engineer.

Barry Forshaw started off by asking them about their misanthropy, but they didn’t seem to get that. And then he called Stieg Larsson controversial, which also surprised the three of them. They all claimed to be very non-violent in their books, and Yrsa mentioned her difficulty in working out how to kill people off. Must be tricky.

But she has one piece of advice for those who do want to kill off their characters. The answer is the standalone novel, because those characters are disposable and need not be saved for the next book. How true. She herself has a new horror book coming next year. Presumably there isn’t a single character standing at the end.

Thomas Enger wrote four books before he had anything published. The fact that they were about a woman in New York might have had something to do with it. Once he wrote about what he knew – being a journalist – it went a lot better. He explained to us why his character is scarred, in more ways than one.

K O Dahl wrote his first novel at 15, and was so put out when it wasn’t published that he was never going to write again. But twenty years on, there he was, getting published, and doing so long before the Nordic crime wave. He said that at the time there was only him and Anne Holt.

They all avoid sex. Thomas’s character is too angry for sex, and K O prefers tension between his characters. As for Yrsa, Iceland is too small for sex. (You know, she is really quite amusing…) Having been informed that Italians and other south Europeans are the only ones who can write about food, Thomas makes a point of always having food in his books.

Speaking of food, Yrsa might have said she does the shopping for Arnaldur Indridason. Or perhaps not. The live near each other, but that’s just by coincidence. Early reading for K O was his father’s pulp fiction, whereas Thomas read the Hardy Boys and his sister read Nancy Drew. Quite normal, in other words. Didn’t quite catch what Yrsa said. Something about a Yellow Shadow, I believe.

Translations of books are tricky. They are only able to check the English ones, but that’s enough. Yrsa has been translated into 34 languages, and when she sees how mangled the English translation can be, she worries about what happens in the other 33.

After the Q & A, it was time for book signings, and Yrsa was kept singularly busy. I just wish she wouldn’t keep putting her reading glasses on and off like that. Made the photographer’s life difficult. The Norwegian ‘boys’ on either side of her sat like angels.