I have a certain bias, but I felt that the Translation studies research seminar at the University of Edinburgh yesterday afternoon was pretty good, and really interesting. Even for me, with some prior knowledge as well as interest in the subject of Nordic Noir. 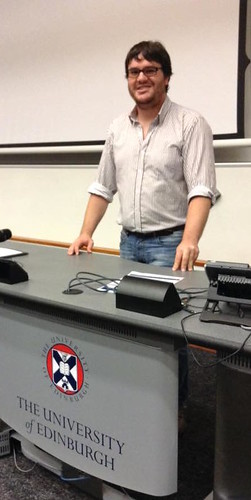 The talk by Ian Giles, aka as Son, was part of a series of seminars in the next few months, and it was merely a happy coincidence that they kicked off on what was International Translation Day.

The Resident IT Consultant and I both went. We were pleasantly surprised to find Helen Grant there too, but shouldn’t have been, as she’s both a linguist and proficient translator, when she’s not simply killing people. I introduced her to Peter Graves, making rather a hash of it. Translator Kari Dickson was also in the audience, as were other Scandinavian studies people and aspiring translators. And I was surrounded by a whole lot of Chinese whispers. Literally.

Nordic Noir didn’t begin with something on television five years ago. It’s been coming a long time, and Ian is on its trail, trying to determine where and when we first met ‘dark storylines and bleak urban settings.’ It’s more than Sarah Lund’s jumpers or Lisbeth Salander’s hacking skills.

The trail might begin (or do I mean end?) with Stieg Larsson and Henning Mankell, via Peter Høeg to Sjöwall and Wahlöö. But that list is not complete without mentioning the murder of Olof Palme or Kerstin Ekman’s Blackwater. And apparently some critic recently accused the new Martin Beck on television of imitating itself.

Here there was a slight sidetrack to a Turkish writer, translated twice in the last twelve years, long after his death, and only because his compatriot, Nobel prize winner Orhan Pamuk said he liked him. Knut Hamsun had something similar happen to him.

Because yes, the trail goes a long way back. Before Sjöwall and Wahlöö we had Maria Lang and Stieg Trenter, for instance. Earlier still, Hjalmar Söderberg’s Doktor Glas would have qualified, as would Norwegian Mauritz Hansen. And maybe even Carl Jonas Love Almqvist and Zacharias Topelius.

And when it comes to the crunch, Peter Høeg’s Miss Milla’s Feeling For Snow is not a true progenitor of Nordic Noir. It seems to be, but isn’t. People would have read the book no matter what. Hindsight tells us Peter Høeg doesn’t belong to the origin story.

Anyway, there are many more books translated into English than there used to be. The 3% of translated books has recently become more like 4 or even 5%. Swedish books come sixth if you look at language of origin, but make that Scandinavian books and they end up in third place, and if you count all the Nordic languages, they are the second most translated. 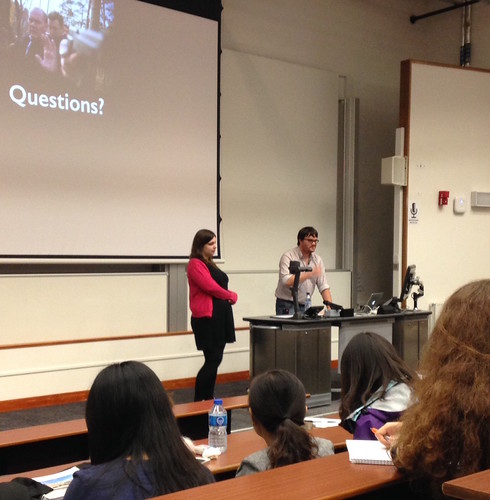 So, it’s not all jumpers, and Scotland has just claimed to have more words for snow than the cold Nordic countries. The latest idea for selling books on the international market is to translate the whole book into English, rather than a few sample chapters, making it possible to offer an almost finished product, as well as facilitating sales to countries where they don’t have a steady supply of translators from Scandinavian languages.

As I said, I found this interesting. And Ian’s a tolerable speaker, too. The right amount of jokes, and a good selection of slides and videos to show what he’s on about. The beard, however, was rather a surprise.

Remember Maria Parr? I read her Waffle Hearts a couple of weeks ago, and here she was, at the NRN conference, along with fellow Norwegian (well, half, anyway, and a quarter Dane and a quarter Swede, unless I misunderstood the maths) author Harald Rosenløw Eeg and Danish Merete Pryds Helle. They had come to talk about their writing, as well as take part in the discussion on reading translated children’s fiction. 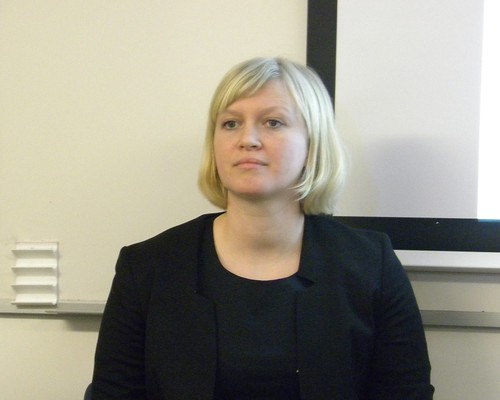 Maria read from Waffle Hearts (with her translator Guy Puzey right there in the room) in English, and then in Norwegian. I didn’t understand a word of the latter (well maybe a little, since I had actually read the book) as Maria’s accent is very hard to understand. 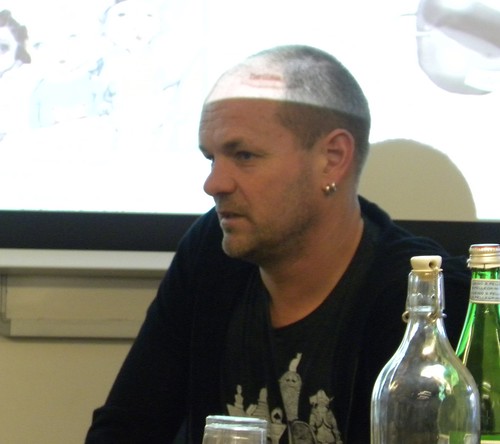 Nordic mix Harald came next, saying how Jostein Gaarder paved the way with Sophie’s Choice twenty years ago, showing that you can do anything you want. He didn’t feel he wrote YA, but simply wrote to please himself, in a Catcher in the Rye way. He’s grateful for the Norwegian state support to writers, which in effect means they get a sort of minimum wage. Harald read from his untranslated Leave of Absence, a novel inspired by a forgotten rucksack on the Oslo underground, which he’d finished just before the 22nd July 2011. His book felt too close to reality, so he changed a few things after the Oslo bombs. He said he speaks Nynorsk (New Norwegian) but writes in ‘Ordinary Norwegian.’

Merete went from ordinary adult fiction to what she calls digital fiction for children. She has tried a variety of techniques or media, and has settled on apps for iPads. She showed us one ‘book’ featuring children from all the Nordic countries, where the reader would start by choosing their language, and then the characters would meet and talk to each other, and you could learn to recognise different languages. 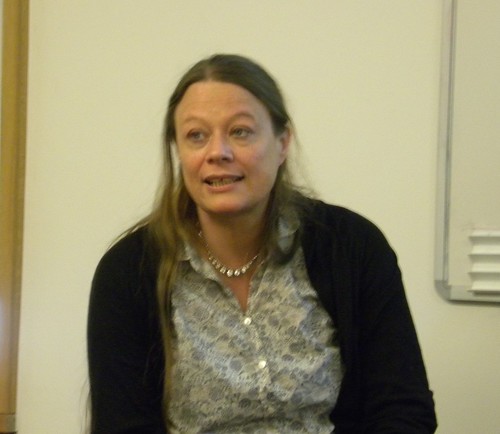 By asking an IT friend what you can do with iOS 8, Merete then wrote stories to fit the technical frames, which could mean (does mean) that the reader might need to shake their iPad violently in order to make the pine cones fall off the tree. Or you could light up the forest by showing your iPad something yellow. Very effective. She had a more traditional looking picture book, where the child can see themselves, and get to choose what happens next (like meeting pandas in China, or ending up on a pirate ship).

If you’d asked me beforehand, I’d have said this didn’t sound like anything that I’d be interested in. If you ask me now, I’d have to say it looked brilliant.

The discussion moved to films, and Maria said she was lucky with the Waffle Hearts film. Harald reckons you have to let others do their work, and that once there is a film, you will never get your characters back. Merete does choose the illustrators for her digital books, but not the voices. And her multiple choice advent calendar has four endings, but also two set days when the choices end up the same, to restore order.

As for language and dialects, that’s a big deal in Norway, while Merete reckons there are barely any regional accents in Danish. People use social accents more, and switch to mainstream Danish when it’s required. Maria is always asked if Nynorsk is important to her writing, which she thinks is strange, because it is simply what’s natural and normal. Harald’s children are better at English than the ‘other Norwegian.’ 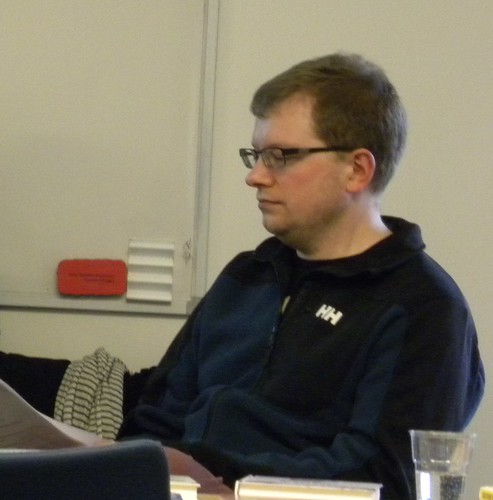 After a break for air – and more cake – we continued with the translation side of things, where the authors and Guy were joined by translator Kari Dickson, who volunteered that she has done ‘a lot of crime.’ 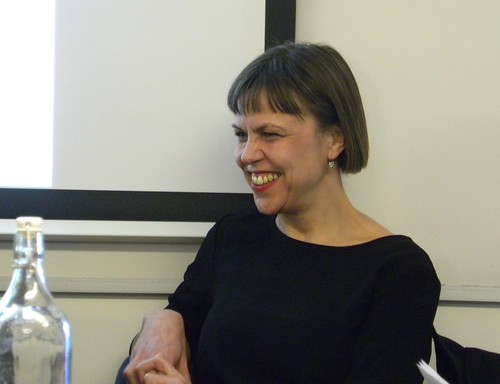 Too few books in the UK are translations. 2% here as opposed to maybe 30% in Europe. And as Daniel Hahn discovered when he counted books in a bookshop recently, children’s books fare even worse. Kari feels it’s important to read foreign books to help a better understanding of other people and countries.

We were asked about the first translated books that we were aware of reading as children. Astrid Lindgren came first for many, and both Harald and Maria loved Saltkråkan. Roald Dahl is big in Norway. Merete didn’t read Lindgren, but Laura Ingalls Wilder and Agatha Christie (at age 7-8), and Dickens, and she feels Danish children’s fiction is too harsh and doesn’t like it. Guy enjoyed Babar, and discovered Pippi Longstocking at university.

Others mentioned more Lindgren, Paddington, Jules Verne and Alexandre Dumas. There was the young Swede whose mother made her her read books about Africa and Vietnam, with not a single Donald Duck anywhere…

And then the peripheries where we live re-appeared in the debate, except for Merete who pointed out that Denmark is the centre of the world, and how her characters dig all the way to China.

Translating picture books is like writing the book from scratch a second time, because the translator has to work out how to make the original shift into another language. Harald’s opinion was that the translator might as well write their own stuff, as he won’t be able to read it anyway.

Squeaking wet snow is a problem. A lot of Nordic fiction describes things that the receiving language and country might not have. London is well known to most, but what the hamlet in Waffle Hearts looked like will be almost unknown, even to people in Oslo.

The session ended with the Norwegian authors saying we need real books to relax with on long journeys, and Merete disagreeing and saying how she would have loved an iPad as a child.

So, we’re all different, but we would benefit from reading each other’s fiction, travelling in our minds, making us feel calmer.

The translators are on the warpath. Or, at least making themselves noticed. I understand that super-translator Daniel Hahn has written something really good on the subject. It’s just that I haven’t been able to read it. Not because it hasn’t been translated, but because it’s in a publication called The Author, and some of us don’t subscribe to it.

After Hari Kunzru ‘forgot’ to mention – in The Guardian – the man who had assisted his reading of Karl Ove Knausgaard’s books, there wasn’t one, but two, letters about it in last Saturday’s paper. And quite rightly.

Don Bartlett is the translator in question, and you feel that it would have been worth including his name in some dark corner of the article, even if it was mainly about Knausgaard. It would have been polite. Or maybe Hari reads Norwegian?

One of the letters, from Don’s colleague Kari Dickson appeared in The Review, while the other letter made it onto the letters page in the main section. It’s not bad managing two separate comments on one article.

Many readers probably still believe translating means taking one word at a time. You pick the ‘same’ word in the other language and write it down. Then you move on to the next word, and the next, and so on, until you’re at the end of the book. Or the mining report. Or the tourist brochure. Or even the death certficate. And there is only ever one way something can be translated.

(That last paragraph contains some sarcasm. In case you were about to believe me.)