Small in the City

He is so small. Well, I suppose the title gives that away; Small in the City, the Kate Greenaway Medal-winning picture book by Sydney Smith.

The illustrations are gorgeous, snowy, cold, mysterious. We see a small person travelling through the city, in the snow, but we’re not quite sure why. The words are encouraging someone, maybe the boy himself, maybe someone else. Someone he’s looking for, telling them not to be scared.

It’s – probably – a North American city, and the snow definitely feels like something you ‘only’ get on the other side of the Atlantic. And the boy is dressed up warmly against the cold. You can barely see him. He looks so small.

This would be good to read with a child. You could discuss what or who the boy is looking for, and why. There is a lot going on in the pictures, although it quietens down towards the end.

This year’s Carnegie Medal has gone to Jason Reynolds; someone I only heard about four years ago, from a fervent admirer. I have since seen Jason at an event, and I reckon he’s OK. His winning book, Look Both Ways, sounds interesting, so I know what I have to do…

The Kate Greenaway Medal winner is Canadian Sydney Smith with Small in the City, where one ‘small’ illustration has me in raptures, and I definitely know what I have to do.

And I could be wrong, not having read either book, but they seem to have something in common. Besides medals, I mean.

And the Carnegie Medal shortlisted books:

There are eight in each category, so it will still be a difficult choice to make. I’ve only read one, but can already tell that I would have wanted to have read many more than that.

This is the Carnegie one: 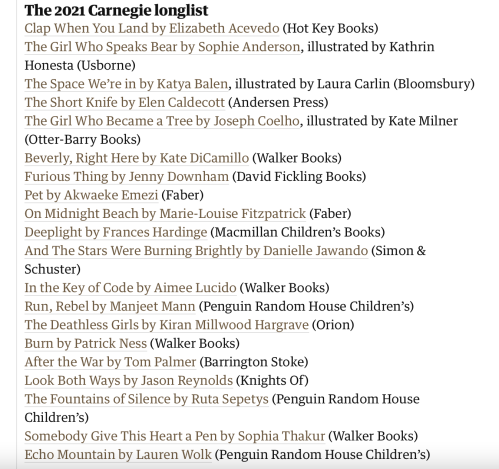 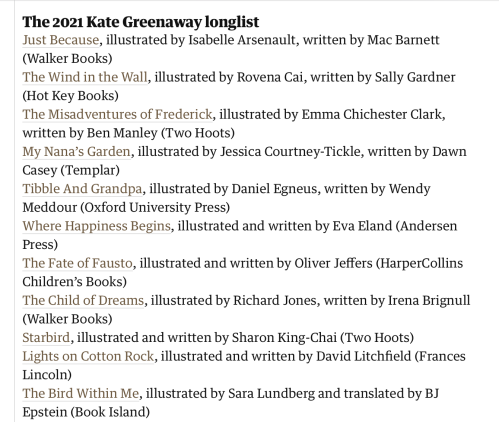 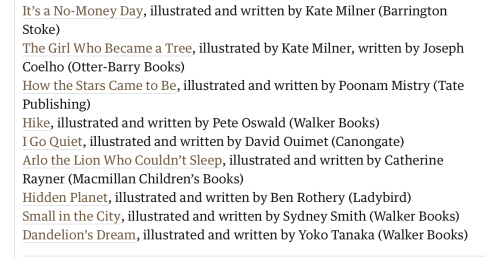 I’m pleased with both. I believe I have only read four and a half of them, but I am still pleased. I’ll leave them here for four weeks and then we’ll have a peep at the shortlists.

The trip to Spain might have been fake – fake Spain with rain, not so much fake trip – but this week Kirkland Ciccone went to Sweden. Only in cyberspace, but it’s hard to travel these days, so it will have to do. I’ve been itching to have a photo published on Boktugg, and when Kirkie ended up on my television screen last Thursday, I decided to send in my picture of the occasion, and they’ve printed not only the photo, but my words about him, including the murderous porridge.

I must think before I press send…

This week gave us the long nominations lists for the Carnegie and Kate Greenaway Medals for 2021, and as always, they are good lists. They give pleasure and hope to those on them, and I feel considerable guilt for having read only a few. But those few were Very Good. I’m sure they will make the longlists and maybe the shortlists too. Even if only one – in each category – can win.

Somewhere you can win a bit more easily is when it comes to pay. Equal pay. I had kept a link to something from absolutely ages ago, but ended up never getting to it to comment, so deleted it. Now in The Bokseller I see that the gender pay gap at PRH – Penguin Random House – has widened. That’s what I would call going in the wrong direction. If you really, really want to improve pay equality, you do. More money to the women, and not necessarily less to the men, but not increasing their salaries disproportionately. Pay is something you can determine in an office. No need to wait for pandemics to end or for politicians to grow sensible.

And the same goes for reviews of children’s books. Last year The Bookseller reports only 4.9% of book reviews were for children’s books, and a year later this had managed to slide down to 4.3%. 50% is too much to hope for, I suppose, but maybe a little more than barely 5%? I forget who said this in the last few days, but children’s books matter more, because they shape their readers into the kind of people they will grow up to be. I do my best, but as you well know, that is not a lot, and my viral reading has plummeted.

My local newspaper has launched this year’s charitable collection for Christmas presents for children who might not get any. I am gearing up to give them books again. Especially with the above in mind, but also with that in mind, I fear that plastic toys in primary colours will be more welcome. At least by the adults sorting the gifts. Except I know there are children who don’t actually own any books, and who would be happy to be given one.

And finally, thirty years on, we are looking at the last book by Jacqueline Wilson to be illustrated by Nick Sharratt. Not that we have been wanting this to end, but as they say, the time has come for Nick to concentrate on his own work. Here at Bookwitch Towers we will be forever grateful for the way he has captured Jacqueline’s characters and made so many children want to read her books. I have on occasion wanted to simply sit there and stroke the gorgeous covers, especially that pink one over fifteen years ago. And who can beat Tracy Beaker?

Medals for ‘my’ boys

It’s good to know the witch senses are working just fine. I could simply not see any other outcome regarding the Carnegie Medal than that Anthony McGowan would be awarded it for Lark. It could have happened sooner, but this way we got all four books of the trilogy in.

(And I’m saying this even keeping in mind the competition Tony was up against.)

For the Kate Greenaway medal it was Shaun Tan for his Tales From the Inner City (which I’ve yet to read). One of my most favourite illustrators, and I’m more than satisfied. 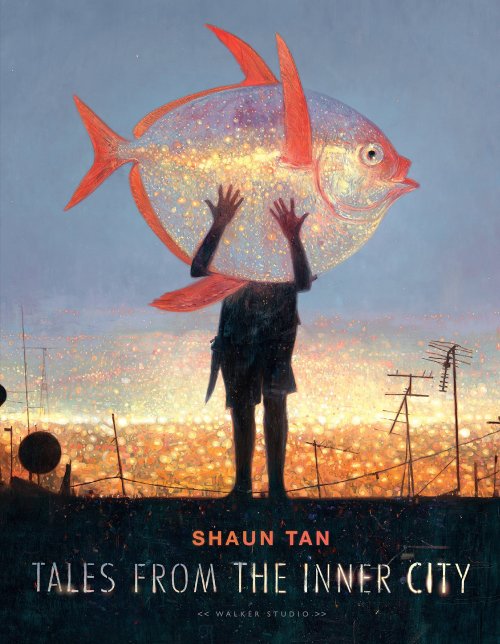 This year the proceedings were short and on Radio 4, on Front Row. They interviewed both Tony and Shaun and both read from their books, and explained the background to what they’d written. Tony got so excited he had to be interrupted in the middle of his ‘terrific’ answer…

According to Shaun ‘painting is really a way of exploring anxiety’. Plenty of that around.

Yep, very satisfied with this.

Well, I have read four of the books on the Carnegie Medal longlist for 2020. They were all excellent. As I’m sure the others on there are as well. Just wish I’d had the opportunity to read a few more. (I know. I could have kept myself properly informed and gone out and got them.) 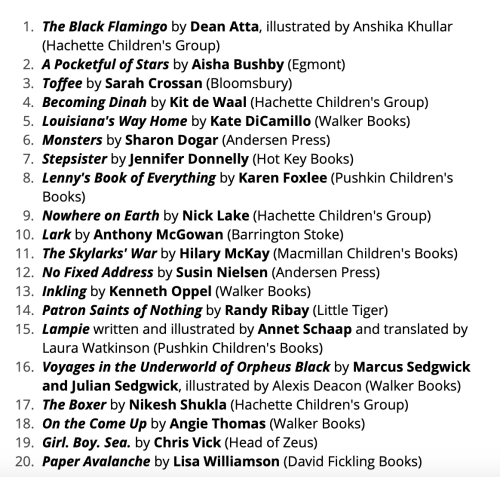 The list for the 2020 Kate Greenaway Medal is far worse, when it comes to me. Not a single book. But presumably twenty really good ones, nevertheless. 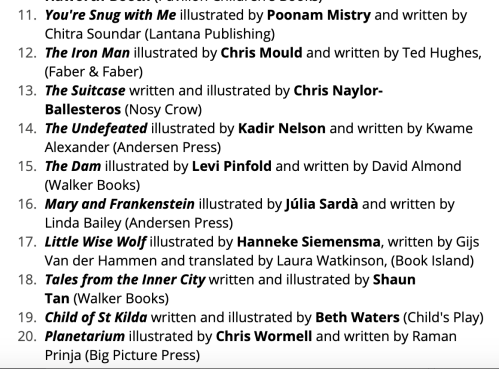 The 2019 Carnegie and Greenaway medalists 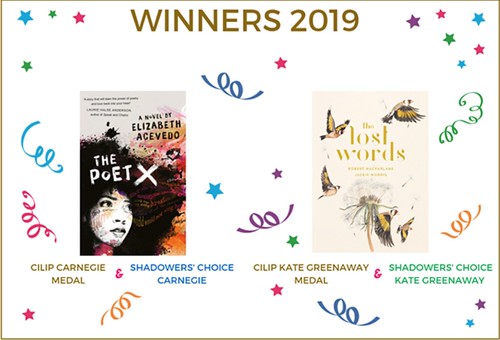 Congratulations to Elizabeth Acevedo and Jackie Morris for their new medals! Much deserved. 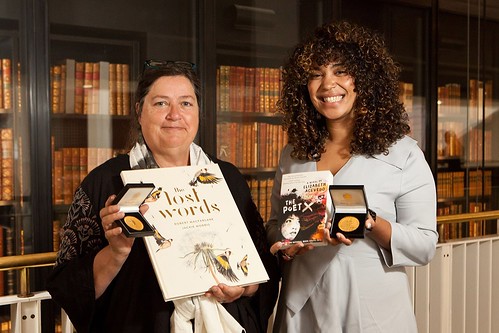 Books for teens? Not as popular as they were?

It’s tough for YA authors, and as is pointed out in this Guardian article, they are giving up. It’s no longer enough to have a burning ambition and plenty of ideas. You need to eat and pay the rent, too. With publishers not so active at promoting the books they publish, they sell less well. Not surprising. I practically have to drag both information and books out of their hands.

Kirkland Ciccone isn’t giving up, however. Next month he is back with another YA day in Cumbernauld. He’s lined up six – or seven – authors (it’s hard to know where you are with Philip Caveney and Danny Weston) to come and entertain students from local schools for a day. Yay! YA+

Last night I’d half hoped to attend Noir at the Bar in Edinburgh, had it not been for last minute builder issues. I’ve so far missed every one of these evenings, but am sure one day, evening, I will be there. I had been under the impression it was all noir [crime], but having had coffee with Moira McPartlin the same morning, and learned that she was there to be noir about her Star of Hope where there is a lot of death – cannibals, even? – she reckoned that you could noir pretty much about anything. (And she’s going to be in Cumbernauld for Yay! YA+…)

More good YA news for John Young, who has just won the Scottish Teenage Book Prize for Farewell Tour of a Terminal Optimist. Very good book.

The Carnegie/Kate Greenaway medal has only got as far as its longlist, but that’s good enough for me. I like seeing how right I was from the nominations, and also to see how many I’ve read. This year, more than expected. And I can’t name one I prefer, which is probably as it should be.

Yesterday’s top ‘news’ was the date for Philip Pullman’s second Book of Dust, The Secret Commonwealth, which will be with us in just over seven months! Put October 3rd in your diaries.

While you wait, buy a few YA novels to keep those authors going.

To begin with I suspected it would turn out that I hadn’t read very many of the books on the Carnegie medal nominations list. I am more than aware of how unaware I am these days, not keeping up with developments, and not being kept up on them either.

But from the rather long list of highly thought of books, I’ve read quite a few. 21 to be precise. No, I see it’s 22. Sorry. I have several more on the top layer of my tbr pile. I don’t feel shamed by my ignorance, even if I’d quite like to have got into closer contact with many more nominated novels.

Timing is odd, though. Some of the books feel very recent, while some feel actually surprisingly old. I’m sure it’s still the case that they all fall into a 12-month period, but I tend to think ‘Oh, is that still considered recent?’ and ‘Hmm, that got on the list pretty fast.’ But that will just be me.

And I apologise for my silence on the Kate Greenaway nominations. There is a link on the page, but it doesn’t work. And as happens every year, my Googling techniques seem to get me nowhere.

It’ll be interesting to see who makes it to the longlist. I have several books that I would like to win. I suppose that will turn out to be impossible.