Another thing I discovered at the library (see yesterday), was their section of beginners’ fiction in English.

Well, that’s what they called it. I noticed the thin books in English by, among others, Bali Rai and Kevin Brooks on the shelves on the end of one of the sections.

I didn’t recognise these books, so went closer, and realised that they were older Barrington Stoke titles. And yes, as such they are easier to read. Shorter and in a simpler language, and thereby ideal for the novice reader of English. We should have had books like that when I was at school! We got Somerset Maugham instead.

Have no idea how popular they will be, now that impatient young readers tackle Harry Potter in the original, because they can’t wait. And I get the impression that having started, many young teens go on to read a lot more in English, because they’ve realised it’s possible. That they can.

But for those who can’t, these dyslexia friendly books are just the thing.

Yes, there were good books, even in a year like 2016. Let’s not lose [all] hope, shall we? In fact, after careful consideration, there were more serious contenders than I could allow through to the final round. Sorry about that.

During 2016 I seem to have read and reviewed 154 books. Before you gasp with admiration, I should mention that 40 of those were picture books. 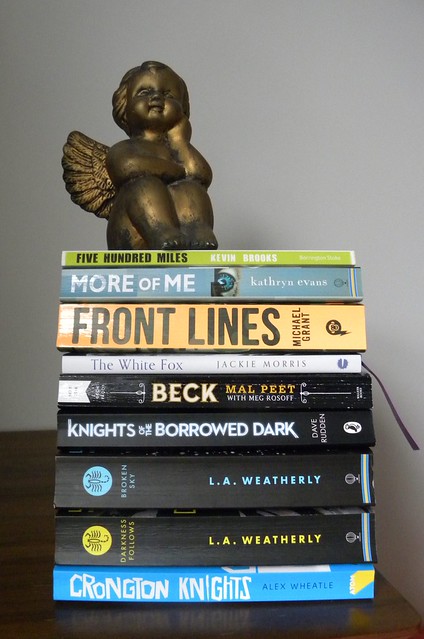 And here, without me even peeping at other best of lists, are my favourites, in alphabetical order:

Knights of the Borrowed Dark, by Dave Rudden

More of Me, by Kathryn Evans

The White Fox, by Jackie Morris

I believe it’s a good list, and I’m glad that two of the books are dyslexia friendly; one at either end of the age spectrum.

And, you are human after all, so you want to know who just missed this list. I’m human enough to want to mention them. They were Hilary McKay, J K Rowling, Malcolm McNeill, G R Gemin, Jonathan Stroud, Kate DiCamillo and Philip Caveney.

Two dozen more on my longlist, and we mustn’t forget; if a book has been reviewed on Bookwitch at all, it has passed quite a few quality tests. So there. You’re all winners. But some are more winners than others.

Five Hundred Miles is just wow! Kevin Brooks has done it again, and Anthony McGowan needs to look out. Generally I find the harsh settings of Kevin’s books quite hard to cope with, as I do the bleakness in his books. This one is no more cheerful, except the title tells you there might be something to look forward to. 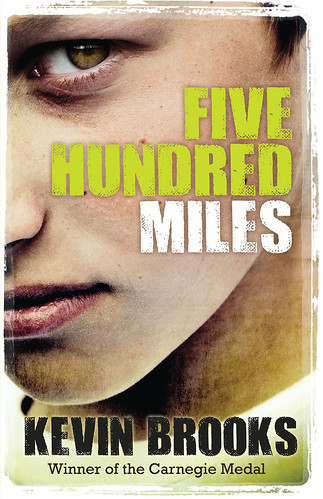 Cole and Ruben are the sons of a feared criminal, and live in a breaker’s yard in East London. You feel they are good boys, even though it becomes quite clear they are capable of both theft and violence.

When they unexpectedly come across a teenage girl who’s wanting to rescue a monkey from some gangster types in a pub, it’s not only the fact that she looks like their dead sister that makes them jump in to help.

I ought to dislike everything these boys stand for and what they do, but the way Kevin writes about them you just want to love them and be their friend. This is the kind of book I want to put into the hands of dyslexic teenagers everywhere, as well as capable readers. No one could help but love this book!

I mentioned Kevin Brooks and his new book with Barrington Stoke some months ago. It’s great that they invite and are accepted by all these good, mainstream authors. Luckily it seems that both sides consider it an honour to be working with the other. That’s the best way. 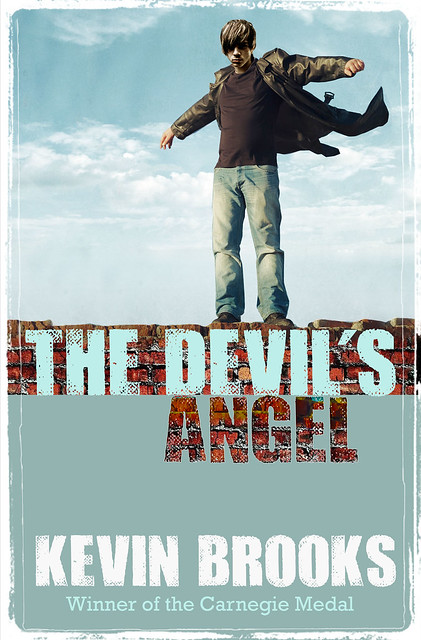 The Devil’s Angel is as scarily bleak as Kevin’s other writing leads you to expect. To be perfectly honest, it is not my kind of thing. At all. I prefer a rosier outlook on life, but recognise that this will appeal to countless teenagers, and I can’t see why dyslexics should be any different in that respect.

This is good stuff if you want edgy fiction. As described on the cover, The Devil’s Angel is about Dean, who ‘just walked into the classroom. Sat down. Smiled. Then beat another kid to a pulp.’

Dean befriends the fairly average John and they have an unusual and unforgettable summer, doing the kinds of things we parents would prefer teenagers not to do.

You know books? There is money in them. Sometimes, at least, and not only for author and publisher, although I’d wager Michael Morpurgo has made a reasonable sum from War Horse the book. Possibly more from the play and the film. 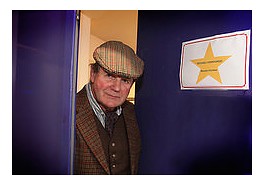 War Horse the play has just finished its second run at the Lowry, hopefully pleasing the 200,000 people who came to see it. But what’s more, it hasn’t merely earned money for Michael or the theatre. It has been estimated that Greater Manchester is better off by £15 million. And it’s pretty good that books can have such an effect.

Not a farmer, nor a twinkly old elf, is how Neil Gaiman doesn’t describe his friend Terry Pratchett in the Guardian this week. Terry is driven by rage, Neil claims, and I can sort of see where he’s coming from with that. I reckon Terry got pretty annoyed to hear me say that my local library service banned him from the under 16s. (Correction, it was their representative who did. Not the whole service. But still.) And any person with any decency would be furious about what’s wrong in this world. And luckily we have the non-twinkly Terry to write wonderful books about it.

Someone who scares me much more is Kevin Brooks. I know. He seems non-scary, but his books deal with people in circumstances I find hard to cope with. Kevin has just written a book for Barrington Stoke, to be published in January 2015, and it might be short, and it might be an easy read. But it’s also not an easy read, in that it deals with the hard reality for young, male, teenagers. A typical Brooks, in other words.

Daniel has also worked hard on the new Oxford Companion to Children’s Literature, to be published in March 2015. I’m looking forward to that, and hopefully this new companion will pave the way for a few more readers, too.

Whereas authors playing football will achieve exactly what? OK, let’s not be negative or anti-sports here. I did actually want to go and see the football match between English crime writers and their Scottish counterparts. It was part of Bloody Scotland last weekend, but unfortunately the match clashed with an event, and being lazy, I chose to sit down in-doors instead of standing on the side of a rectangle of grass watching grown men kick a ball around. 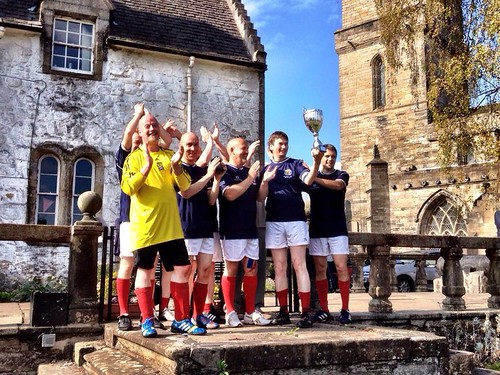 I understand the Scottish team won. Ian Rankin is looking triumphant, and I can see Craig Robertson, Christopher Brookmyre and Michael J Malone, plus some more people I don’t recognise in shorts.

When Kevin Brooks won the Carnegie Medal this week, war broke out over how dark you can have your children’s books. Kevin’s The Bunker Diary is apparently very dark indeed (and I think that’s why I chose not to read it), and some people love it and others don’t, at all.

I seem to be in agreement with Amanda Craig in The Independent, who prefers her Carnegie winners to be for younger readers, and she wants the books to have hope. Not necessarily a happy ending, but there needs to be some reward for all that gloom. But then there are many who actively like dismal realism, and say that children can take it.

I agree with the last statement. Children don’t need protecting from gritty and realistic literature. Whatever they encounter in their own lives, they will welcome in fiction. You want to read about people like yourself. But I suspect that a little bit of something positive would be welcome. Not an unrealistic sugary ending, but something. Something you could add to your own life, even when you have no power.

But we are all different, which is why Kevin was awarded the Carnegie Medal, and why so many feel it was the right thing. I’m happy for him (although if this was fiction, I suppose for Kevin never to win would be suitably dark realism) and I’m convinced it’s an excellent book. Just not a happy one.

I’m a little surprised at Amanda’s outspokenness, but as one of our leading critics she can get away with it. The press have been more than keen this week for articles on the subject. I believe there is more coming. It’s good that children’s literature can stir up feelings.

Two things happened almost at once. I received a bundle of books from Barrington Stoke. And Nicola Morgan pointed out that she was going to have a bit of a dyslexia day today. It seemed as if it was meant.

These books are great! I can’t praise them highly enough! I just hope they will find their way to someone who needs them. That is always the problem, isn’t it? You might not know what your problem is, nor what can be done about it. And then there are people who know and can help. The two just need to meet.

Many parents have had a dyslexia moment. I know I have. You look at your child and think, ‘could he/she be dyslexic?’ And you’re not quite sure how to find out.

As Nicola tells us here, she has a long connection with dyslexia, and has done a lot of good and useful things to help dyslexic children and their parents. But she ran out of time, and had to give most of it up. She wouldn’t have returned to it either, had it not been for Jackie Stewart, whom she sat next to at a dinner recently. (I am very jealous.)

Today she has another blog post about dyslexia, and she will spend the day tweeting about it, and wants the rest of us to help by retweeting. Nicola will point people to an online assessment toolkit, developed by Dyslexia Scotland, but free for all to use. So tell a teacher about it, and hopefully they can help a child.

And then there are those books I mentioned. Barrington Stoke have reissued some older books in a new style, which is even more user friendly (can you say that about fiction?). There are useful, but almost invisible numbers on the back, telling adults what reading age and what interest age they are intended for. All very discreet. And the dyslexia sticker on the cover peels off, leaving no embarrassing clues.

A couple of the books I have here are for younger readers, which you might expect from Michael Morpurgo and Malorie Blackman. Easy to read younger books are less ‘unlikely’ though. What I’m really impressed with are the older books, where the plots are pretty advanced and not in the slightest childish. They are simply easy to read novels for almost anyone.

There are books by Kevin Brooks and Nigel Hinton, and they definitely look the business. They are books set on the rougher side of life, and apart from their length and layout, they look just like ‘normal’ books. Because they are. Another couple of books I already had are by Chris Wooding and Sam Enthoven, and I’m not sure that I’m not too scared for these kinds of topics.

I mean, how do you fancy a mobile phone that is evil and that you can’t escape from? It might almost make you wish you couldn’t read after all… No, I don’t believe it would. Readers will love these books!