After much speculation – well, in my circles, at least – as to who will be the next children’s laureate, we have the answer. It’s Cressida Cowell, who writes so well about dragons. Lots of young people read and like her books. What more could we want? 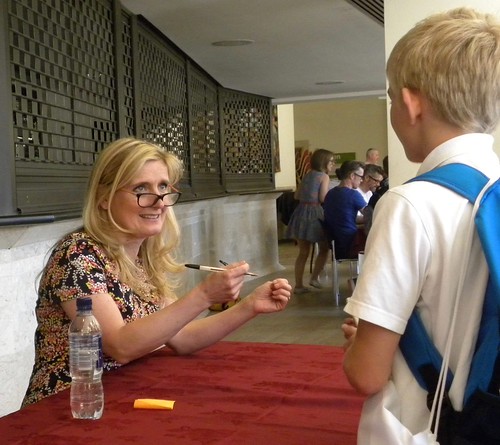 For me it will be very practical as well, as I frequently look at a picture of Cressida and think ‘that’s Lauren Child,’ or the other way round. So now that she takes over from Lauren, they will be more closely linked than ever.

And it seems Cressida really is married to Simon Cowell. Only not that Simon Cowell. (When I saw the question online I thought what a silly question, but it seems it was me who was silly.)

Congratulations to Cressida, and may her reign be enjoyable and I hope she will be able to do what she hopes to achieve in her two years.

Scottish and Friendly with Lauren Child

‘Hello,’ they say. Not ‘do you want to sign in,’ as they do in English schools. That’s what so friendly about Scotland, like this week’s Scottish Friendly tour, where Scottish Book Trust are driving Children’s Laureate Lauren Child (see how those words and her name sort of go together?) all over Central-ish Scotland. Same procedure as every tour; five days, one school in the morning and one in the afternoon. Apparently it can be hard to remember whether you just said what you just said, or if that was in the last place. 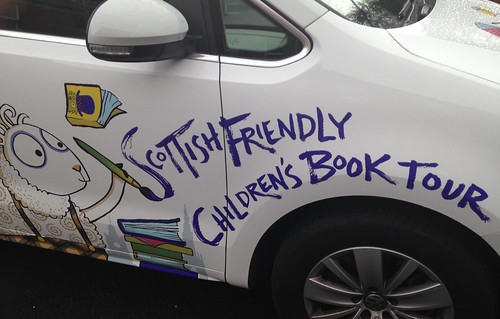 Not since they brought me the last Laureate – Chris Riddell – have I been so pleased that I didn’t have to travel anywhere to meet Lauren Child, but they brought her to me. This time there was no need to break into any schools, even if they did have our local primary school on the itinerary, as I managed to insinuate myself to join them for ‘the daily pizza.’

Except it wasn’t pizza this time. And the Burgh Coffee House was full, even with Scottish Book Trust’s Tom & Co looking pointedly at the table-hoggers there, so they repaired to the new place across the street, where I joined them, having a latte as they worked their way through avocado toast with whipped cream. Ah, no, it was actually poached eggs. Looked like cream. And Lauren Child took to having a random witch join her like the professional she is.

We started by agreeing how strange it was that after all these years, we’d never been in the same place at the same time before. A witch should always aspire to someone new. Her Charlie and Lola books, and subsequent television series, were too late for Offspring [and me]. I had perused Lauren’s website before the meeting and discovered that I am not the only one to believe she’s American.

She’s not. I deduced from her description of a very long radio interview she’d done with someone once, that she might be from Wiltshire. Apparently it matters where you come from, as it does which part of London you live in now.

I’d been hoping to ask a really good question, but Lauren beat me to it and asked one of me instead… ‘Who do you still hope to meet?’ My answer should have been, ‘after you, no one.’ But I wasn’t that alert at that moment. 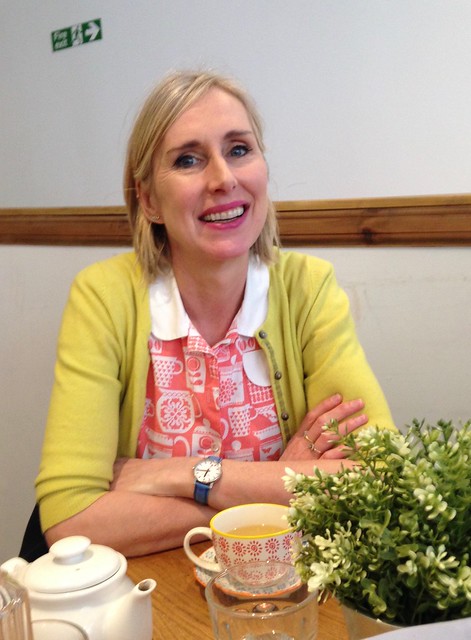 Lauren has done what she wanted to do as Children’s Laureate, which is great. She’s at ‘the end’ now, and reckons she managed her goal by not setting such a crazy pace as her predecessor did. In fact, Lauren said it’d be better if the Laureate could stay on for longer than the two years, making it easier to have bigger goals, and for them to be successful.

She can also think of who might be good to take over after her, but is far too discreet to mention names. Although, she did say she feels it would be better not to choose the really big names, as someone slightly less famous could have more time to do the work.

I asked if it helps being known from television when she goes into schools, and it does. Sometimes children can take time to decide that an author is worth listening to, so if they already know about them, that helps.

Lauren’s entourage this week consists of three helpers, making her look terribly important. Scottish Book Trust’s Tom had managed to get two assistants to carry the books for him, which is good going for someone who drank Choconana two and a half years ago. Yesterday he had what looked suspiciously like some kind of coffee. And the café gave them two free slices of chocolate and beetroot cake. Because it was Wednesday.

As always, I stayed for far longer than I should have. (I blame the nice company.) And I turned down their kind offer to smuggle me into that afternoon’s primary school. It was good to have met Lauren, after so much time. And she looked lovely, dressed for spring, and far too sensible in a London and Wiltshire kind of way to even contemplate milkshakes. I’d say some sort of green tea?

We have a new Children’s Laureate. It’s the very popular Lauren Child – another illustrator – whose name I am childishly happy to realise is sort of similar to her new title; child and laure. 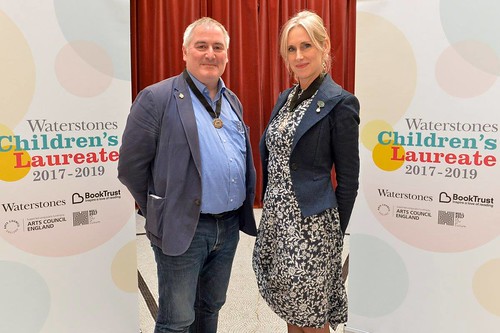 When I spoke to Chris last year I wasn’t surprised to find that he was looking forward to the end of his two years, when he’d be able to maybe rest a little, and to concentrate on his own work. Though I am sure he will also miss the whole thing a bit.

Chris is a hard act to follow, so I’ll be interested to see what Lauren will do. (Rather her than me!) I never totally grasped Lauren’s greatness, with Offspring just too old for her oh so popular books. But listening to those who know better, she is big.

And hopefully full of energy. She’ll need it.

Another accolade to the illustrating world was Scottish Book Trust’s Outstanding Achievement Award given to Mairi Hedderwick last week. As with the laureate-ship I couldn’t quite come up with my own theoretical shortlist, but on finding out that Mairi was the inaugural winner, I felt it all made sense. Who else but Katie Morag’s mum? 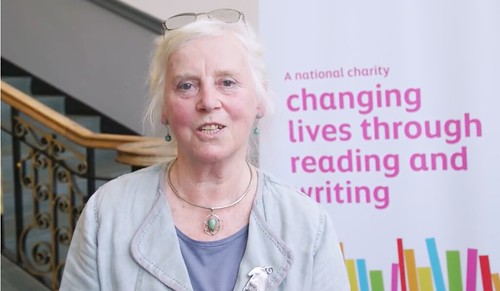 Isn’t it interesting that all three people in this post are illustrators? Authors as well, but rather better at drawing pictures than most of us.

London did what it does best on Monday night. It offered one of those balmy evenings, when it’s a pleasure to stroll along the South Bank, with the lights and the sights. The witch household had shivered under blankets as she left, but it’s a well known fact that it’s warmer in the south.

The people at Puffin felt compelled to express their love for the witch and a few others behind their successful publishing business, by throwing a party. The noise level at the Tate Modern rose a little too much, so most of my chatting happened early. And do you have any idea of how fast Nicholas Tucker can walk in a party crowd? He, and some other prey, will simply have to be caught some other time, when I will avail myself of a broomstick.

My technique for sidling up to people and start a conversation with the opening line that I haven’t yet read their book/s, needs some improvement. Worse still, was having to admit that I’d not got further on one book than I had at our last meeting, five months ago. Bad witch. Could always talk about the weather, I suppose.

If I name drop now, I’ll forget someone, or it could be that I just didn’t see or recognise some people. Kevin Brooks was there. So were Linda Chapman, Lauren Child, Linzi Glass, Charlie Higson, Graham Marks, Meg Rosoff and Ed Vere. And absolutely loads of the lovely Puffin ladies, some who weren’t ladies, and many others who do things that have to do with books.

And an EastEnder. I’m the kind of person who knows so little about soaps, that I was able to have a Coronation Street neighbour without knowing it. But I think Ross Kemp is in soaps. Which reminds me of the time I wanted to buy soap and googled Mitchell’s wool fat soap, and got EastEnders instead. Television! Bah!