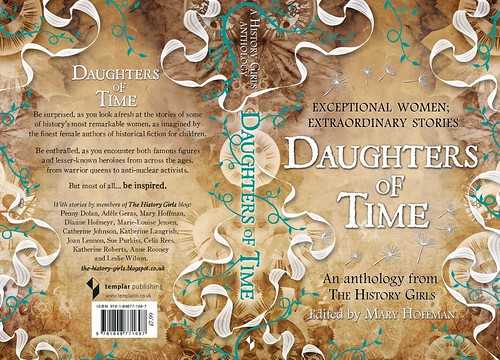 This is a beautiful collection of short stories featuring WWI. Edited by Tony Bradman, some of our bestest children’s authors have come up with their own interpretation of the war. It’s interesting how writers can find such diverse starting points for a story on one and the same topic. Many of them have based their story on memories of grandparents or other relatives who fought in the war, or who were among those left behind, or who had to live with the fall-out of what happened to family members.

I can’t pick a favourite. They are all special in one way or another.

As I always say about anthologies; they are the perfect way of enjoying many writers in small doses, and this collection proves again that the short story is a wonderful, handy size of fiction.

Some of the contributors have written stories about soldiers from other countries, thus highlighting the world aspect of the war. Germans are/were human beings like all the rest. They didn’t eat babies. Young men from Australia and New Zealand came to Europe to fight. And so did Indians who sometimes had no idea of what was going on, and the Irish who had issues at home, while fighting for a country that was also the enemy.

If you like war stories, this is for you.

How I wish I could have popped over to Dublin last week. It was positively teeming with crime writers. I know it’s the latest vogue but this strikes me as exceptional. It was the launch of crime anthology Down These Green Streets; Irish Crime Writing in the 21st century, edited by our very favourite Declan, Declan Burke. (Sorry Hughes.)

And I do realise some of you will find it a little hard to drop everything and pop in the Belfast direction for the NI launch tonight. But do try. I would. If I could. There are multi-signed copies of the book for sale from The Gutter Bookshop (which I believe is a lot nicer than the name suggests). I want one. It’d be the next best thing to having been there. But it’s this idea of actually paying…

It’s not just those criminally minded Irish who are ganging up. We have the History Girls. I’ve been hearing rumours for a while, and now they have got their act together. Almost. You can get them on facebook already. And from the 1st July you can enjoy their new blog.

They are girls who write historical fiction. I’m amazed they managed to get so many together for a photo, and very nice they look too. I understand they launched with a lunch, or possibly vice versa, at the home of Michelle Lovric. Should have known someone like Michelle would have an interesting house!

I suppose I shouldn’t ignore that large group of people who have their day tomorrow. The Daddies. We are an unfriendly kind of witch family, so don’t celebrate this kind of event at all. Not even with socks. (And he got a tie for his birthday, so there.) But can you really not go wrong with the books ‘advertised’ below?

Feeling the need to finish on a softer note; here is Barnaby Booth. Barnaby’s human Daddy is Stephen Booth. I believe Barnaby (I trust you can work out who Barnaby is named after?) helps with the murdering around the house.

I once started a mental list of “journey books”. By that I mean stories that are one long and difficult journey, usually walking, from A to B, done by a lone child or a group of children. These books generally require hankies, both during and after.

Linda Press Wulf’s The Night of the Burning, which is now out in paperback, is a journey book. It’s about two Jewish sisters going from Poland to South Africa. While many Jewish stories are connected to the second world war, this one starts in 1921.

Another journey book is Last Train From Kummersdorf by Leslie Wilson. This is set in Germany during the war, but it’s not primarily about Jews. So again, that makes it a little bit different. Sometimes it feels as if all war stories set in Germany are about the persecution of Jews, when in actual fact there must also have been many other children suffering hardship.

The boy Hanno and the girl Effi end up in each other’s company, and they slowly make their way to Kummersdorf, to catch a train. It takes on a sense of not being real, and you somehow doubt that they’ll ever get to Kummersdorf, or if they do, there’ll be no point in having arrived. The story is based on real events, which makes it much more poignant.

I don’t feel you can have enough of these stories, whether about Germany, the war or simply as journey books. I can sense a whole series of journey posts coming on…