If you didn’t read Hilary McKay’s Binny for Short when it came out last year (and why didn’t you?), I can tell you it has just been issued in paperback, and it is still as good. The singing ought to bring out the goosepimples on any but the hardest of my readers. 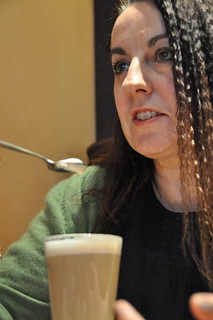 In the exciting run-up to whether or not Scotland will drift off into the North Sea next week, I have two book festivals on home ground to look forward to. First it’s Stirling Book Festival Off The Page. It has all sorts of events in libraries and schools and theatres. For fans of children’s lit there is the dystopian Teri Terry, the amusing Chae Strathie, sweet Cathy Cassidy, illustrator Kate Leiper, and the magical Linda Chapman.

Off The Page runs seamlessly into Bloody Scotland, where much murderous stuff will happen. They are even putting forensics into Stirling Castle, to find out who killed the Earl of Douglas back in the 1400s. Good luck to them.

And if you too want to be able to write like the authors who are coming here to talk about their books, then you could do worse than to have a go at the Connell Guides essay prize. If you are lucky, Philip Pullman might read what you wrote. You do need to be of an age to attend sixth form, but we are all young at heart here. You can submit from September 15th until January 15th.

On arrival in London yesterday, we had to repair to a nearby hotel’s facilities to make an emergency medical dressing repair (plasters and acetone do not make good partners, but at least no one fainted). Once done we made it on time – if only just – to Hodder & Stoughton’s 16th floor offices, with no visible blood whatsoever. The lovely receptionist even made sure I didn’t have to go up in the glass elevator by ordering me a proper old-fashioned lift.

When we got there, I made sure I sat with my newly dressed back to the windows, which according to my Photographer offered great views. (She went in the glass elevator, no doubt to show off.)

The blood aspect was unexpectedly apt, as we were there to interview Marcus Sedgwick about his new ‘bloody’ novel – A Love Like Blood. There was a slight misunderstanding as to his arrival on floor 16, which meant we had a nice long chat in the lobby, with me carefully not asking him about ‘the other stuff’ and instead discussing the high points of Gothenburg and hair raising theme park rides (neither of which I like very much). 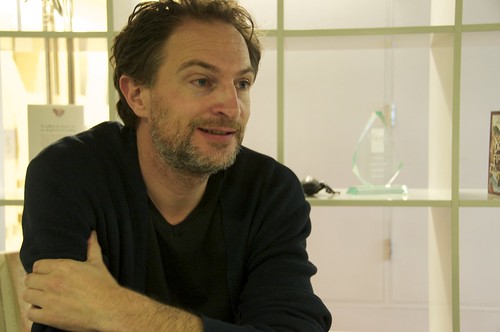 We got to meet publicist Kerry’s lovely dog, which I’d only seen photos of before. I think we’d get on; plodding walking pace and a fondness for hanging out in kitchens. (Dog, not Kerry.) We diligently interviewed, and then Marcus had to rush off to finalise things to do with his book launch, while we walked to another kitchen (the Scandinavian Kitchen, for a late Lent bun).

After that we whiled away our remaining spare time in Trafalgar Square, looking at tourists, pigeons and an enormous blue rooster, before walking over to Goldsboro Books for the book launch. Thanks to Kerry’s sun dance, it didn’t rain at all. That’s what I call service. 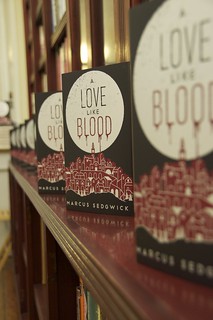 I believe there was champagne, or some such drink, judging by popping corks, but we stayed nice and sober (I am obviously not suggesting anyone else was drunk), and chatted to people, including Thomas Taylor, who does not like blood, much. I have to admit to advising him not to read Marcus’s book.

Children’s author Linda Chapman was there. And Cliff McNish and I really must stop meeting like this. That’s twice in eight days. He’s got a nice new book out about nice dogs, with no creepyness or blood.

And then my Photographer and I sneaked out before we suffered social overload, and sort of limped home in a tired kind of way.

The trains continue to be good. And bad. Horrendous late journey ‘home’ on Saturday night, with two coaches only, and rather a lot of passengers. Did they forget it’s the Edinburgh Festival? The next morning I looked at the number of people waiting for the train and trembled with fear. It’d have to be the roof. When the 10.02 arrived consisting of not two, nor of four coaches, but six, I very nearly kneeled on the platform to thank ScotRail. It was only the state of my knees that prevented this heartfelt thanks.

I want to be Nicola Morgan in my next life. That woman has the shoes and the wit that a witch can only aspire to. And she has it in a most colour coordinated way. On Monday Nicola had managed to sell out her Thrillers event, but I got in, courtesy of Nicola’s own ticket. It was a pity Nicola herself couldn’t get in after that…

Joking aside, I spent the first few minutes admiring the turquoise suede boots and the light blue cardigan with matching turquoise brooch. It’s so hard to carry that combination off, but if anyone can, Nicola can. Then once she started talking I suspected I might have to leave rather hurriedly. She promised gore, and fainthearted that I am I could imagine myself lying on the floor at the back. It didn’t get as bad as that, but she had me worried. Who’d have thought an event could be so thrillerish?

It was Nicola’s novel Fleshmarket that scared me. It replaced the book on wolves she had been writing, and I’m sure it’s ‘very nice’, really. I breathed easier as she moved on to Death Watch and Wasted. I hadn’t realised Nicola actually tossed a coin to decide how to proceed in Wasted when she came to the forks in the road, so to speak. And in Death Watch it’s hardly surprising the reader can’t guess who the stalker is. Nicola herself didn’t know at the time.

So, if I had fainted ten minutes into the talk, would the event have turned out very differently?

In my short break after the gore, I came across Ian Rankin doing something. I’m not sure what sort of something, and the photo was taken some distance off, which would explain the blur. Also found Simon Callow ‘being done’ at the entrance to the yurt, so gulped down my drink and joined the paparazzi at the back for a go at this ex-Pliny from the Roman Mysteries.

I believe the ducks have complained. It’s too dry.

The day’s second event featured Keith Gray and Tohby Riddle with Philippa Cochrane. They discussed Keith’s Ostrich Boys and Tohby’s first teen novel The Lucky Ones. The Australian is best known for his younger picture books, all of which looked very appealing in the bookshop, but I contained myself. Just.

Both books are about boys and, I think, about death. Girls feature as a plot device only, and in Ostrich Boys Keith ponders how ‘rubbish it must be to be dead’. Quite. He borrowed the idea from his favourite film Stand By Me. Tohby’s novel has something to do with Bob Dylan, and also Sydney Harbour Bridge. I think he described it as a metaphysical experience, but now might be the time to admit I didn’t understand much of what he said at all.

Linda Strachan was in the audience, and she wanted to know if they could see themselves writing about girls, to which the answer was a resounding ‘no’ from both. Boys need more books, and girls have quite enough as it is. Which may well be true. Although Keith’s inspiration came from a trailer for the girly film Sisterhood of the Travelling Pants. That’s American pants. In case you wondered.

As usual I hung in the bookshop a bit, and I happened to find Linda Chapman signing in there a little earlier, as I passed. That’s what’s nice. This looking into the shops to see who might be there.

London did what it does best on Monday night. It offered one of those balmy evenings, when it’s a pleasure to stroll along the South Bank, with the lights and the sights. The witch household had shivered under blankets as she left, but it’s a well known fact that it’s warmer in the south.

The people at Puffin felt compelled to express their love for the witch and a few others behind their successful publishing business, by throwing a party. The noise level at the Tate Modern rose a little too much, so most of my chatting happened early. And do you have any idea of how fast Nicholas Tucker can walk in a party crowd? He, and some other prey, will simply have to be caught some other time, when I will avail myself of a broomstick.

My technique for sidling up to people and start a conversation with the opening line that I haven’t yet read their book/s, needs some improvement. Worse still, was having to admit that I’d not got further on one book than I had at our last meeting, five months ago. Bad witch. Could always talk about the weather, I suppose.

If I name drop now, I’ll forget someone, or it could be that I just didn’t see or recognise some people. Kevin Brooks was there. So were Linda Chapman, Lauren Child, Linzi Glass, Charlie Higson, Graham Marks, Meg Rosoff and Ed Vere. And absolutely loads of the lovely Puffin ladies, some who weren’t ladies, and many others who do things that have to do with books.

And an EastEnder. I’m the kind of person who knows so little about soaps, that I was able to have a Coronation Street neighbour without knowing it. But I think Ross Kemp is in soaps. Which reminds me of the time I wanted to buy soap and googled Mitchell’s wool fat soap, and got EastEnders instead. Television! Bah!

I suppose a genie is a second cousin to a witch, or something. Whatever, Steve Cole of CIA fame, has branched out into magic with the help of Linda Chapman. I didn’t know Linda at all before Tuesday’s visit to the witch’s watering hole, but I understand she dabbles in unicorns and stuff. More than dabbles, actually. Linda has an impressive pile of books to her name. She even has books in a different name as well, as Alex Cliff.

Steve and Linda have co-written a book about four children who find a bookworm (what else?) in an old book, and who set about learning to become genies. There’s a tremendous amount of whizzing in and out of lamps, and masses of squabbling amongst the children as they learn and mature with their task. And for the doubting witch it was a useful lesson to find that the story went in a different direction from the one expected.

To be able to write with someone else, strikes me as almost impossible, but Linda and Steve seem to have worked out how to do it. It went so well they wrote 30,000 words too many and had to prune.

And (this is a subject close to my heart) I now know what you do if you’re stuck in your lamp for a long time and need the toilet.