Charlotte Square comes to Cumbernauld. I might have mentioned before that the Edinburgh International Book Festival have decided to branch out, and are touring five New Towns in Scotland over the next year and a half, with little pop-up festivals for a weekend, and this is the Cumbernauld weekend. The first weekend, and with a really good looking programme.

I could have wanted to do more, but limited myself to the children’s event on Saturday morning. I couldn’t resist David MacPhail, Lari Don, Barry Hutchison and Jenny Colgan. Barry unfortunately couldn’t come and was replaced by Mark A Smith, but that was also fine. Not that I knew Mark, but he had a very jolly song for us. 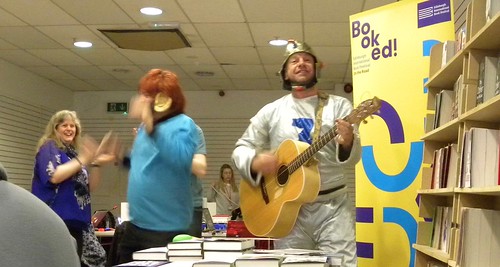 As did Macastory; two oddly dressed men from the future who sang a lot, and required hands to be clapped and shoulders shaken and other energetic stuff. The venue got changed to the pop-up Waterstones in the shopping precinct, which I thought was odd until I understood there was no ‘real’ Waterstones there. I did see the yellow buckets I’d been told about by Kirkland Ciccone, however.

The Resident IT Consultant came along to make sure I found the way, and he discussed getting lost – or not – with David MacPhail as we waited. David was first up and had some fun Vikings he told us about. I liked the polite one best, who apparently was modelled on David himself… He read a bit from one of his Thorfinn books, and then he told those brave enough to ask, what their Viking names would be. We had Danny the Granny Slayer on the front row.

Lari Don came next and talked about her Spellchasers trilogy (I know, I covered this a few weeks ago), and she wanted to know if any of us had the urge to be turned into an animal. One girl wanted to be a dragon, with an interesting idea for how to deal with the 45th President while in her dragon state. Long live creativity! 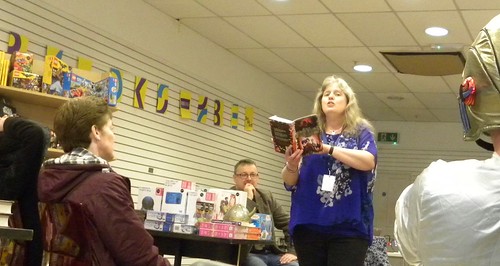 Mark A Smith followed, talking about his hero Slugboy, who seems to be some kind of anti-superhero. Unless I got that wrong. He Slugboys it out of St Andrews, which I felt was rather posh for slugs. Mark, as I said, had a song written about his hero, which we had to sing, to the tune of Glory glory halleluja, so it was terribly uplifting and all that, as well as a clever idea for audience participation.

Last but not least we had Jenny Colgan, who brought ‘her child to work’ and then proceeded to use her – fairly willing – son to hold the iPad to illustrate her Polly and the Puffin story as she read it to us. We had to do the puffin noises, so thank goodness for Macastory who didn’t seem to mind making fools of themselves. 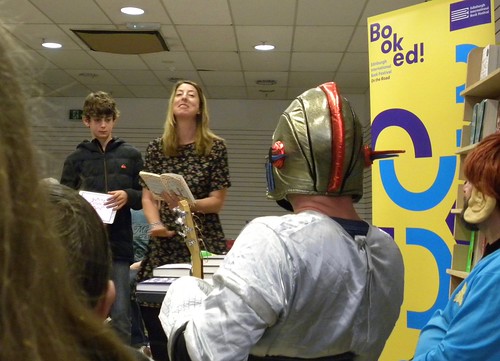 They also provided fun interludes, with songs and commentary, and we learned some sad facts about the future.

And that was it. The Resident IT Consultant led me safely back to the car (free parking in Cumbernauld!) with only one wrong turn. I’m hoping the authors were suitably accompanied back to somewhere they wanted to be, too. If not, there are authors to be discovered in downtown Cumbernauld. 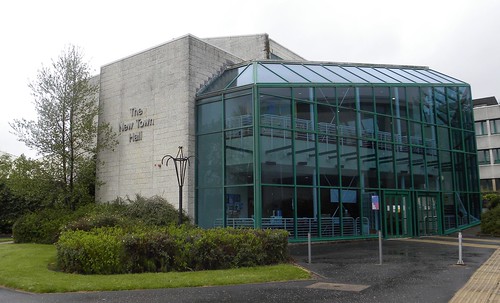