I encountered Elizabeth Wein at Stirling station as I caught the train to Glasgow yesterday morning. We were both heading to the 2016 Scottish Children’s Book Awards. ‘What are you doing here?’ I asked. ‘I missed my train,’ she replied, which might have been true, but I wanted to know why she missed it in Stirling, seeing as Elizabeth has her own perfectly good railway station from which to miss trains. I met ‘Mr Wein’ who is very nice, but unfortunately I gave him the wet handshake. Sorry! I wasn’t expecting to be socialising that early. 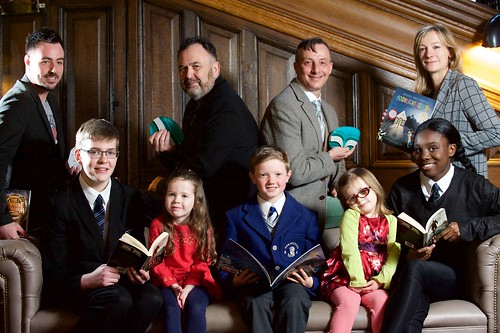 We made it to the Glasgow Central Hotel, along with 1000 children and most of the shortlisted authors for this year’s award. Not having missed ‘my’ train, I arrived just in time for the photoshoot, where school children posed with their favourite authors. We were only a little bit in the way of hotel staff and their drinks trolleys and things, and there was an umbrella in my way and my camera stopped working for a bit, and someone mistook Elizabeth’s lovely book for photographic support… 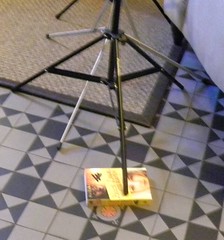 I repaired to the Green Room, managing to lose most of my marbles on the way. Apologies to anyone subjected to my complete lack of conversational skills. (Age and sleep deprivation, I reckon.) Chatted to ‘Mrs Danny Weston’ and Lindsey Fraser, who was there representing Joan Lingard. I turned down the kind offer of exclusive interviews in place of informal gossip. And not every event has someone whose job it is to go round hunting for The Blue Feather. (Never discovered if it was found.)

Refreshed by a cup of tea, I went to the awards ceremony for the Older Readers, where Danny talked of [non-pc] battleaxes, and of wanting to terrorise children, which he did very nicely with a picture of ‘those dolls.’ Elizabeth impressed the audience with a photo of herself on top of an airborne plane. Lindsey took a photo of us to show Joan, and described how Joan uses an iPad for all her research.

Two students did an interview with the authors and there was a Q&A session, which revealed how Danny runs after his characters with a notebook in his hand, to see what they will do, and Elizabeth said she always has to tell her book cover artist that they’ve got the wrong plane… There were prizes for best book reviews (they won an author!), and then there was the Scottish Children’s Book Award which went to Danny Weston for The Piper. He thanked his wife, his editor Charlie Sheppard and his ‘friend’ Philip Caveney who taught him everything he knows. 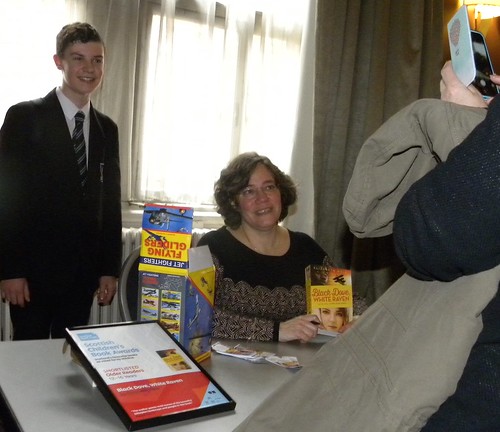 Having brought loads – well, five – books to be signed, I joined the queues and was given a model plane to make by Elizabeth. Danny’s queue was too long so I went for lunch instead. Found Gillian Philip tackling the sandwiches, and we talked about motherhood and kelpies. Elizabeth Laird asked who I was, so I explained that I’m the one who always emails her after every event. She wondered if she ever writes back, and I assured her she always does.

The other morning session, which I had to miss, was for the [youngest] Bookbug Readers, and the winners were Simon Puttock and Ali Pye. Simon will be carrying his prize around for a couple of days, until he gets home. While ‘Mrs Weston’ secured sandwiches for her hubby I went and joined his queue, which had shrunk a little. Elizabeth Wein was interviewed on camera by someone, and I had the pleasure of witnessing another wet handshake, so at least I’m not the only one. 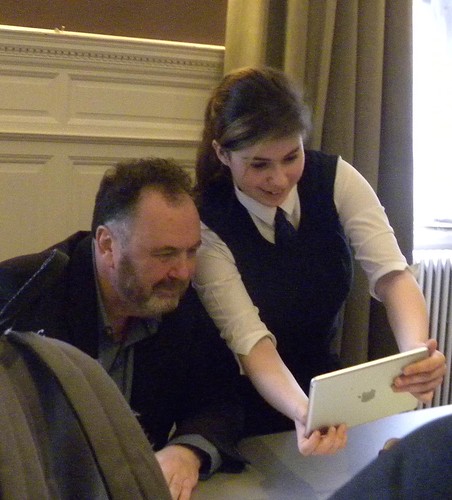 The Younger Readers award session started after lunch, with host Fergus introducing Gillian Philip, Liz Laird and Ross MacKenzie. When Fergus said they were going to read to us, they rebelled and said they were not. They’d decided to do things differently. (Good for them!)

Gillian talked about island holidays, cliffhangers, Saturday cinema and had a photo of the cutest puppy in a teacup. Her – very – early work consisted of many three-page books. Liz talked about Ethiopia and the running everyone does there, and mentioned the Emperor’s lion in 1968, and said she wasn’t guilty of that murder she was accused of. She also writes her books on the backs of used paper. (My kind of woman.) Ross described how you can find magic shops almost anywhere if you just look closely, and said an early reading memory was The Witches at school. 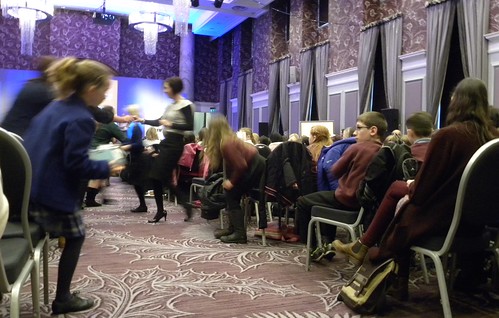 After a very successful game of Consequences (it’s funny how funny those little stories always are), it was time for more prizes for reviews (another author), as well as a prize for best book trailer (most professional). And then Ross MacKenzie went and won his category of the 2016 Scottish Children’s Book Awards for The Nowhere Emporium. He did the usual, thanking his parents and his wife and his children and all those other people he might have forgotten. 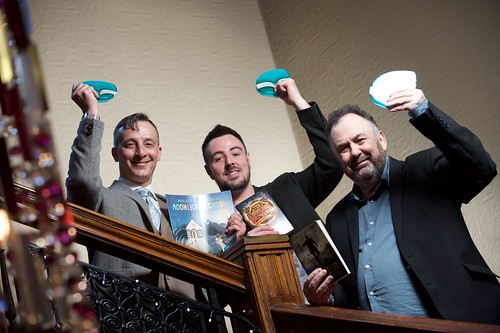 The children queued up to have books signed, and I went to find a train to take me home. Which means I didn’t take any more of my failed photos of Liz. I suppose there’s always next time.