I received a phone hug last night. This is a technically complicated feat, but it can be done. I sent Son to (a former) prison. Actually no, he went of his own accord. Långholmen is rather nice these days, when you’re not inside for all the wrong reasons. Daughter and I spent a few days there ten years ago, and now it was Son’s turn (I believe it was some kind of conference). And since he was going to be in the actual Stockholm at the actual same time as Meg Rosoff, I instructed him to go to her public event at Kulturhuset yesterday. 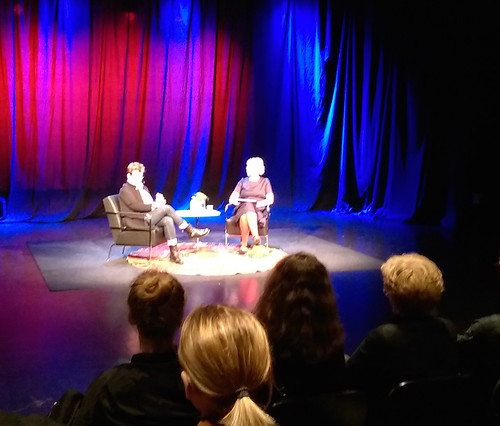 Son elbowed the competition out of the way and managed to get close enough to the ALMA winner to receive a hug, which was to be passed on to me. Which he did over the phone. I’ll accept that.

The programme for this year’s Gothenburg Book Fair arrived yesterday as well, and lo and behold, they have invited Meg to come. (I just hope she is still upright by the time September comes round.) I consider this all my doing. First I badgered anyone I could for years about how they must have her. And then, as I reported a couple of months ago, I gave up. Decided it would never happen, and it was better to face facts. This is always a good technique, I find. Makes things happen much faster. (Should have thought of it sooner.)

I think I may have to go. Even if Bookwitch Towers is being rebuilt, or something, I must be able to abandon ship for a long weekend. I mean, what could possibly go wrong with builders in the house?

Anyway, the circle. We went eleven years ago, Son and I, as complete rookies. That was when his favourite won. Now mine has won. It’s only fair. He can come, if he wants. And like eleven years ago, Jonathan Stroud will be there. Plus a selection of archbishops and other famous people, such as our favourite French phycisist, Christophe Galfard.