A pile of ideas

It’s about an inch thick, with a rubber band keeping all the bits of paper under control. They are occasionally cuttings from magazines or newspapers, but mostly my own homemade ‘note paper’ cut from the backs of A4 sheets; old letters or press releases. You get eight if you cut it one way, or nine if you cut it the other way.

They are my ideas for blog posts. Sometimes I sprout so many ideas, so quickly, that I have to write them down to keep for later, and then I stuff them in with all the others, and when I’m desperate for something to write, I search through the bunch of notes.

I’ve only just realised that some of these notes have been with me A Very Long Time. Some are almost as old as Bookwitch. The blog, not the witch. I can tell from the handwriting that some of them were written absolutely ages ago. My writing has changed, mainly because I mostly type, and have half forgotten how to use a pen. 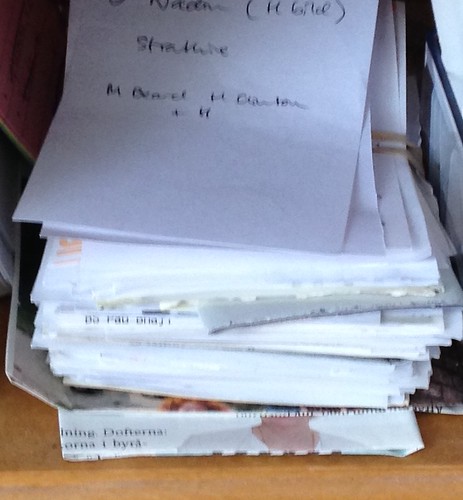 At times I find a real gold nugget in there. (Don’t be silly. Not gold gold. Just a good idea.) But mostly there’s a reason they have been rubber-banded in for over ten years, and that’s because the idea is terrible, and I’ve clearly not been desperate enough to use it. Every now and then I go through it and throw away ideas that will never amount to anything. Or the words are so incomprehensible I have no idea what I had in mind.

(The illustrated ideas above can be explained as follows: Photo of Jo Nadin. Prize for Chae Strathie. And it needs to be pointed out that when Hillary Clinton and Mary Beard first met each other, it was in the presence of Daughter. Sort of. And that I’ve not yet managed to do anything with it.)

Fascinating Aïda used to sing a song called Taboo. One line was about inviting a vegetarian to a barbecue. In the case of Daughter yesterday, it was more about the wisdom of asking the vegetarian to order the food for the AstroSoc barbecue for Freshers’ week. I have no wish to ask for more details as to what she actually bought. (Grilled mushrooms anyone?)

The event was shared with the Physics students (might be Quantum Soc?), who wanted them to have a plan B in case of rain. It won’t rain, Daughter told them. And, you know, Astrophysicists are surely that little bit closer to any potential rain, so would know what’s coming. That’s my theory.

It was Friday the 13th. Did you notice? My travelling went better than the date made me expect, but I suffered the ignominy of being mistaken for a woman who goes to Blackpool. By the time I got to Manchester Piccadilly the platform was full of (superficially) similar women, all heading for fun in Blackpool. I changed trains in Preston, and the Grandmother later told me about the time when she did that, and a kindly man tried to tell her she didn’t have to, because it was a through train to Blackpool. (He found it hard to grasp that she wanted to go to Glasgow.)

I spent part of the day reading about devils and demons. In two separate books. What are the odds? I expect the date helped. First I read a short story about The Good Little Devil (with my breakfast, if you want to know). Then I moved on to John Connolly’s latest Samuel Johnson book, which as the disCERNing fan knows features CERN and the Higgs Boson.

Once Daughter had got the barbecue going, starring whatever devilish veggie-burgers she could muster, she left the two Socs to their fate and grabbed her gown (academic, not dressing) and dashed downtown for her meeting with Hillary Clinton and Peter Higgs.

Rowan Williams. Mary Beard. Tim Berners-Lee. Jane Goodall. To name but a few ‘nonentities’ who were there. Apparently the former archbishop said his only claim to St Andrews fame was having married two of its former students.

I mentioned Glasgow. Like the Grandmother, I went to Glasgow, where I overheard someone talking about crayfish kebab. Walking from Glasgow Central to Glasgow Queen Street I came across a poster for safe sex. No, I didn’t. I looked again. Surf and Fax was being offered. So did I hallucinate that crayfish kebab?

Once I’d reached my destination I learned that the Hungarian Accountant is in town. But also that Eoin Colfer isn’t.