The programme self-destructed. Or so it seemed when I went back to double-check I had the right names and the title for the event. Because, you know, I am old, and I forget. 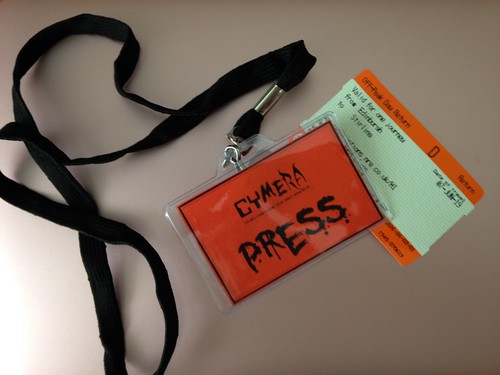 Anyway, for my first Cymera event on the first night, it was all potions and poisons, and they were far too cheerful about these dangerous substances. They were Melinda Salisbury and PM Freestone, talking to Laura Lam, and the rule for the evening was ‘no spoilers.’ Unfortunately, this rather cramped their style, as nearly everything they wanted to contribute could count as spoilers.

Apart from having to stop themselves from giving too much away, they seemed to get on very well, laughing like a group of friends out, chatting away about what they write about. I think the audience got what they wanted; they seemed to be knowledgeable about the same stuff, and as they filed into the Upper Hall, they looked like fans too. I know that sounds silly, but they did. Sometimes the, well, wrong people go to events.

I wondered what the bucket was for. One of the volunteer ushers carried around a bucket. Seems it was for money. (I sent mine by bank transfer…)

Pleasance, where the Cymera Festival is doing its thing this weekend was very pleasant. At least if you ignore the lift. I will never ever go in that lift again! Afterwards I was further alarmed when one of the very helpful and polite volunteers came up to me to say the lift was now activated..! I don’t think I want to know.

I arrived early. Again. Was ushered to the lanyard table, where I found Sarah Broadley and Lari Don, and also my nice orange badge. Came across one or two people I knew, including someone who also knew me, but we both agreed that while we had met, we had no idea where or when. LJ McWhirter sat in front of me at the ‘poisonous’ event and had much news to share.

The venue does look very good, nicely decorated, albeit with too many stairs. And that lift. Fashionable café and for the weekend a lovely bookshop stocked with all the science fiction, fantasy and horror you could want. Possibly more.

Starting with the third book in a trilogy is not something I often do. If only one book from a trilogy is to be read, I tend to prefer the first, while also risking ‘having to’ continue, because once started you will want to finish. 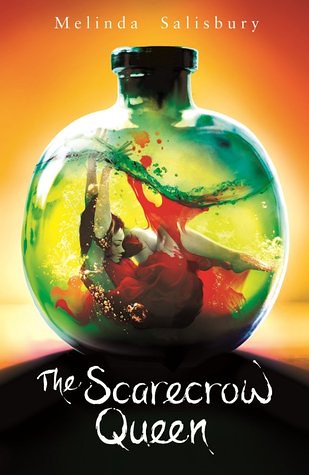 I only came across Melinda Salisbury a few months ago, when I heard much good about her first book, The Sin Eater’s Daughter. I was aware there was a second, but before I knew where I was, I found the third one, The Scarecrow Queen in the post, and after some agonising over time, I decided to jump straight in and begin at the end.

Which is not always a bad thing. It took me a while to learn who’s who (especially as Melinda doesn’t go in for the sometimes so tiresome explanations to help new – or forgetful – readers), but from then on it was almost as if I’d not skipped the first two.

A very bad Prince has ousted a good King and is now busy killing and controlling the people around him. This is fantasy, and he has golems and clay dolls at his disposal. He holds some of the good characters prisoner, while others are busy picking up the pieces from a devastating attack elsewhere. Twylla is the sin eater’s daughter and she is trying to get back to free her friend Errin, who is an apothecary, so that they can attempt to stop the Sleeping Prince.

This is a perfect fantasy for teenagers, with some strong female role models among the main characters. There is fighting and there is romance, and a lot of backstabbing as you hope you know who is on your side, while discovering who can’t be trusted.

Melinda avoids a too sugar-sweet ending, having kept the reader guessing throughout. I suspect the future will bring many more great books for her fans to enjoy.