At the back of The Missing Michael Rosen recommends many excellent books, both fiction and non-fiction, mostly on WWII related topics, but also books in a similar vein from later on. Because we never learn, and someone, somewhere is always doing something bad to another human being.

I thought I’d mention a few books here too, before we start forgetting again. It’s anything but an exhaustive list, and I have tried to choose books that are seen more from the German or European side of the war, and actually during the war.

One I share with Michael is The Children of Willesden Lane, by Mona Golabek with Lee Cohen. Admittedly, this one is set in London, but not being fiction it shows the fates of unaccompanied German minors.

The Girl in the Blue Coat by Monika Hesse. This is about the resistance in Amsterdam.

A Winter’s Day in 1939 by Melinda Szymanik, begins in Poland and then turns into that awful kind of forced transport of innocent people to somewhere a long way away.

Rose Under Fire by Elizabeth Wein, which features Ravensbrück as seen from the inside.

Once, Then, Now, After, Soon, Maybe, Always. All by Morris Gleitzman. All – probably – wonderful. I say probably, because I’ve not managed to keep up with the last ones. But there are ways of remedying that.

The Children of Willesden Lane

This is not a fictional tale about WWII, but the memoirs of Lisa Jura, who at the age of 14 came to London from Vienna with the Kindertransport. Written by Lisa’s daughter Mona Golabek with Lee Cohen, it is a simplified version of what Lisa used to tell Mona about as she grew up.

It lacks a little of the good quality story that you come to expect from this topic, but in the end I found I just wanted to see what Lisa’s life would have been like in England during the war. And as with many other books about refugees in the past, the reader marvels at how differently [from today] the new arrivals were treated by the British. At how many opportunities were offered them, even during the war.

And it makes you feel ashamed.

Lisa was one of three sisters, chosen by her parents for her age – not too young and not too old – and for her skills in playing the piano. They hoped she would be able to make something of herself in a new country. 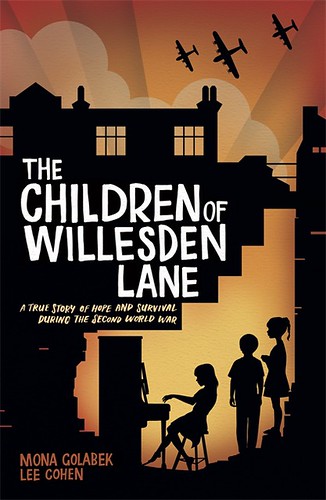 Things didn’t always go to plan, but the new arrivals were looked after. In Lisa’s case in a house full of child refugees, in Willesden Lane in London. And that confirms my theory that when you lose someone, while no one can replace dear family members, if you have someone else, your life isn’t empty. The children of Willesden Lane had each other, and they were looked after and loved by Mrs Cohen.

While not unique, this is still a very heartwarming, true story. Bad things happened, but the good things carried people through.

I would like to hope for a few more Lisas today.