We did as we were told. Or rather, we didn’t. Our SELTA host Ian Giles suggested we could ‘get a cup of tea, sit back and relax’ as we listened to – and watched – the Zoom webinar late afternoon today, with Nichola Smalley and ‘her’ Swedish author Andrzej Tichý, talking about his novel Wretchedness. (What we did was continue with our work, but accompanied by an interesting, literary conversation.)

They have talked about this before, and I have written about it here. But it was worth returning to it again, because the book has been longlisted for the International Booker Prize 2021. This doesn’t happen to lots of Swedish novels. In fact, I believe it might be a first.

I have to admit to not knowing very much about the International Booker Prize. I looked it up, and discovered it’s worth £50000 to the winning pair, i.e. half to the author and half to the translator. That’s very good, especially for the often overlooked translator.

The event was organised by SELTA and supported by the Swedish Embassy’s cultural department, which shows that they take this kind of thing seriously.

I’m a little bit biased, but I have crossed my fingers for a successful Wretchedness.

I ‘went to’ a webinar on Thursday evening, to hear Nichola Smalley talking to Swedish author Andrzej Tichý about her work on translating his novel Wretchedness, which has had some good reviews. Hosted by Brookline Booksmith, someone had done some thinking of the timing. It was early in the US, but late in the UK and later still in Sweden. But we were at least all awake.

I have heard Nichola speak before, live, and I was struck by how well I know her voice. I have not read the book, nor had I ever heard of Andrzej. But it seems that this might be rectified if he’s as successful as people believe. And no, that’s not a very Swedish name. He’s half Polish and half Czech, but also Swedish.

Andrzej started by reading a few pages, before Nichola talked about how she’d found the book. It’s not an easy book, apparently. Nothing you’d take to the beach. And no, it didn’t sound like it from either the reading or the description.

Nichola asked Andrzej to read again, but he didn’t read what she’d expected. But ‘apparently I need conducting’, he said as Nichola apologised for pushing him about. Theoretically, of course, with everyone in their own room, in their own country.

Speaking of rooms, Andrzej had a beautiful wall of books in the background and Nichola had some very fetching children’s art behind her. There was also a car alarm somewhere, making it hard for her to concentrate.

There were questions for both of them, with Ian Giles asking ‘how was it working with Nicky as a translator?’ She instructed Andrzej to say only nice things. Which he did. I think. Someone else was interested in the time it had taken Andrzej to write the book, and whether he’d suffered writer’s block

And we learned how useful it had been for Nichola to meet Andrzej and to be able to discuss his book with him and ask him endless questions, in order to translate it. It was a difficult book, and she’d already read it twice, so meeting Andrzej was really helpful.

All things come to an end, and the host came on again, saying she hoped people might buy the book from them – but only within the US – and that they’d be back with more talks during the autumn.

Bookwitch goes to a conference

Some people didn’t look anything like I’d imagined them. But then why should they? I went to a conference at the University of Edinburgh yesterday. Along with some similarly minded colleagues, Son has spent some time organising the Nordic Research Network conference, and the embarrassment factor of having your mother there was one I didn’t want to deprive him of. Both parents, actually, as the Resident IT Consultant had been roped in to chauffeur the sandwiches for lunch. 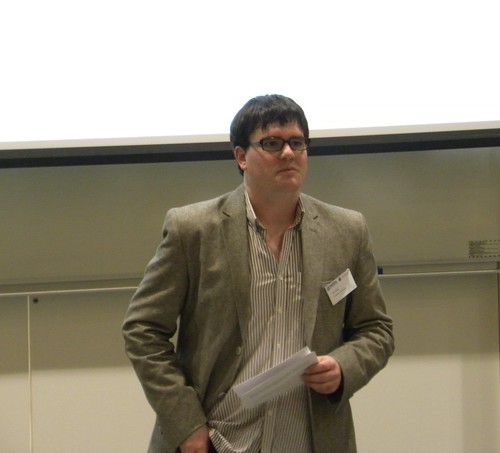 And I did feel that this was my kind of thing; language, literature, translation. As I said, I’d been in contact with or heard of some of the people before, and you have a mental image of them, but they were generally less blonde than I had expected. Being realistic, I decided not to go to everything (it’s on today as well), but swanned in towards the end of the day when Son chaired the Translation session. 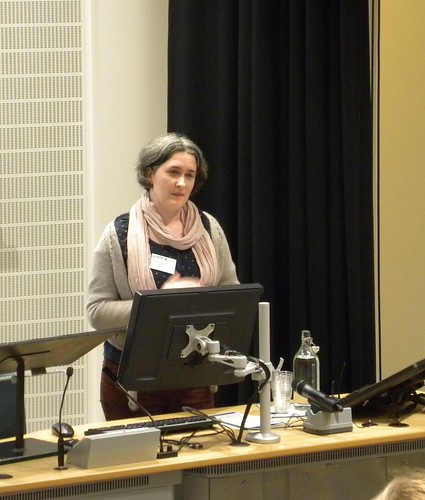 Charlotte Berry talked about Chatto & Windus and their British Translations of Maria Gripe. It was based on notes the publisher had kept on how they discussed and decided what to translate, and that was really quite interesting. Basically, it was all down to networking, with an editor chatting to the right person somewhere else, trying to interest them in their book. And after that it was a case of organising the translating. One translator had been judged likely to be all right, because she was a mother herself… Charlotte said it was a hard topic to write about, since she didn’t want to offend anyone. 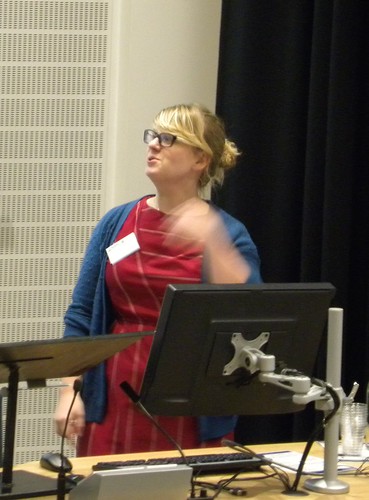 Agnes Broomé talked on the subject of In the Wake of the Crime Wave – How to Publish Scandinavian Fiction in Translation in the New Millennium. Swedish books account for something like just over 1% of translated fiction in the English speaking world of books. Of 2000 fiction titles a year, 600-800 are translated, which is pretty good. The Nobel prize and the Astrid Lindgren award raise Sweden’s profile. (Astrid has been translated into 98 languages, coming after Shakespeare and Agatha Christie, but before Dickens and Plato.) In the past Swedish books went abroad via Danish or German, but now it is all through English. In the 1970s most translations were of children’s books, while in the last decade it’s been mostly crime. The risks with crime possibly becoming less popular are that because people have concentrated so heavily on crime fiction, other genres have suffered and are less active. 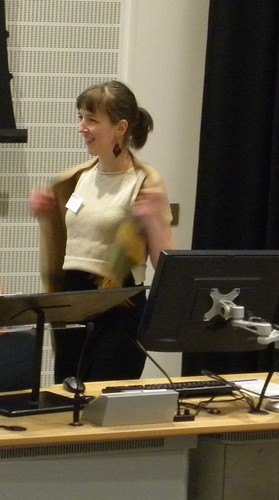 Finally, Nichola Smalley told us about Contemporary Urban Vernaculars in Swedish Literature, and what translators do to make it work. The ways to do it are Compensation, Replacement, Representation, Adaptation or Standardisation. And the advice is not to translate dialect, though of course some do, as it’s integral to the plot in certain cases. Nichola’s conclusion was that translators work hard to avoid standardising texts, and that the finished work is often down to more than the named translator, who has probably discussed solutions with many people. She gave examples from a couple of recent Swedish novels.

There was a Q&A afterwards, with questions of the kind you’d expect from a more expert kind of audience than I usually encounter.

After coffee the first day ended with a keynote speech by Mads Bunch from Copenhagen, on the subject of North Atlantic Literature in a Scottish Context – Iceland, Faroe Islands and Orkney. (Privately I wondered what dear old Shetland had done to be excluded, and as though he’s a mind reader, Mads began by explaining why not.) 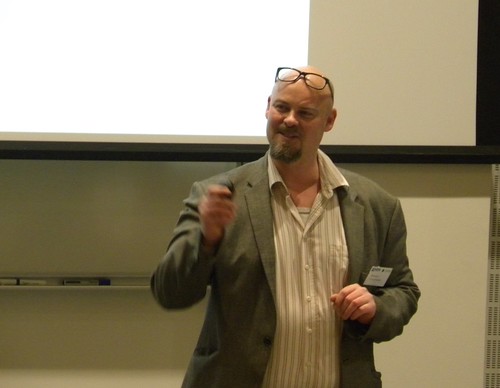 I was surprised that he mentioned fairies, until I worked out that they sound much the same as the Faroes. The Faroese are descended from seasick Vikings; those who felt so bad on the way to Iceland that they asked to be allowed to stay on the Faroe Islands.

According to Mads the peripheries (I think that’s the above islands) don’t tend to influence each other in literature, as they are sufficiently similar, and have less to give. The good stories come from the contrasts between modern westerners and the isolated islands. Mads told the story of Edwin Muir from Orkney, who travelled 150 years in the two days it took him to leave Orkney and arrive in Glasgow in 1901.

These days there are plenty of new things in Icelandic and Faroese literature, whereas Mads reckons there is little change in Orkney. They continue with their sagas, while the Icelanders write about the economic collapse, and the Faroe Islands have a thing about Buzz Aldrin…

In the Q&A session, an Icelandic reader pointed out how tired she is of hearing only Laxness mentioned all the time, and talked at length about her own favourite author (whose name I didn’t catch) who is quite excellent. And apparently they have a lot of bookshops in Iceland.

After suitable thanks, Son sent us upstairs to an evening reception with music and Lidl rye bread and cheese and olives, washed down with wine and IrnBru. Thinking of today, I made my excuses and hobbled in the direction of my train home (the sandwiches need chauffeuring one more day), instead of joining the others for dinner somwhere.