I’ve had to get in my specialist science reviewer again. It’s nice having all these complicated books come my way, but I have no wish to ruin what could be a perfectly good review by doing it myself. So, to kick off non-fiction month, here’s the Resident IT Consultant:

When I reviewed Nicholas Mee’s last book, Higgs Force, I mentioned that not much of his book was actually about the subject of the title. The same cannot be said for his new book, Gravity – Cracking the Cosmic Code. This book focuses much more tightly on its subject, following through the development of human understanding of gravity from classical times to relativity, quantum mechanics and string theory. But unlike the Higgs boson, the subject of this book has already been explored by countless other writers. What makes this one special? 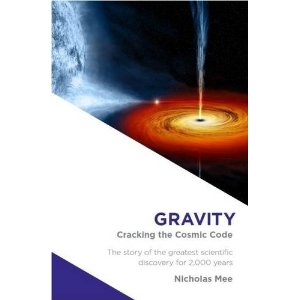 The first half of the book covers the well-trodden path from Babylonia to Newton’s Principia. The story is well told, nicely illustrated and helpfully enriched by a series of short puzzles (with answers), which encourage the reader to engage more actively with the content. The text is well supported by copious notes and I particularly appreciated the cross-referencing of the notes to the pages to which they related (in many books you have to work out which chapter you are reading, before you can find the corresponding notes).

The second half of the book covers more recent developments including relativity, black holes, the role of symmetry in physical force, string theory and cosmology. This part of the book is more descriptive with fewer puzzles to test your understanding on. The clarity of explanation remains good but it gets progressively harder to keep up and I found that the chapter on string theory did not provide me with the same level of insight as the rest of the book.

Nicholas Mee’s book should be accessible to anyone with a basic understanding of science, and would be good background reading for a bright GCSE or A-level physics student. Mathematical concepts are well explained, but there is no real mathematics in the book and there were one or two places (for example the explanation of gravitational fields within a hollow Earth) where I would have welcomed a little more mathematics (perhaps in a note, or by following a reference).

Well, I’m glad the book was enjoyable – I love the title! – and I’m relieved the Resident IT Consultant didn’t quite get the string theory, either.

I will have more non-fiction during November. It will mainly be on a somewhat easier level.

I just knew the day would come. And here it is!

I have given the Resident IT Consultant permission to review a book for me. All will become clear if you read on. It’s the kind of book I’m not as qualified to review as I’d like to be. I know I covered Anne Rooney’s Physics book a while back, but this one takes me out of my comfort zone. And when I saw how eagerly the poor man grabbed hold of Higgs Force by Nicholas Mee, I came to the conclusion it would be a kindness to let him write a review.

My impression is that this is a really interesting book. It’s just that I couldn’t say anything relevant or intelligent even if I tried. (In order to possibly gain advantages of some sort, other family members have hinted I might just understand it.)

“Higgs Force is clearly designed (or at least, titled) to capitalise on the interest surrounding the impending confirmation of the existence of the Higgs particle. Although it devotes relatively little space to the work of Peter Higgs and the Higgs particle, this is not a weakness as it provides a well-written and clearly explained overview of the way in which our understanding of the fundamental forces in nature has developed over the last two thousand years. I very much enjoyed reading it.

Popular books on complex scientific concepts can approach their subject in two different ways; they can focus on human interest, describing people and incidents linked to the concept, or they can try to explain the science and how it has developed. Many popular science books today completely ignore the science. Others, like Simon Singh’s book on Fermat’s Last Theorem or Anne Rooney’s The Story of Physics give roughly equal weight to both. Nicholas Mee’s book concentrates mainly on the context and development of the science, with much less attention paid to the background and personalities of the individuals involved.

The book is well illustrated throughout. It provides a very readable account of developments in our understanding of natural forces, how these have led to our current view of fundamental particles and the role of symmetry in our understanding of the universe. Readers without any formal training in Physics will probably need a certain amount of intellectual curiosity and determination to complete it but I believe they will find it rewarding. It might be particularly suitable as preliminary reading for those intending to study Physics at university.”

And there you have it. Not our normal bookwitch fare but quite intriguing all the same. I suspect that Daughter is about to launch another review of the book over at her place, one of these days. Isn’t it nice when the generations grapple over a book?