I made my London Book Fair debut this week. You already know why I was in London, and I happened to have an afternoon that needed filling with something, and it seemed silly not to test the waters at Kensington Olympia now, rather than travel to London specially for it, without knowing whether it’d be for me, or not.

Because that’s what I’d been told; that it’s not for the likes of me. Didn’t matter how many nice and supportive people said the opposite, when it was one person’s comment that stayed in my mind. Because I believe it was said on the basis that bloggers are wee little things who like reading books and reviewing them. Nothing about the bigger picture, or meeting up with book people in general.

In the end I didn’t see many people I knew at all. Partly because I’d not planned ahead – which I will do next time – either as regards arranging to meet, or to check what talk will be on where and when.

As I arrived I could hear a voice that sounded like it belonged to Mary Hoffman, and it did. And there she was, at Author HQ, talking to an audience about Author Collectives. I saw her briefly afterwards, lovely red hair and – I swear, purple lipstick – as she and husband Stephen Barber ran for something or other, hands full.

I wandered round the Children’s Publishing area upstairs, and with hindsight I understand it wasn’t merely full of people and companies I know, because it was mainly children’s publishers only, not the ones who do everything. So I saw Usborne’s sweet little ‘house,’ and I saw Andersen, with an active Klaus Flugge chatting to someone in the corner. 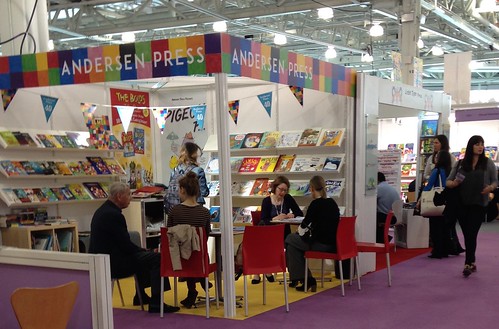 The next event at Author HQ was hopeful authors pitching their books to agents, which I only stayed briefly for. Eavesdropped a bit on another talk on non-author based books, which had a big and attentive audience, which is why I stayed on the sidelines. 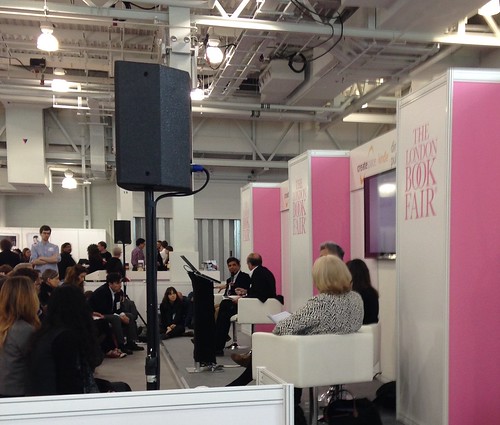 What I wish I could have caught, but was too late for, were events with Daniel Hahn, something else on children’s publishing until 2020, and the star turn of the day, Judith Kerr in conversation with Nicolette Jones. (I did run into Nicolette at the Barbican in the evening, so found out it had been good, that Judith had trended on Twitter – and that she had had to ask what this meant – and that she had refused the wheelchair laid on by her publishers on account of her recent hip operation, but Judith preferred to walk next to the wheelchair…) 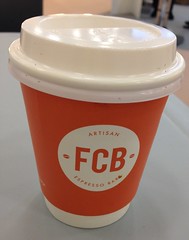 I understand that by the third afternoon the LBF would be quieter, and it was certainly nothing like it is in Gothenburg, say, where you can’t move for people. I was offered the opportunity of winning a Kindle or an iPad, and for some reason I declined this… Maybe I could have won?

Had a cup of tea from what I will now think of as Frank Cottrell Boyce’s little moneyspinner; the FCB Artisan Espresso Bar. (It’s probably got nothing at all to do with Frank.) 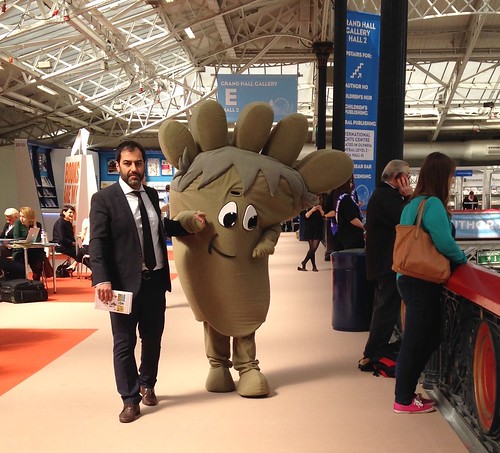 I happen to know that a reasonable number of people I know were there on Thursday. It’s just that I didn’t know where. Or when. As I said, I could have found out, had I not left it until the last moment to decide to go. I witnessed a girl carrying her head in her hand, and there was a padded foot walking about with its minder. Which was nice. 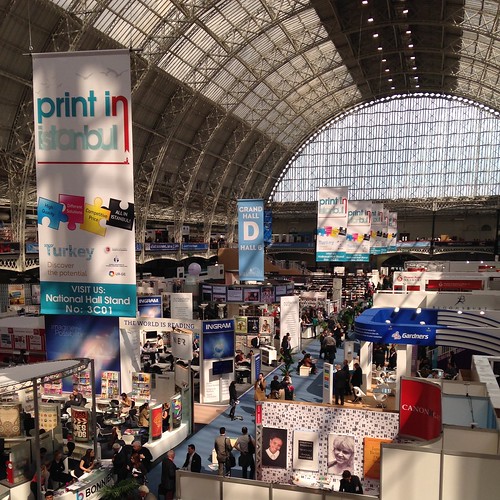 The glass topped building of Olympia is beautiful, and I wouldn’t mind seeing it empty one day, the better to appreciate it. I walked up a purple staircase, and decided it was so tall that I’d get the lift down… There were men pushing those big trolleys around that you see in films, where they hide the corpses. Here I suspect it was mainly rubbish, and not lots of dead bodies.

Speaking of which, I glanced at some of the LBF publications lying around and learned that there is a new Albert Campion being published, not written by Margery Allingham. And I don’t know what I think of that… 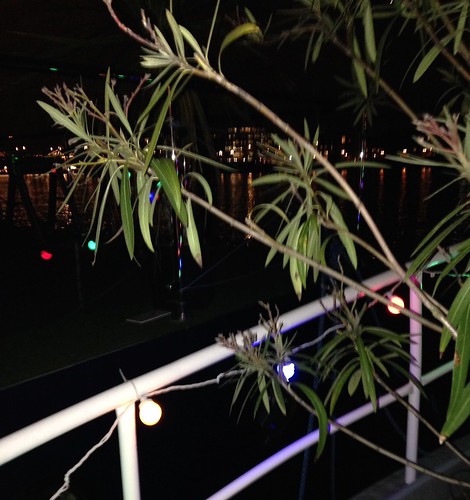 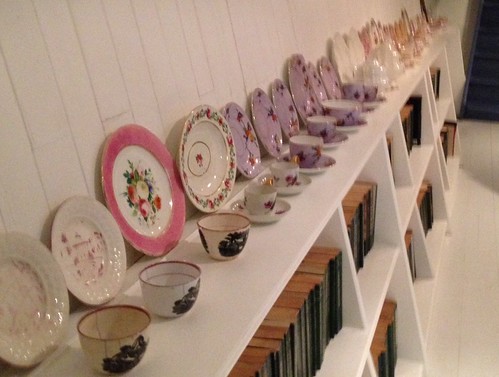 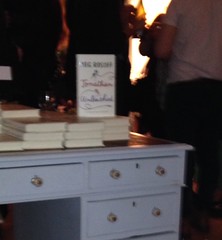 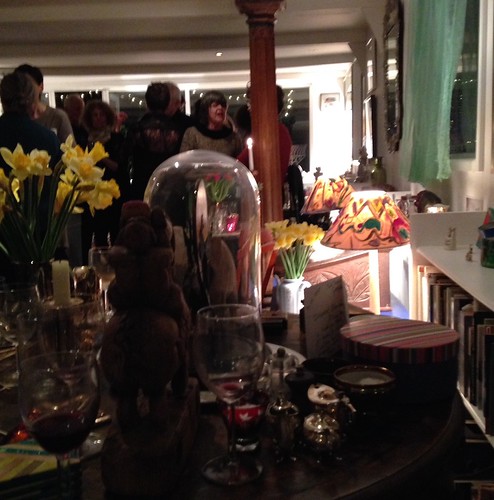 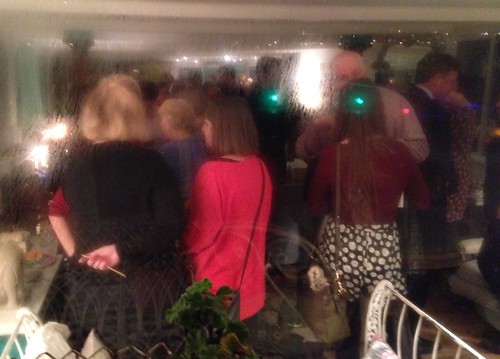 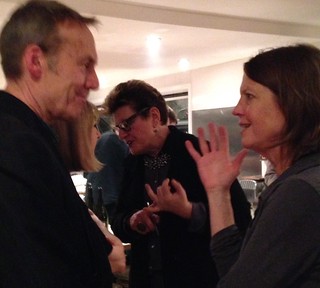 I’m not a betting witch, but I’d still be willing to bet that Amanda Craig, Nicolette Jones and Nicholas Tucker don’t get review copies sent out with a teaspoonful of plastic jewels wrapped up (very prettily, I admit) with the book. I’m guessing they’re meant to put me – us – into such a good mood that not only will I read the diamond-encrusted book, but I will love it.

(As it is, I am still fuming over having to crawl around on the floor, finding the pretty, but plastic, jewels after they fell out of the tissue paper parcel. I wasn’t taking care, unwrapping it. How could I have guessed I had sunk low enough to be on the diamond/tissue paper packaging list?)

It doesn’t help that the accompanying press release (press, hah!) mentions the publicity department has a pile of books for bloggers only. So exclusive. Not.

Frequently I find that the round robin emails from PR departments assume bloggers need to be herded like children; told what’s expected in return for review copies, and occasionally accompanied by jolly cries about competitions and films and special blogger author meetings.

Back in the infancy of Bookwitch, there must have been relatively few bloggers on the publishers’ mailing lists. I recall being treated like a real person, put in the same room as the formidable reviewers I mentioned earlier. I was treated like the adult I unquestionably am.

(Please take no notice that I am having a toddler tantrum right now.)

I don’t know for certain, but I suspect the PR departments now have a press list, and they have a bloggers list. I am on the latter, because undeniably I write – and review on – a blog.

But I am actually hurt to suddenly find myself demoted to teen fandom, after years of reasonably professional contact with the fantastic and hard working publicists I have come to know. Those who have never met me can be forgiven for believing I am a starstruck twenty-something.

I don’t feel I belong in the group of people guesstimated to be twenty years old and with a disproportionate fondness for vampire/dystopian romances. Nor do I harbour too many fan style crushes on their authors. A second class type of reviewer is being created. Hopefully with all the best intentions, but still. It’s a nice little hobby.

Clearly I need a new label. Blogger has become a derogative term. Suggestions, please? At this rate I’d rather be a housewife.

Did anyone watch Picture Book on BBC4 over recent weeks? We recorded it and watched later, so this comment isn’t as fresh as it should be.

Very good programme, and quite informative, even if the choice of books was a little predictable. At times it seemed as if they had decided in advance who they wanted to interview, and they had to find something of theirs that actually counted as a picture book. As you know I love Philip Pullman a lot, but to count His Dark Materials as a picture book, is perhaps not strictly correct.

All the big names in children’s literature had been interviewed, and I was startled to realise how many of them I had actually met. I discovered I had even met one of the book characters mentioned, which is a little weird, having had afternoon tea with Hatty from Tom’s Midnight Garden.

It was nice to see Nicolette Jones and Nicholas Tucker, along with Davids Lloyd, Almond and Fickling, the laureates Jacqueline Wilson and Michael Rosen. Eoin Colfer was funny as usual, and it was good to get some background on Shirley Hughes’ books from Shirley herself.

If I haven’t mentioned all, and I know I haven’t, just complain. I’m used to it.