The Scots Magazine arrived at Bookwitch Towers courtesy of the goody bag from Bloody Scotland. Twice, I believe. It’s quite a good magazine. Even the Resident IT Consultant shares this opinion, and he is hard to please.

He has been known to buy the odd copy, too. And when Helen Grant mentioned she was in the February one, he was positively ordered to make sure to get it. (I know. I suppose I could have bought it myself.)

It was only as I read the article about Helen, and the other author that month, Noëlle Harrison, that I realised it was romance in books for Valentine’s Day. It’s a lovely idea, and it’s sure to have inspired a few people to get hold of their books.

But as the Resident IT Consultant said, did they realise what kind of book Ghost is? When I told Daughter, she laughed out loud. An interest in gothic stories should always be viewed with some suspicion. 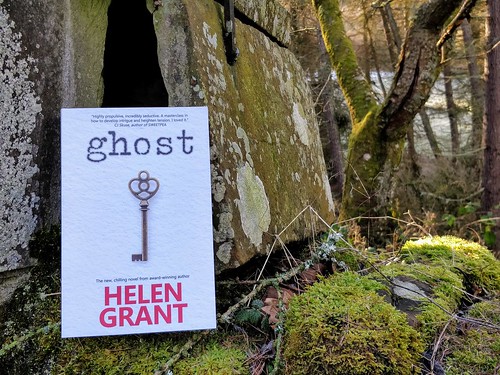 Let’s just say that if I’d not known more and simply read Ghost for the romance, I’d have been in for a shock. Actually, I did know more, and I was still shocked. As were Daughter, and the Resident IT Consultant.

I loved Ghost. I just don’t believe I’d ever suggest it as reading material for Valentine’s. Helen’s fondness for the dramatic Scottish landscape and for atmospheric ruins ought to give the game away.

I wonder if anyone complained? To the Scots Magazine, I mean.