What shall we do without Kerry?

Yesterday the Bookseller delivered the unwelcome news that my favourite publicist is retiring. Yes, Hodder’s publicity director Kerry Hood is hanging up her, well, I don’t know what she’s hanging up. But something. Her not being one of those 27-year-olds, I did realise this time would come, but I pushed the thought away and hoped for the best.

Because that’s what Kerry has given me; the best PR help and some of the bestest authors. (I’m sure the woman cherry-picks…)

We first met eleven years ago, when I forced her to bring me Sara Paretsky. Seriously, I had no idea people were so easy to force. Nor did I know that publicists could speak, I mean type, like normal people, which is why when I got this email I’ve treasured it all these years, ‘Crikey! Yep – that’s you!’ (It refers to an unexpected appearance by me on Sara’s website.)

The next time was in that maze they call Nottingham, and I will link to the whole blog post here, because it shows so clearly how Kerry provided 110% book & author experiences.

More recently I have had thoughts such as, ‘that looks like Peter Robinson over there! I wonder where Kerry is?’ I’ve not had enough time to be a Peter Robinson fan, but his choice of publicist is certainly a recommendation.

Kerry has not only facilitated meetings with authors of interest, but she has gently pushed me in the direction of others that she just knew would be my kind of author. And there have been so many books, usually dispatched with that admirable hands-on technique that I – well – admire. Everyone should be like that.

I have so many great Kerry-related events that I can’t link to them all. Hence Nottingham. I know I’m not alone in this fan behaviour. Just mentioning her name leads to others admitting they love her too.

Daughter and I met Kerry’s dog when we were in London. I had no idea that having your dog in the office could work so well.

I hope there will be another lovely dog for Kerry’s retirement, if that’s what she wants. And maybe the odd appearance at book events? Please? Or just call in for tea.

And then it was the end

I began Saturday with an alarm clock related issue. No, not what you’re thinking. One that immobilised me to such an extent that I had to miss my first Bloody Scotland events, only limping in towards the end of the day to collect my press pass. 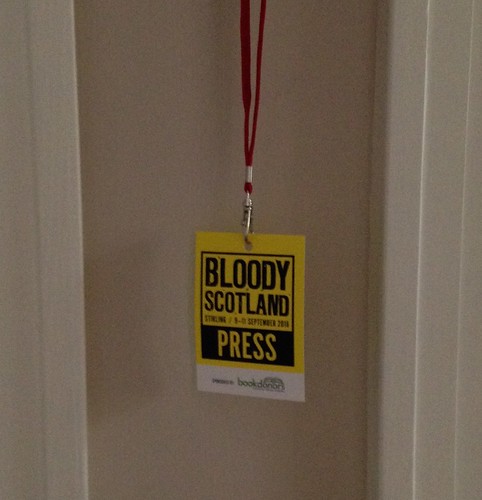 And to hear Erwin James talk to Martina Cole; an event I’d looked forward to considerably.

As I was waiting to get in, I spied one of my favourite publicists, Kerry, and very nearly jumped up (well, not jump, but you know what I mean) to say hello. She was with the equally lovely Peter Robinson. But I decided I needed the armchair I’d found to sit in, and it would undoubtedly be ‘taken from’ me if I got up. So I didn’t.

Instead I was chatted up by the very pleasant woman sitting across from me, so the time wasn’t wasted in any sense. We discussed dyslexia, and she’d been to the event in Edinburgh last month that I never made it to. She had many nice things to say about Barrington Stokes’ Mairi Kidd.

She told me she reads a fair number of YA books and is tired of having to justify this to people. I know the feeling. She asked if I know Nicola Morgan, and I had to admit I do. She likes her. I suggested reading Sally Gardner. And then she asked what I read for pleasure, so I had to point out this is pleasure.

And that my fairy blogmother Meg Rosoff is also my favourite author. She didn’t even ask ‘who?’ but knew, and turned out to be a big fan of How I Live Now, having given countless copies of the book to people to read. I know the feeling.

At that point it was time to go in for Erwin James, so I said goodbye.

Within minutes it was more goodbye than that, as I was bluntly informed that the press pass that would give access to anything, was no good for sold out events such as this. (I had wondered, but on asking, was reassured that it would get me anywhere.) Probably didn’t help that they changed the venue around, meaning this was in the smaller room, making sold out happen much sooner.

So, well, I limped home again.

At least the weather was nice.

And today I have the day off, as no way am I limping anywhere else on the off-chance that Sunday’s events have seats left.