And then it was Sunday

Rubbing shoulders with all these crime writers has made me see the potential for murder everywhere. For instance, the fresh blood spatters in the ladies toilet? The possibilities are endless. The man with the shoulderbag strap? I saw him twice. Just because you see someone a lot, doesn’t mean you know them and that they are safe. (You from them, or they from you…) 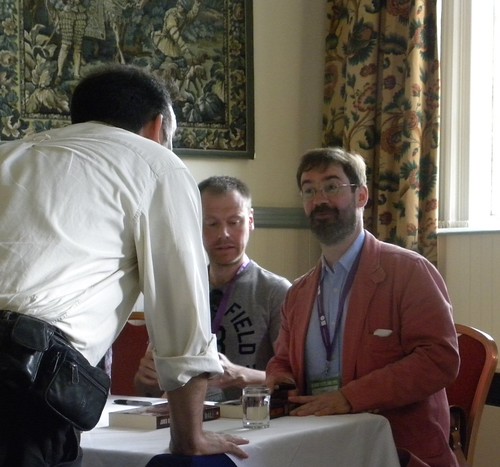 I went to see three more noir boys before lunch. This time they were Edinburgh Noir. They may have been sold out. James Oswald reckoned ‘that was fun’ when I caught up with him in the corridor after the event.

You may remember I had running to do. So after I’d made sure the three noirs sat down to sign at the table laid for three, rather than four, it was all downhill for me again. But at least it was dry. 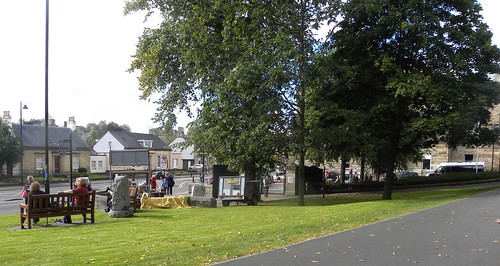 It was so dry I was able to sit in the small park area in front of the Albert Halls to have my lunch. I even had a wasp trying to enter my sandwich bag. It made me realise two things; that we’ve not seen many wasps at all this cold summer, and that here is where I always attract wasps. Between one Bloody September and the next, I forget. I watched two men wielding a mallet and a saw (because that’s not dangerous at all). From their sign it seems they build cabinets. Don’t know why they did it in the park, though. 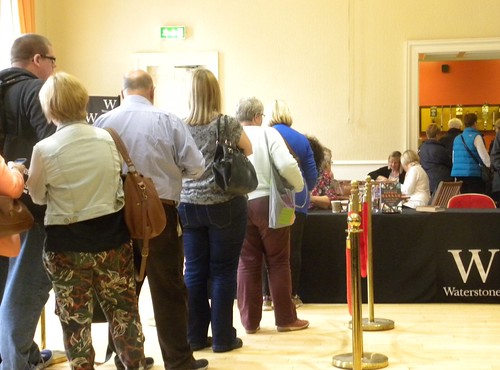 Missed Lin Anderson’s signing due to my outdoor picnic. And then I went in for my two Albert Halls events, not meeting a single unexpected person and having a generally uneventful afternoon. If I could have Sophie Hannah’s trousers I’d be happy, but I daresay she needs them herself. 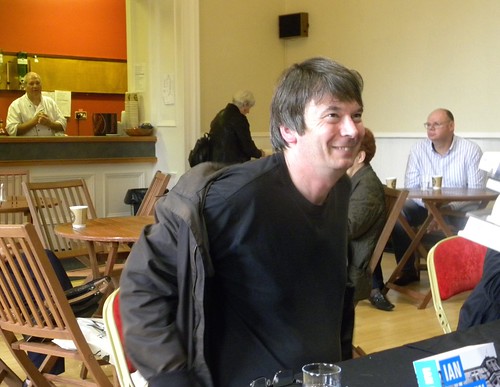 If Ian Rankin looks happy it’s because he and his fellow Scots in the Scottish football team drew with England. Naturally this was when it rained. 5-5, which apparently means the local team keeps the cup because they won last year…

It wasn’t so dry that it didn’t rain at all, but it mostly did this while I was indoors and the rain was not. On my way home I could have made it all the way in the dry, had I not stopped to help a lady in a car find her way to the street next to Bookwitch Towers. It struck me I could have offered to show her the way if she gave me a lift, but it also struck me that we’d both be safer not sharing a car with a stranger, however nice we both seemed.

That’s murder for you.

There was never any time to read the crime proof by Philip Kerr, several years ago. It looked good, though. And the book survived my culls, simply because I really wanted to read it. And I didn’t know about Philip’s children’s books. Then I was surprised to find him described as a Scottish crime writer, because I didn’t know that either. Seems he was born in Edinburgh, but doesn’t live in Scotland. Though I could be wrong on that. 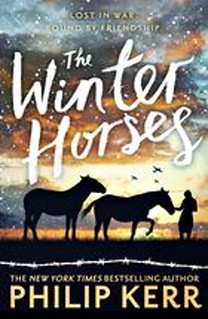 But I’m not wrong about how great a book The Winter Horses is. Set in the Ukraine during WWII it makes for grim reading, but is also enormously uplifting. It’s mostly about Przewalski’s, which are very unusual horses, and during the war they were facing extinction because they weren’t pure enough for Hitler.

The ones in this book are almost human (which is more than you can say about the men who killed most of them), and although wild, can adapt to circumstances. 14-year-old Kalinka has seen all her family killed by the Germans, and most of her home city too. She won’t accept that the Germans will get these last horses as well.

With the help of an old man, this starving girl manages to get a pair of horses away, and manages not to freeze to death on the winter steppe.

This is a children’s book, so I think I’m allowed to say that much. You know there has to be something positive at the end. But I won’t tell you what or how. Only that I had been correct in feeling I’d like Philip’s writing.

The Bloody Scotland programme, and other fun stuff

They had to launch the Bloody Scotland programme without me, but it’s actually quite a good one despite this.

Before the Bloody Scotland weekend even begins you can go to writing classes – if you are young enough – or you could take part in their short story competition. And then, on September 11th (hm, that’s an ominous date…) the Stirling goings-on start.

There are many of the regular Scottish authors we have come to expect, from Lin Anderson to Val McDermid, Ian Rankin and Philip Kerr. Sophie Hannah is returning to talk about what looks like an even scarier book than usual. We have Nordic Noir, and Arne Dahl is coming. Edinburgh also offers some noir, and Alexandra Sokoloff knows about self-publishing. Brighton Rocks, and there’s the poisons of Agatha Christie, and Pitch Perfect (which might not be about a capella singing).

And when all the fun in Stirling is over, you could hop on a chartered plane to Shetland to discover the settings Ann Cleeves has used in her crime novels, and you can do it in her company. There will be film locations, too, and you can ask Ann questions. That’s not a bad deal at all.

(I’m going to have to sit down and do some realistic calculations on how much fun I will be able to tolerate.)