After my earlier moan about there not being any events to attend, I did manage one yesterday. Not physically, obviously, nor ‘manage’ if by that you mean I could suddenly cope with IT issues. But after five or ten minutes of abject failing to connect to SELTA’s The Path Less Trodden: Different Routes into Translating Swedish Literature, Son sent me a clickable link, and there I was. So to speak.

As were they: Deborah Bragan-Turner, Rachel Willson-Broyles and Paul Norlen, chaired by Alice Olsson and ‘teched’ by Ian Giles. They were all lonely, and welcomed being able to talk to the world about their work. Admittedly, when it came to questions, Ian inadvertently dragged one questioner from the kitchen where he was doing goodness knows what.

One very important question was whether they had to have such impressive bookcases as their backgrounds. Or if they were even real. All five who appeared on our screens were backed up by books. Probably an unfortunate coincidence… Some tried to claim they had to be real because they were so untidy (but then I don’t believe they have ever seen untidy).

Translating is a fun job. All right, so sometimes an author might reckon they know best and have opinions on the English these people are paid to translate their books into, but it’s rare.

How they started was quite similar. Some early experience, maybe at university level, enthused them so much about Sweden and Swedish that they just had to learn more, which they did by spending time in Sweden, discovering how we live (I still don’t know) and having fun, and withstanding suggestions like why bother with a boring language like Swedish. Why not Persian or Sanskrit?

These days you learn a lot by attending the Gothenburg Book Fair, where you can speed date agents and make contact with useful people. There can be financial help with attending, too, from Kulturrådet. Good stuff.

Agents are the most useful. Not so much publishers. You might contact an agent, or more likely, they will find you. Sometimes an author finds you. There can be short – and fun – sample translations, and there can be full novels translated on spec.

Questions to authors are varied. ‘Lagom’ – not too many nor too few – is best. That way the author knows the translator cares, but is neither too unconcerned or too fussy.

Literary translations seem to be the norm with these translators, but they do get other work as well. It can be restful working on something different. But basically, this is a fun job. Maybe not so much the editing, but that is fun too…

You can listen to it here.

October is the Coldest Month

This Nordic Noir crime novel could almost be for your ordinary adult crime fan, were it not so short. But it is actually a YA noir, written by Swede Christoffer Carlsson. This is his first YA book, but he’s an award winning author of several adult crime novels. I was attracted to his lovely surname, and the fact that he hails from a place I know well.

I don’t think the story is set there, though, but it’s still easy enough to visualise those dark and intimidating woods. I don’t like woods. 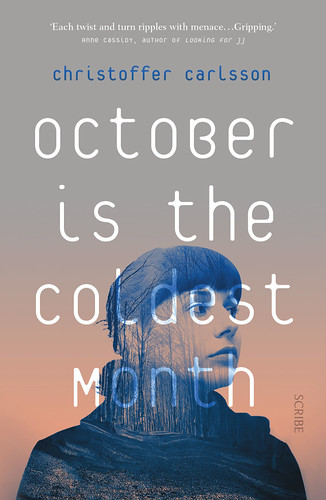 To my mind this is quite a daring story for translation into English. I’m sure the Swedish teenager reading it won’t turn a hair over the sex, but I can see that UK gatekeepers might have something to say about it. Hopefully October is the Coldest Month will make it into the hands of new readers without interference.

Set in Småland, and I imagine far from the nearest IKEA, we meet 16-year-old Vega who lives in a small community in the woods with her mother and older brother. And now her brother has disappeared and the police are looking for him.

Vega knows more than she will admit, and she sets out to find Jakob, and also to discover what’s behind his reason for hiding, and how it will affect her, and for that matter, the lives of everyone else out there.