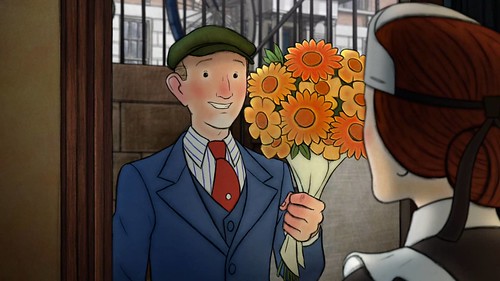 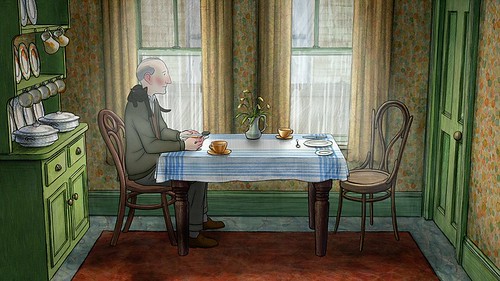 It’s enough to break your heart. You know that might very well be you one day – unless it already is – and that day is getting closer every minute.

I read the Guardian interview with Raymond Briggs at the weekend, and it was refreshing to discover what someone like him is like. I suppose we ‘knew’ it already, through The Snowman and Father Christmas, but meeting his parents and the young Raymond is far more illuminating.

The book is tremendously powerful. I’m trying to work out if the film is more so, and I am reluctantly coming to the conclusion that I prefer the book. Somehow they became overly loud in my mind, when I could hear them speak.

But it is still a marvellous film, and it does a great job of showing us the middle half of the last century. It’s not everyone’s 20th century, but I guess many people will recognise their lives, or the lives of a generation before them. We were discussing whether people like Ernest and Ethel could really have done so well materially, but I reckon you could, if you had a steady job and lived carefully. Once you had your cooker or your sofa you had it. No need for new ones all the time. And by the time they bought the car, the mortgage will have been paid.

It would have been easy to see this as proof of how much better we have it now, except I believe it proves we’re heading in the complete wrong direction.

The Grandmother pushed Raymond Briggs’s Ethel & Ernest at me some time last year. Being a contemporary of his, I’m guessing the book about Raymond’s parents carried even more meaning to her than it did to me. I’d already read it (in fact, I own a copy, but it took me forever to find it again) and loved it and cried over it.

It’s a little like The Snowman or Father Christmas, but because it’s real, it’s darker, but also more interesting. Re-reading Ethel & Ernest I was surprised to find it was less sweet and lovely than I remembered. Perhaps my long ago read turned into the same kind of nostalgic trip we tend to reserve for our own pasts.

And despite being by Raymond Briggs and in the form of a comic, it isn’t a children’s book. Although if used for learning 20th century British history, it’d do a better job than most school books (not that schools have actual books) would.

It spans just over 40 years, from 1928 when Ethel met Ernest, and ending with their deaths in 1971. In 1928 Ethel was working as a lady’s maid and Ernest was a milkman. I’d remembered them as both being labour oriented, but it was only Ernest, and he irritated his wife, who aspired to ‘better’ things.

Maybe they achieved better things in the end. I hope so, but it seemed like Ethel was always hankering for the past. A time when you didn’t need electricity, and your son wouldn’t have dreamed of being a hippy in public.

Their one and only son, very much longed for, and born when Ethel was almost 40, and destined to be the only child after a difficult labour. Having to send her darling five-year-old away when WWII began, virtually making her childless again. Her pride in Raymond when he was clever enough to go to Grammar School, and his parents’ shock when he opted to go to Art College.

This is a book that is more relevant today, when we can no longer take for granted that time means progress. Ethel & Ernest eventually owned not only a fridge, but a car as well. Ethel might not have appreciated it fully, but they did move up in the world.

I wish many more of us could draw, and remember, to tell our parents’ story. It might be possible to do it with photos, if enough of us are able to recall what happened and what people talked about.

He ‘can revert at any point’

They are all quite lovely and tremendously interesting, but aren’t they a little weird,* too? I don’t want to be indiscreet, but among Sunday’s crop of authors we found a murder suspect, someone with plans to celebrate a well known politician’s death, a sofa arsonist, a perennial teenager and a writer reluctant to do research in the south of France in winter.

Sunday was literally bursting with great writers for children, and I very nobly only went to see half of what I wanted in order to preserve what little sanity I still have.

We began our day out with a lunch to keep us going until late, and found we could access the wifi and this enabled some ‘office work’ before we walked on to Charlotte Square, which, as I said, was teeming with the great and the good. I so wanted to stop and chat to Philip Reeve as he strolled by, but had neither the time nor the courage. Chris Bradford walked round dressed in black robes, trying to entice people to come and see him.

Having failed to keep track of Barry Hutchison through useless email all day, we suddenly found the man himself, recently arrived from the Highlands, en route for a night on the town with ‘the boys.’ My photographer found Sarra Manning and Sophia Bennett signing in the bookshop, and also ran into Keren David who was out enjoying events before her own talk.

One event not to be missed was Theresa Breslin and Elizabeth Laird talking about writing historical novels. They both read from their latest novels, and described how they do research. Theresa had had some luck with a book belonging to Mary, Queen of Scots, which she wasn’t allowed to even see, until she came across it almost by accident.

Elizabeth admitted to an unhealthy obsession with Ethiopia. (It’s OK. We all have something to hide.) Liz told us about how breeds of dogs were totally different in medieval times. Theresa mentioned embroidered, encoded spy messages, and both thought that the middle of the book was the worst part to write.

That’s something the next pair of ladies agreed with. Keren David and Cat Clarke discussed their contemporary teen novels, and read from their books. Keren chose to read from Lia’s Guide to Winning the Lottery, and we now know more about exploding breast implants than some of us might have wanted. Cat read from Torn, which she did so well that Daughter immediately wanted to read it.

Both Cat and Keren spend too much time on social media, and reckon chocolate can cure writer’s block. You need to kill parents or divorce them, because how else could you have your characters staying out all night? For the same reason you have an abnormal number of only children in fiction. Siblings get in the way.

Cat once wrote a book that scared her so much she had to give up after twenty thousand words, and Keren is very excited that Lia’s Guide is about to be made into a musical.

We had a full programme, so had to dash after Cat’s and Keren’s signing to set up an interview corner at the opposite side of the square. Daughter had persuaded Professor Frank Close to give her an interview, on the eve of his talk about the Higgs Boson. I’m not sure I understood all they talked about, but they do seem to have found something to laugh about. Apologies to the lady who wanted our help. We weren’t really the best people to ask right then.

The evening finished with a Masterclass with Chris Riddell, introduced by Sue MacGregor. It was very dark. Almost too dark to take notes, but I am fairly sure I wrote something about Blair as Bambi. And Clinton, and Cameron, and all the others. Amusing though cartoons are, they are unlikely to change anything, and Chris feels he is politer in colour. (Bring back black and white?)

Chris’s tutor at Brighton Polytechnic was Raymond Briggs, and that’s why he started working on children’s books. When the Economist asked him to do political cartoons on the basis of a children’s book about elephants, Chris enjoyed being allowed to draw lederhosen, onions and bulldogs (I think those signify the Germans, the French and the British…).

The darkness was to allow us to see the slideshow of holiday snaps, no, I mean cartoons, which Chris had put together with help from his clever son. Though I don’t think that’s what he (or was it Sue?) meant when saying we were there to laugh when we think of dark things. It was dark. I’m not sure any longer. Chris gets invited to all the best parties, and he does get edited, but only by being told he can’t do something. He won’t allow interference within a cartoon.

At the subsequent signing in the adult bookshop (it was late) Chris met the best kind of fan; someone who turns up with a pile of old and well worn picture books. I wished I’d had some to get signed myself.

*(And speaking of weird, what are those cut-off rabbit’s heads doing on the ends of rows of seats in the Corner theatre? Other than preventing accidents on sharp corners?)

(The title refers to Chris Riddell, who wasn’t sure he wouldn’t revert to being a children’s author, bursting into some unsuitable song.)