At first I thought I wouldn’t read Dreamland. It doesn’t look like my kind of book. But I did my usual and read the first few pages, and I found such a likeable ‘supporting character’ in Gollum, that I knew I had to read it. That turned out to be a good decision.

The main character in Robert L Anderson’s first novel is Dea, who is 17 and lives with her mother outside a very small town in, I think, Illinois. She’s always been different and an outsider, and Gollum is her first almost friend. Gollum is even less popular at school than Dea. 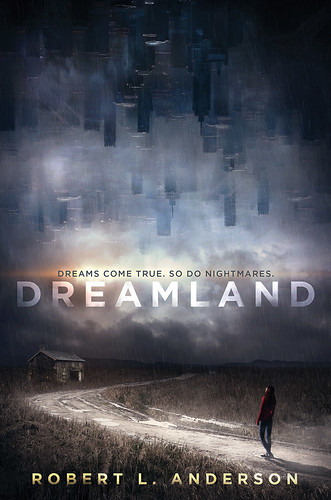 Dea ‘walks’ other people’s dreams, i.e. she holds something belonging to another person and that way she can enter their dreams. Her mother is the same, and both of them do it because otherwise they become weak and fall ill. There are rules. You mustn’t be seen and you can’t interfere in the dream. And never enter the dreams of the same person twice.

When the gorgeous and friendly Connor moves in across the road, Dea has a friend, and a sort of boyfriend, and she decides to ignore the rules. Connor has a troubled past, and she wants to help him.

This is much more fascinating than it might sound, and I was hooked from the word go. You just have to find out what will happen, and why things are as they seem to be. It is very small town America, and Robert blends complete normality with fantasy in such a way that you simply believe.

As I said, you have to love Gollum, and Connor is an unusual teenage boy/romantic interest for this kind of novel, and it all feels very fresh. You find humour and friendship and courage and determination.

And there could be a sequel. If one is planned I don’t know.