Monday, Mounties, Metaphrog and the Makar

On my walk from Haymarket to Charlotte Square on Monday I was overtaken by a Mountie. This doesn’t happen often, and as this one was a fake, it might not even count. But still. That’s Edinburgh in August. Thank you kindly.

Just before the entrance to the book festival, I came across our new Makar, Jackie Kay, being photographed by a fan. On my way to a reception in the Party Pavilion, I first stopped by the signing tent to see who I could find. I had missed Philippa Gregory, but caught Dominic Hinde with his last fan. He’s written a book about Sweden, which I’ve not read, but is why I sort of knew he’d be there. 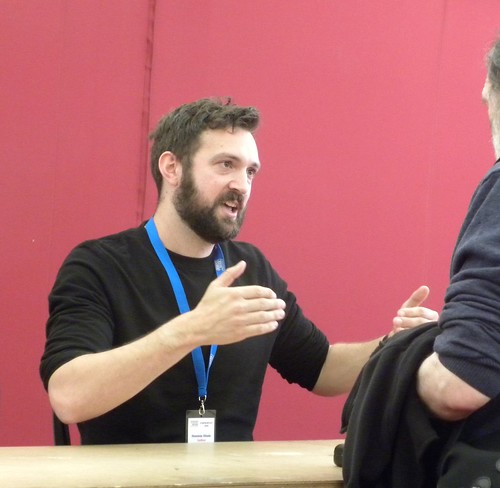 Got to the party just as it was beginning, finding Debi Gliori in the queue by the door and had the nerve to ask her why she’d been invited… (For a good reason, I may add.) She was debating the impossibilty of removing more garments in the somewhat unexpected heat. It’s hard when you are down to your last cover. 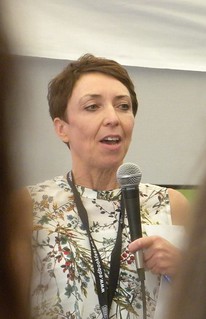 We were there to eat scones and dainty sandwiches, and to hear about the book festival’s new-ish venture outside Charlotte Square and August, Book-ed. Janet Smyth introduced the speakers, who told us what had been happening, or was about to happen, in their home areas, primarily half a dozen new towns, including Irvine, Glenrothes and Cumbernauld. It seems that having the EIBF behind you means any venture stands a much better chance of success, so I believe we can look forward to many more little festivals here and there.

A wealthy Bookwitch would have offered to sponsor something on the spot, but in this case she merely had another piece of rather nice cake. Met a crime colleague, who was able to tell me what I did last August, which is something I increasingly need help with. To make the most of my invited status, I sat outside on the decking for a while, enjoying the sunshine. 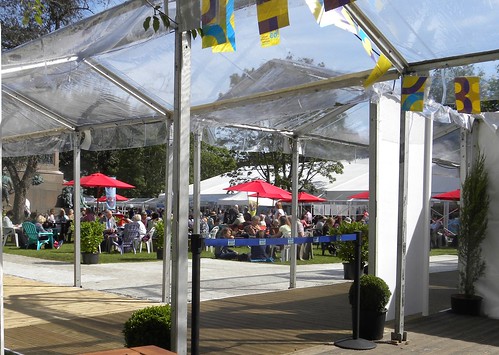 It was going to be an afternoon of bookshop signing photos, and I hurried over to catch Nicola Davies and Petr Horáček (for a while I lost Petr’s lovely accents, which was worrying, but they have now been found again), who had so many young fans I didn’t stop to talk. 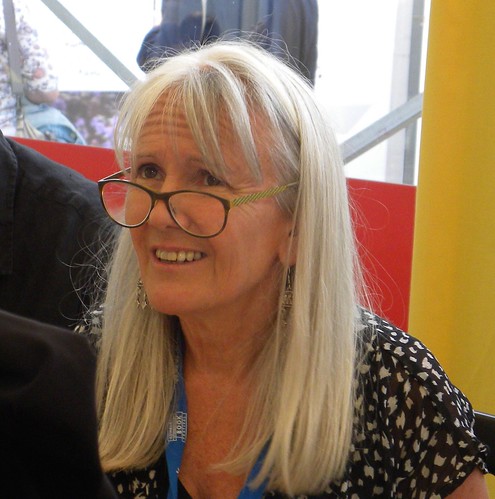 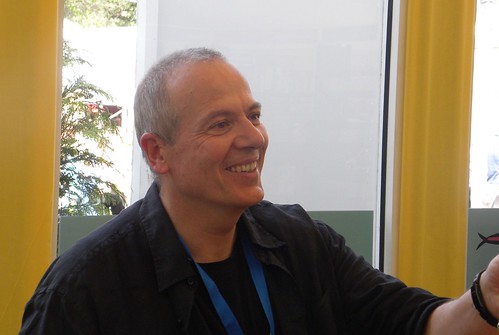 The really great thing about Charlotte Square is that someone built it near a good shoeshop, making it possible to pop out for new shoes whenever a gap presents itself. I found such a gap on Monday. 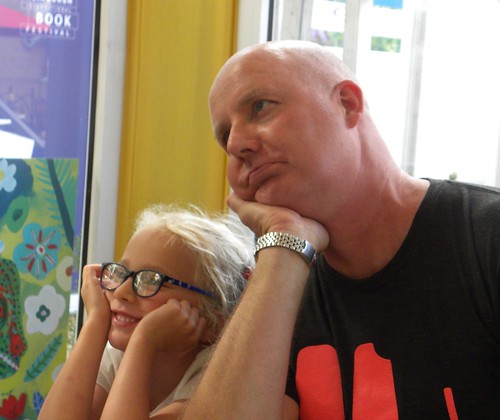 Back for Richard Byrne, who seems to be a very nice man, with a whole lot of lovely little fans. And then I crossed the square for Jackie Kay and Zaffar Kunial, checked out the sandwich situation, and went and had a chat with Sarah from Walker Books. 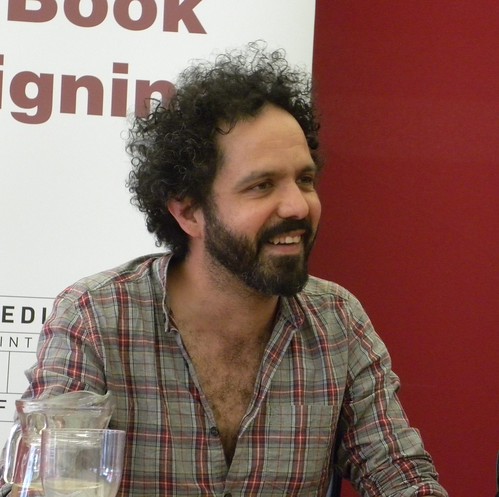 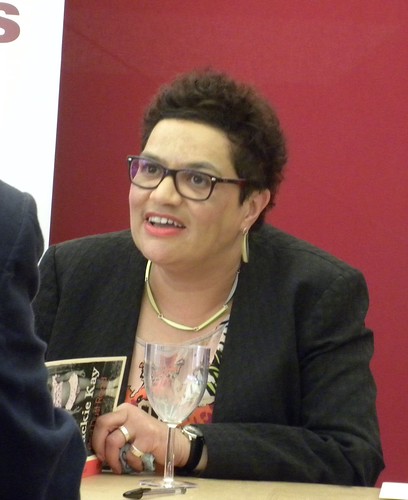 Refreshed from my brief rest, I braved the world of Harry Potter. Jim Kay, who is illustrating the books about the famous wizard, had a sold out event, which then filled the children’s bookshop. Although I couldn’t help noticing that those first in line were really quite old. I chatted to Jim’s chair, Daniel Hahn, who is so relaxed about travelling that he’d only just got off the train. 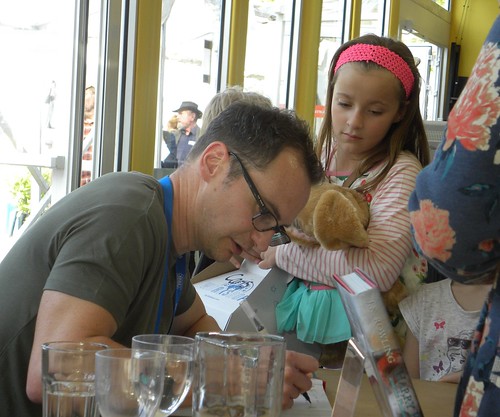 After a little sit-down in the reading corner I was ready for Ross MacKenzie and Robin Jarvis. The latter had brought a skull. And with all three signings happening side by side, there was quite a crush. On the left side of the queue I encountered Ann Landmann, who told me she was feeling stupid. When she’d told me why, I also felt stupid, so it must have been an Ann thing. (We should have brought our copies of A Monster Calls. And we didn’t.) 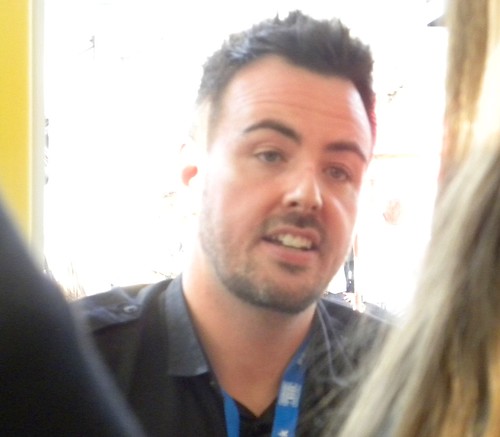 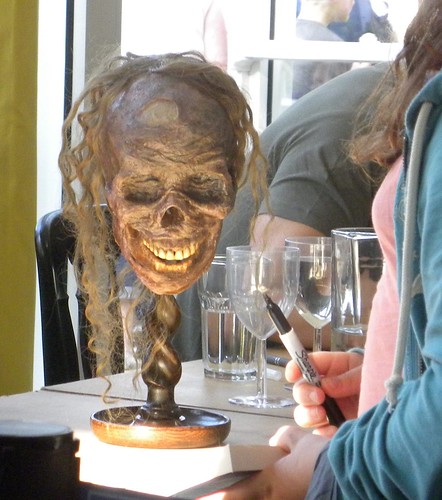 My sandwich required eating, and I repaired to the yurt, before going zombie-hunting. Darren Shan was signing his Zom-B Goddess (and I can’t tell you how relieved I am I haven’t really started on his – undoubtedly excellent – books). His hair was extremely neatly combed. I liked the way Darren allowed time for chatting with his fans, initiating a discussion if they seemed shy. I can’t see how he’d have time to do it with all of them, but maybe he feels that those who’d waited to be first in line deserved a bit of extra attention. 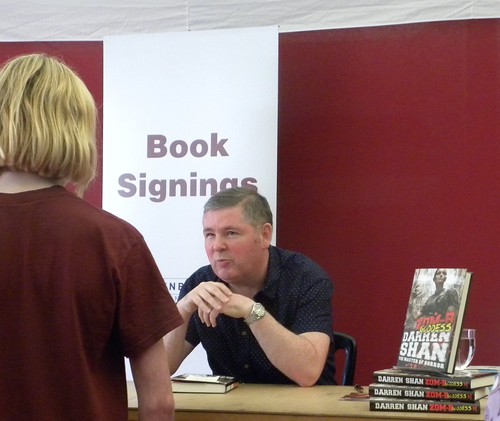 Over in the children’s bookshop I found Metaphrog still signing, and was pleased to see they look nice and normal. The name has always worried me a little… 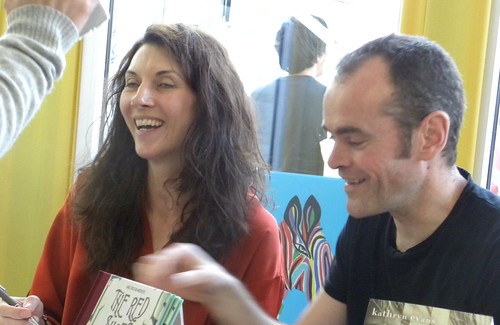 And then all I had left to do was get ready for Jo Cotterill and Kathryn Evans, which you’ve already read about. Listening to others in the queue, I got the impression, as with Michael Grant on Saturday, that many people buy tickets on the day for an event that sounds reasonably suitable, but might be with an author they’d not heard of before. I like that. It’s good to know you can discover a new favourite out of the blue.