Fathers and their children

Ah, fathers! You’ve got to love them, don’t you? They’re so wise and gentle and handsome.

In Dragons – Father and Son, by Alexandre Lacroix, with beautifully fierce dragon drawings by Ronan Badel, and translated by Vanessa Miéville, we meet young Drake and his father, at home in their cave. 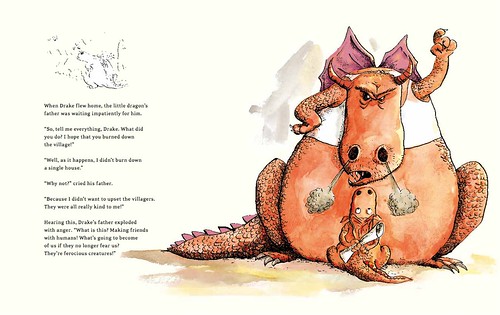 The time has come for Drake to go out and burn down a few houses where the humans live. It’s tradition. Drake’s not keen, but he goes. But of course he doesn’t burn anything down; the humans are too canny. I mean, they are so kind that he just can’t.

He learns a few things from the humans he encounters, though. Enough to placate his father when he gets home. It’s better to be admired for your good looks than how much you scare people. I’d like to think that in future Drake can continue just breathing fire on his intended meals (which seems awfully handy, as skills go).

In Me and My Dad by Robin Shaw, we find a little girl going out for a walk past the local shops with her Dad. She likes everything about their walks, but the best always comes last.

They see dinosaurs and crocodiles (this is a typical British town) and all kinds of magic creatures. But the best bit is at the end.

And when you get to the end you realise why the little girl can see all these fantastic things en route. It’s because of what’s at the end. It’s teaching her to use her imagination. 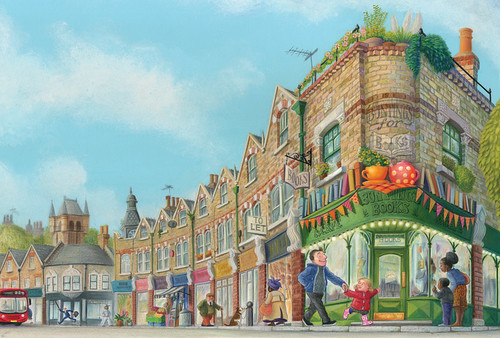 It’s a bookshop, with a café. She and her Dad choose a book, and sit down with a hot chocolate and read.

They might even read about dragons. Humans like them. And if not, there’s always hot chocolate. Potentially another crocodile in the puddle on the way home.