It’s not only sourdough bread that has happened over the last three months. Many authors have come up with online material to offer readers. In fact, there’s been such a glut that I’ve not been able to keep up. I just know there is much to find.

Small Scottish publisher Cranachan Publishing has a free ebook offering a wide variety of things to read. Their ‘Stay at Home! Poems and Prose for Children in Lockdown is a a free, illustrated anthology of poems and stories for children aged 8-12, comprising specially written lockdown-themed contributions by 40 writers based in Scotland.’

Try it! There are household names, and there are names you might not have heard of. Yet. But this is a nice collection, and what’s almost nicer still, is how people have pulled together to make it happen.

It was time for another instalment of Kirkland Ciccone’s vendetta against the Edinburgh Book Festival yesterday. 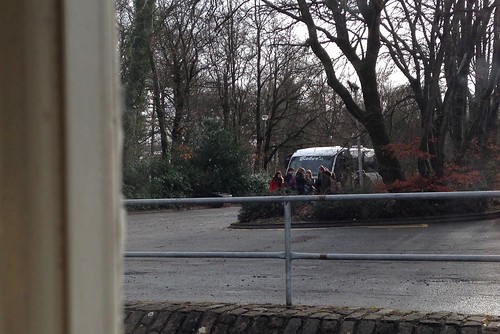 Only joking. (But if you at first don’t get invited, start your own book festival.) This was the last time at the old Cumbernauld theatre, with great plans for what it’ll be like in the new one. Bistro. With chips. Or so I gather.

After introducing all his authors, Alex Nye, L J MacWhirter, Moira McPartlin, Philip Caveney/Danny Weston, Paul Murdoch and Ross Sayers, Kirkie sent the others off to their respective bars and dressing rooms, while he and Alex stayed in the main theatre for their longer performances. 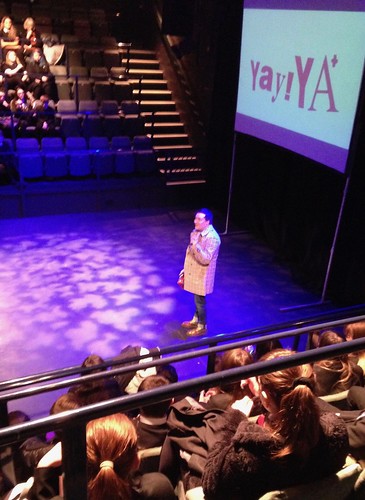 Considering that many of the school children who came, are less used to reading and book festivals, it was good to hear Kirkie talk about his own humble background. We got the lot; the exploding council house, his mother’s ‘apple juice’ and his older brother, Scotland’s worst armed robber. Yes, he mentioned the lamp post incident, Kev. And going to collect the benefits Kirkie discovered the library in Cumbernauld and it changed his life, starting with Meg&Mog.

The only reason Roald Dahl didn’t adopt him, despite his repeated entreaties, was that Dahl was already dead. After Dahl and Matilda we quickly covered Nancy Drew, Sweet Valley High, Point Horror, Jane Austen, Agatha Christie, Robert Cormier, Harry Potter and Twilight and Stephen King. All these were somehow responsible for Kirkland’s own books that have since been released into the wild.

Alex Nye’s turn next, where she took us back to the morning of the roof of Cumbernauld Castle falling down and how Mary Queen of Scots helped tidy up afterwards. Then we were in the snow on Sheriffmuir, in the ghostly tales of Chill and Shiver, before moving on to Glen Coe and Darker Ends. 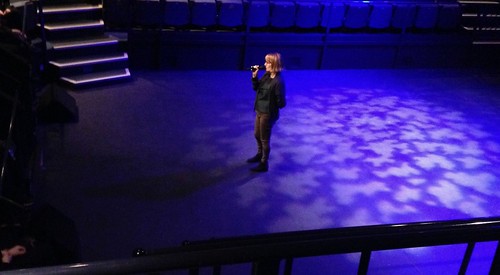 She bemoaned the fact that not enough Scottish history is taught in Scottish schools, and that it’s more British history. Mentioning the new film about Mary she said it was good, but featured a fake meeting between Mary and Elizabeth I and some laundry. This year Alex has two new books out, one about Mary Shelley and another about children from Syria.

When Kirkie turned up again to tell me that lunch was ready, I ordered him to assist Alex in coming to an end, so that the entire lunch break wasn’t taken up with questions from the audience. 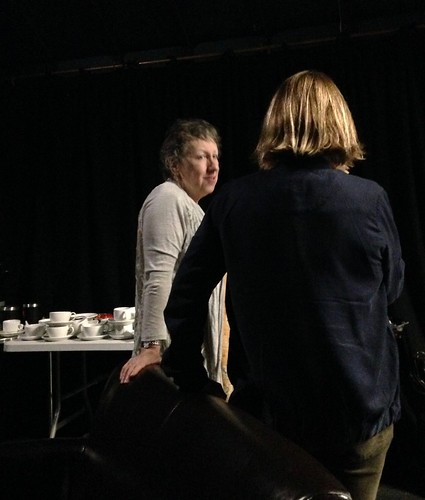 Over lunch I was struck by the fact that out of the eight of us sitting round the table, three had a past in Stockport. Bit of a coincidence. Four if Danny Weston counts as a person… We ate fruit, and discussed the latest phenomenon of how to eat a pineapple. And when the children came with books to sign, the authors were surprisingly badly equipped with pens! 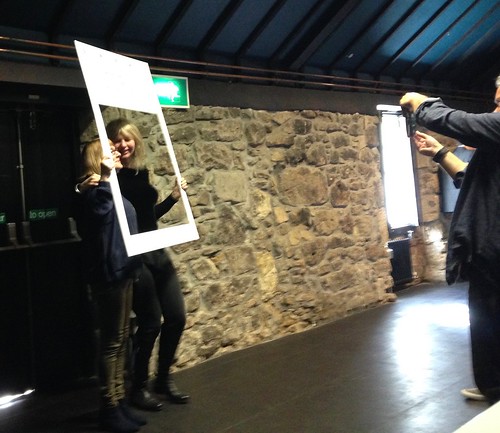 Photos and selfies were taken and books got bought, before everyone was herded back to their bars and dressing rooms for the afternoon. Having sworn never to return to the nether regions of the theatre, I’m afraid I missed Paul Murdoch and Ross Sayers, which was a double shame as they were the ones new to me. 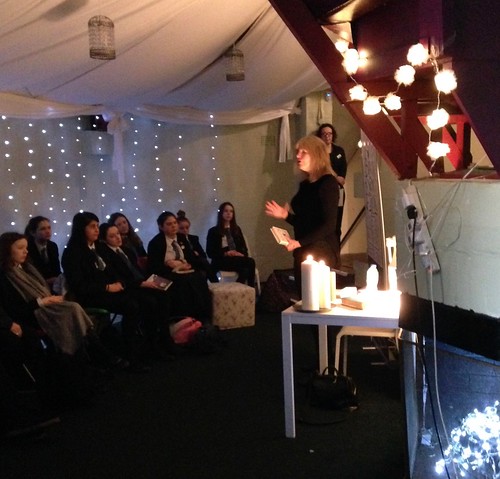 I began in the bar where L J MacWhirter had music and candles and string lights to help her talk about her book featuring dreams back in the 1500s. She talked about the characters in the novel that took her 15 years to write. L J read to us, until the bell went and it was time to up and change to another author in another bar.

I went to hear Moira in ‘the Fireplace’ where she had bluetacked photos of her inspirations for her characters; Nicole Kidman and Sheila Hancock among them. Moira had purple badges with Celtic knots to hand out, and she told us how she got started writing, being bored when travelling on business. Then she was a runner up in a story competition, where Gillian Philip was a judge, and she told her this was material for a full novel. So she wrote a book. 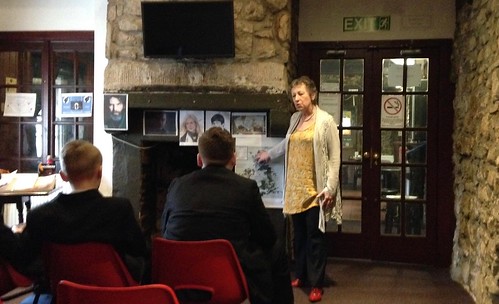 Moira read a piece from the first book in her trilogy, and it sounded pretty good, I have to say. With time for just one question, it was lucky it was an excellent one, about technology in her future. Good children, who paid attention.

Moving to the next bar where Philip/Danny was, I stayed for two talks, seeing as he alternated between his two personalities, and I didn’t want to miss one of them. Danny was born out of necessity, when Philip wanted to go darker in his writing, and the publisher wished to avoid upsetting his fans. And is there anything scarier than a ventriloquist’s dummy? Hence Mr Sparks, which he read in a variety of accents. 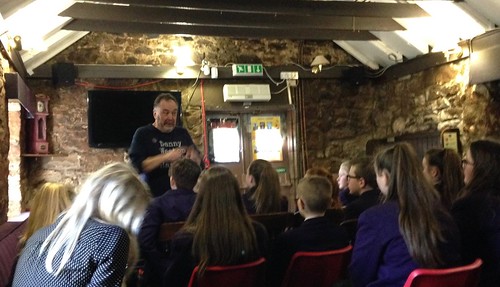 By the time Danny became Philip again, he complained his voice was going, but ‘I don’t know where.’ He read from The Slithers, and it was no less disgusting than when I read the book. He reckons that writing fiction is ‘one time in your life you have autonomy.’ There were good questions, and Philip also had a great technique for dealing with the not so good ones, not to mention a way to force unwilling children to come up with questions. This was clearly not his first time out. 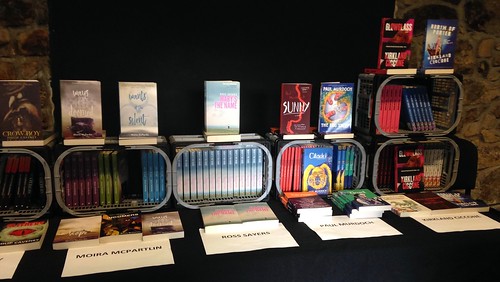 At this point I discovered the bookshop was closed, which was a slight disappointment. I went back into the main theatre and listened to the end of Alex’s talk again, before all the authors congregated down ‘in the pit’ to answer the odd question – very odd, in fact – from Kirkie and the children. Someone wanted to know why they were all so ‘dark.’ It seems it’s what makes writing interesting, so I suspect the time for happily ever after is long gone. 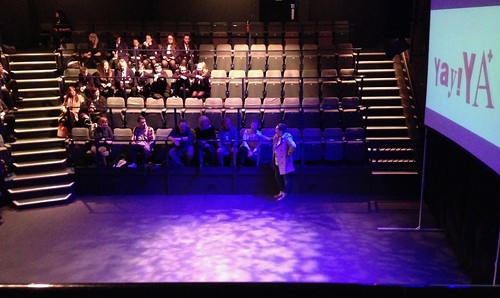 The seven/eight signed books and exercise books and bits of paper, and were photographed with ever bolder fans. I saw at least one boy clutching three books, and it gladdened my heart. I will now imagine him sitting at home reading. 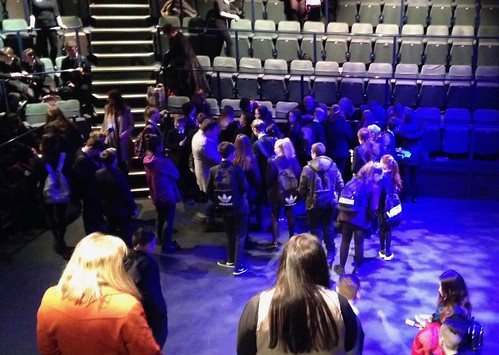 Carrot topping was discussed at least twice, and I for one am glad Alex still has all her fingers. And then L J went and mentioned Macbeth. In a theatre.

To be on the safe side, Moira drove L J and Philip/Danny to their train and then she gave me a lift home. Let’s hope for the best.