I was going to dip in and out. Not miss Barry Hutchison. Nor Catriona McPherson. But in the end, there I was, taking in every minute of the four hours of crime writers coming and going. Possibly attending less diligently when slurping the soup Daughter so kindly carried to my desk, but continuing all the same.

So one advantage of Bloody Scotland going online was that you can have a couple of dozen authors from anywhere in the world pop into your Sunday panel to chat to their friends for a bit, before going off, leaving their chair to someone else.

To start, Lin Anderson looked after the first hour, discussing pets with Stuart MacBride, moving on to stovies (apparently everyone in Scotland knows what they are, but I am only hazy about them, except that I don’t want any on my plate) and from there seamlessly to vodka, with the help of Hania Allen, and how one can speak fluent Polish after drinking some.

Then, James Oswald with the hair. It was long, but mostly because he is antisocial, and not so much lockdown. The question there was how to tell his calves apart. (Coos, not lower legs.) Easy with Daphne, otherwise hairy ears make for problems. Andrew James Greig, former Bloody Scotland crew, added rotary dryers, and I’m not sure if you can kill with those or not. He didn’t recognise Hugh McIlvanney when they met – ‘which one of you is …?’ It’s not what you say to big names.

James – with the coos – spoke about the Bloody Scotland family. He was joined by Neil Broadfoot, who murders in Stirling, and who almost left when Lin handed over to Morgan Cry, aka Gordon Brown, non-PM. Some people plot, others don’t. Let’s leave it at that. But it can be so boring knowing what is about to happen that the writer might not want to go on.

The incoming authors kept coming, ringing the doorbell and being visible on screen to the world. Just not to the hosts. Might need to work on that. Sara Sheridan spoke of 1950s fashions, and appearing inappropriately dressed on her husband’s Zoom meetings, because it’s how she writes books.

Finally it was time for Barry, who was addressed as Barry despite being there as JD Kirk. I think he wins the book count. 140, of which most are children’s books, but the adult crime has grown by around 40 books in four years. He explained his quantity over quality theory, and spending 06.30 to 11.30 writing, before doing admin and then playing with the children.

His school librarian had lured him into the library with piles of The Beano until he entered voluntarily, with offers like ‘come with me to the monster section’. When the library failed to have ninja books, he was told to write one himself, which he did, aged nine, and it was duly entered into the library catalogue.

Mary Paulson-Ellis, who likes paperwork, and is a top LGBTQ writer according to Val McDermid, was next, along with Caro Ramsay who knows everyone hates her, but ‘that’s fine’. SJI [Susi] Holliday was accused of having jinxed Covid into being. (This was the soup episode, so I didn’t note everything down.)

Doug Johnstone was back, even after all that singing on Saturday, and the host changed into Craig Robertson. He had done no prep so told the group to talk as much as possible. Both parts of Ambrose Parry were present, and we learned that Chris Brookmyre is now letting wife Marisa ‘do a bit more’ in their shared writing. She sounded so useful that Susi said she wanted a Marisa as well.

Where Doug goes for walks to get ideas, Susi gets them in the car, where she can’t jot them down. Ambrose Parry enjoyed getting ideas after Covid-walks on the local golf course. Caro’s dog knows more than she does. They all said to trust your instincts.

Jackie Baldwin might have upped the body count in Portobello, having moved crime from Dumfries, and Susi pedestrianised somewhere that badly needed it. Chloroform belongs in Edinburgh, just so you know. Radio’s Theresa Talbot arrived with wine glass in hand and explained that with no traffic to talk about on the radio, she was now a garden expert.

Jackie is used to being in prison, due to being a criminal lawyer (which I hope is more innocent than it sounds). Theresa is a Glaswegian by heart, and when she sent her detective to Loch Lomond to please the fans, she couldn’t think of anything for her to do, so she returned to the city again.

Alan Parks sticks to the 1970s, which neatly avoids mobile phones and CCTV. Alex Gray had just been on a trip to Ballachulish, because she simply couldn’t cope with not going places. Alan’s fan emails are from bus enthusiasts who know more than he does. And that man in the pub he made up? He’s still alive, you know.

Our last host, Abir Mukherjee arrived from the Green Room, to discover Theresa discussing a question from an event on ‘how hard it had been to find a husband at her age’. Alan had once been coerced into an impromptu lecture in Sweden, where after much hard work, the first question was whether he owns a kilt.

When asked for their weirdest way of killing people, they only had stabbings, poisoned sandwiches, strangulation by harp wire and stabbing someone in the eye with a pencil, to offer. And, erm, elephants. Ben McPherson joined us from Oslo with many thoughts on how hard it can be to fit in, in a nice country, when you don’t really belong. (I know.) But at least his doorbell moment worked.

In Norway they have huts, and warm(-ish) beaches. Abir was 25 when he discovered you could go to the beach and not wear a jacket (in Goa). Both Alex and Alan prefer living in the Hufflepuff that is Scotland. Lisa Gray has experience of writing about a place she doesn’t belong to, and Ben discussed the feeling of living somewhere but not speaking the language, when disaster strikes.

Nicola White, originally from Dublin, writes about that city, as it was in the 1980s when she left. Many of us only know somewhere from a long time ago. The last two panellists, Catriona McPherson and Alex Knight (aka Mason Cross and Gavin…) joined the conversation. I stared at Alex’s familiar face, until I finally placed him as Luke in Gilmore Girls. (Not really, but same face.) If you’re going for a pen name, it’s worth picking one that people everywhere can pronounce, like when Alex went to Starbucks as Mason and turned into Basin.

The most important thing to becoming a novelist is to finish writing what you want to write. Reward yourself with a visit to the toilet after writing some words. Alex believes in a daily 500 words, which he feels is manageable.

To finish, the talk turned to reviews, and you should obviously never read the online ones. Unless three stars for fitting perfectly under that wonky table leg will make you happy.

Bloody Scotland. What a – bloody – fantastic collection of crime stories! And what a gorgeous cover! It’s like blood dripping… 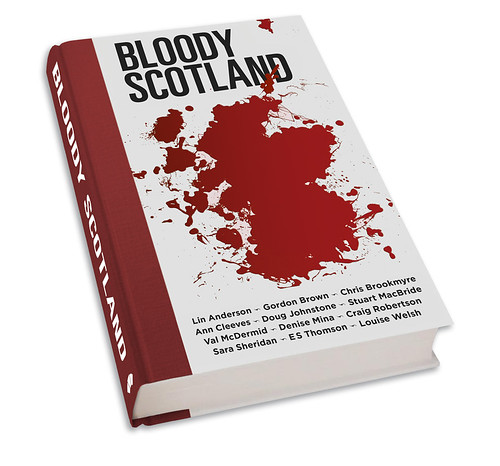 Although I have to admit to doubting the wisdom of going to bed so soon after finishing the last stories. How was I going to sleep after what Denise Mina put me through? Or Louise Welsh? She’d seemed like such a pleasant person when I got my book signed at the weekend. How could she?

Whereas Stuart MacBride, who usually is too dark for my general wellbeing, just entertained me, and almost made me laugh. Almost. I would like to see his crazy romp at Kinnaird Head Lighthouse with his insane characters made into a short film. I think. I might not be able to watch it, though. Crying out to be filmed, whether or not I am witch enough to view it.

This crime story collection with stories by twelve of Scotland’s best, was the brainchild of Historic Environment Scotland, or HES for short, in collaboration with Bloody Scotland. Why not have our professional killers write a story each, set in one or other of the many HES buildings or sites? Why not? Well, maybe in order not to scare people.

For those less feeble-minded than your witch, this is a marvellous memento of your visit to a HES site. It’s marvellous even if you never go, and after you’ve waded through some bloodbaths you might have second thoughts. So visit first, then buy, and read last. After which you either go back to look at the place again (I know your type..!), or your next visit will be to a place where Bloody Scotland has not murdered anyone.

Yet. I feel there should be more of these. Obviously not to be read at bedtime.

It’s not all blood and gore and devastation however. Chris Brookmyre is suitably fun and lighthearted, and Gordon Brown’s character has a lesson to learn. A couple of authors have gone for revenge, which was most satisfying. Or history, such as Lin Anderson’s visit to the distant past, or E S Thomson’s industrial history drama.

I’ve already mentioned how pleased Doug Johnstone was about my reaction to his tale about the Forth Bridge. And if I don’t mention Val McDermid, Sara Sheridan, Craig Robertson or Ann Cleeves next to their stories, it’s to avoid spoilers.

You don’t want to know when to beware the narrator/main character, or when they are as innocent as you want/expect them to be. Or people close to them. There’s a lot of bad people out there.

But as I said, once the sleep problems have been dealt with, I can’t but want more of this. I can think of authors not yet asked to kill for HES, or places to visit that have not yet been, well, ‘visited.’ 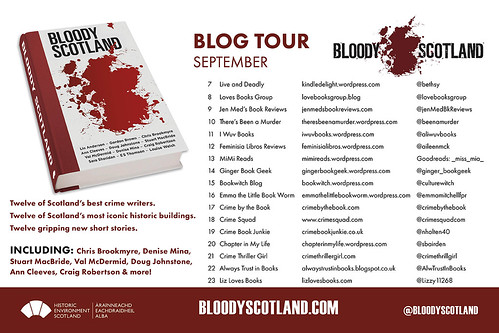