Aunt Scarborough introduced the young Offspring to the Singing Kettle about twenty years ago. At that time they were mainly famous in Scotland, but filtered south to England during the period when we adored them the most. They were wonderful. And funny. Good all round entertainers, who took well known tunes and gave them new lyrics, or wrote their own, or simply used traditional songs for children, but in a fun way. Nothing boring about them at all. I would happily have listened to them with no child as an excuse.

Now they are stopping their Singing Kettling. The two main stars retired a while back, and with the audience age plummeting, they no longer have their ideal primary school aged children, but are performing funny songs to children perhaps too young to understand. (See my comments about this below. ‘Little Diddle’ didn’t even know his own name. But he was cute.)

But I simply had to treat Daughter to one more humiliation while she’s home for Christmas, and take her to see the farewell tour. (She enjoyed it, really.) It was good, but I can see that things are not what they were. Lots of things aren’t. The Singing Kettle have provided fun and intelligent songs for many, many children. And judging by comments from various astrophysicists on Daughter’s facebook page, and the fact that Dodo gave Son a Singing Kettle DVD for Christmas, I’d say that those primary age children may have got older, but they never forgot. That’s proof of quality.

Below is CultureWitch’s review of Monday morning’s concert at the Albert Halls.

“There was a slight disadvantage to sitting on row five when they used their large water ‘pistol’ from the stage. It reached. Very well, too. Although I didn’t do what many parents did, which was to hold their children in front of them as shields. Some parents they turned out to be! 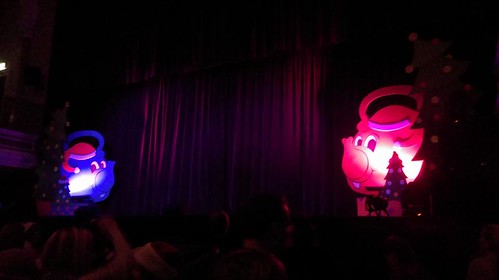 I – on the other hand – was an exemplary parent and brought my baby girl to what has been advertised as the last tour for The Singing Kettle. She probably hadn’t been since the millennium concert at the Albert Halls in Stirling, which means it had been a 15 year gap. Contrary to what Daughter thought, you can actually go to these shows as an adult. Neither of us fell over, bumped our heads and cried, nor did we require help to go to the toilet.

It was good. Apart – possibly – from the water and the fact that The Singing Kettle will be no more. It was a tonic, on a Monday morning after Christmas, with plenty of grinning and laughing, not to mention singing. I did draw the line at rocking my poor head from left to right and forwards and back, going over the Irish Sea. 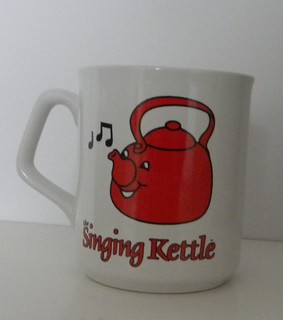 Despite there being no Artie and Cilla anymore, Kevin and Anya did a great job, ably assisted by the still baby-faced Gary and his purple trombone. Anya is testament to the strength of the brand, having herself been one of the audience participants, being invited onto the stage. (She clearly never left, which was something I did think about as parents blithely let their offspring wander off with these strangers, in order to perform on stage with them. Did they see them again? ‘The tiniest ever’ Diddle in the first half was the smallest, cutest participant I have ever seen. A little confused maybe, but so keen, and later seen trying to return to the stage again.)

We knew some of the songs (because back then we were pros) and some not, as they were possibly using new material as well as recycling old songs forever. Daughter had forgotten Bunny Fou Fou, but not I. And you have to love Music Man (even without Cilla…).

The preparing and cooking (and subsequent burning) of the turkey made an impression on the younger part of the audience, especially cleaning it with a toilet brush. The snowman who sneezed all over and the galloping reindeer, not to mention the adorable yellow ducks (including tiny Diddle) helped make this a very visual show.

But we weren’t allowed to take pictures (if I’d been Diddle’s mother, I’d have taken a photo of him in his duck costume anyway!) so we don’t have much to show you. Daughter did hit the merchandise stall as soon as we arrived, however. It might be her last opportunity. 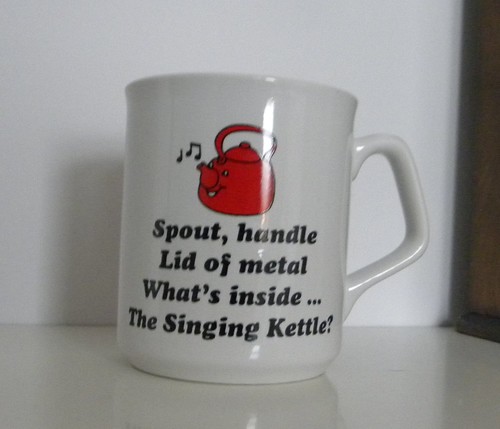 There was some Hokey Cokey at the end, and a fitting finale of pushing Granny off the bus. (As if we would…)

If you’ve never seen The Singing Kettle live, I feel sorry for you. We used to travel across half the country for them, whereas now it was a mere walk away.”

Evil and deadly and Scottish (ish)

It’s going to be blo*dy difficult to choose. I am talking about Bloody Scotland. The programme goes live today, and I have to urge you to buy tickets while stocks last and all that. Hurry.

You might also want to stock up on stamina. I began making a list of what I want to see and hear, and setting aside that little inconvenience of having mislaid my timeturner, meaning I can only go to one event at a time, I have come to realise it could turn out to be too taxing going to one event for every slot in the day. Do you think? Or perhaps I can?

It’s in Stirling, and what better place for it? The organisers have commandeered the Albert Halls and the Stirling Highland Hotel. They are near each other, so the toing and froing will be OK. Or would be but for that little matter of the hill. The hotel is the former Stirling High School, the alma mater of the Resident IT Consultant. (No, he didn’t go to school in a hotel. He had to go somewhere else.) The Albert Halls sounds grand, and seeing as it has been good enough for the Singing Kettle, it will be good enough for the cream of crime.

I’m aware that I haven’t listed all the crime writers who are appearing. You will just have to check out the programme. Karin Fossum and Yrsa Sigurðardóttir are coming, which means it’s not exclusively Scottish. It’s northern, though, and Scotland has expressed this understandable interest in joing the Nordic countries. And I daresay that if they murder well enough, we might let them.

There are so many great looking events I don’t know how to choose, and I won’t even try to list them here for you. What I absolutely mustn’t miss is Gillian Philip and Cathy MacPhail with Helen FitzGerald talking about YA crime.

A couple of fancy dinners are also part of the programme, where you can dine with your favourite crime writers. I hope that the former school does nice meals. They say the dinners go on until late. Luckily it’s downhill on the way home (unless, of course, it isn’t – depends on where you intend to sleep), so that’s all right.

Get on that website now and book your tickets. There are even reduced prices if you buy lots (except I’m not sure they have been reading those maths books I’ve mentioned) of tickets.