All Shining in the Spring

The story of a baby who died.

I have not – yet – needed this book, but I can see how necessary it could become, when you least expect it, either for yourself or for someone you know.

Siobhán Parkinson needed a book like All Shining in the Spring, when her baby died 25 years ago. But there were no such books, so Siobhàn wrote one, for her living son, Matthew, about the brother, Daniel, he was waiting for, who died.

What do you say to your small child, when the baby you’ve talked so much about, will not actually be there after all? That the baby died, or will die at birth.

This book is both quite matter of fact, as well as loving and sweet. You love little Daniel, and you feel for Matthew and his parents.

Siobhán became one of Ireland’s best known children’s authors, and was the country’s first Laureate na nÓg. And Matthew became a publisher, at Little Island Books, now re-issuing this book 25 years later, with the original illustrations by Donald Teskey.

For a brief moment on Sunday morning I forgot what Mairi Kidd and Siobhán Parkinson were going to talk about, but as their chair Heather Parry reminded me, it was women. Mairi has written about 49 Scottish women in history in Warriors and Witches and Damn Rebel Bitches, while Siobhán’s slightly earlier book, Rocking the System, is about 20 Irish women. 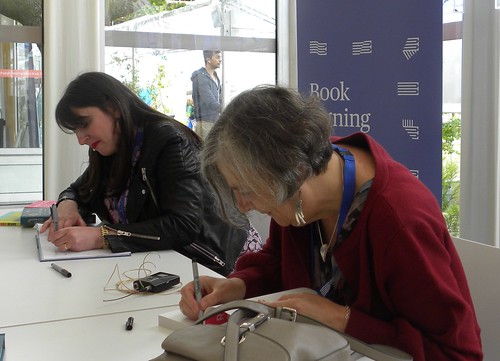 Reading from their books, Mairi told the story about the doctor who turned out to have been a woman, while Siobhán chose her favourite of the twenty, a blood-guzzling woman who was first widowed at 15 before falling in love with a handsome man on a horse.

Siobhán – who published her book through the publishing company she started – couldn’t afford more than twenty women, as she wanted the book to be illustrated as well, and that’s as far as the money would go. Mairi seems to have struggled to keep it down to 49. 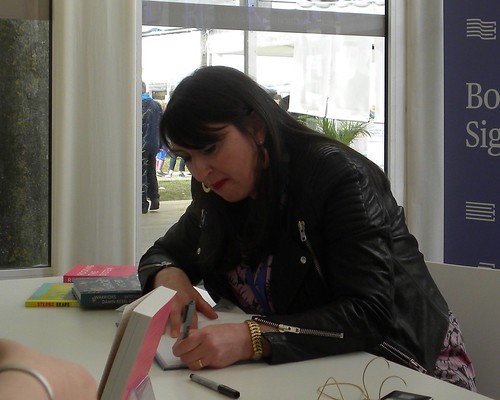 The chosen women didn’t have to be dead, but needed to be at least so old that what they had done was already in the past. Mairi pointed out that in Edinburgh there are more dog statues than statues of women. And also that before 1700 women’s voices appeared in writing much more than later, because of all the witch trials.

One question was who the two would choose from people living now, for a future version of their books. And who had they left out? In many cases some women had done similar things, in which case the most obvious one was picked. Asked who Mairi’s 50th would be, she reckons her grandmother. But she had put a long list at the back of her book, listing everyone she’d thought of but not been able to add. 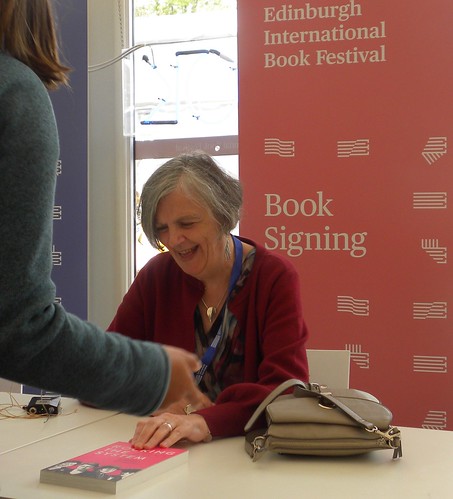 Siobhán mentioned Bernadette Devlin, who had been in the news quite recently, and when Mairi said she can’t remember the 1970s, Siobhán can. She talked about an Ireland where contraceptives and divorces were illegal. She doesn’t believe things will go backwards now, but the state of things is not good.

We need to live the life we have, rather than the one we might wish for. We need to be a witness to what is going on.

Having rather carelessly planned a day where I had several events in quick succession, with the minimal 15 minutes between them, I started Sunday by gobbling an early egg sandwich to fortify myself. That’s how I noticed the country’s First Minister arrive, seemingly for a private visit, judging by her clothes. We know Nicola Sturgeon likes reading and so it’s nice to see her wanting to go to a book festival like the rest of us. 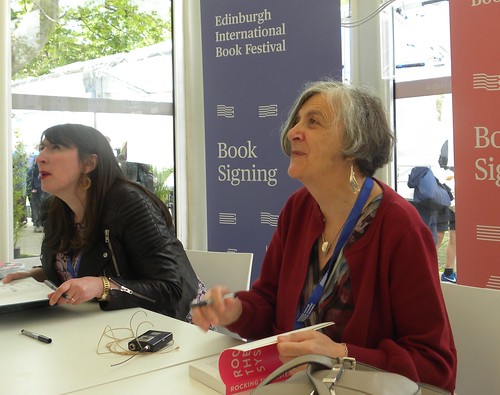 It was a grand day. (That actually came out as more unintentionally Irish than I’d been expecting. Sorry.) I saw two Irish Laureates na nÓg in one morning. First Siobhán Parkinson and later Sarah Crossan. (A bit like the two Poet Laureates the other day. They come in twos.) 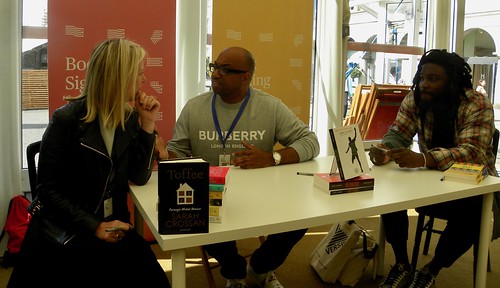 I took a turn round the square to begin the day, seeing as it was nicely quiet so early. Well, quiet and quiet; I could hear Andy Stanton being noisy in the Main Theatre. But that’s only to be expected.

During the day I came across super-librarian Yvonne Manning, and also Jake Hope, whom I’ve not seen for ages. Caught a glimpse of Dan Smith after his signing. Went to stake out Mark Haddon’s signing, and discovered someone I’ve seen many times before. We’re not acquainted, but she’s a lady who knows how to be first in the signing queue. 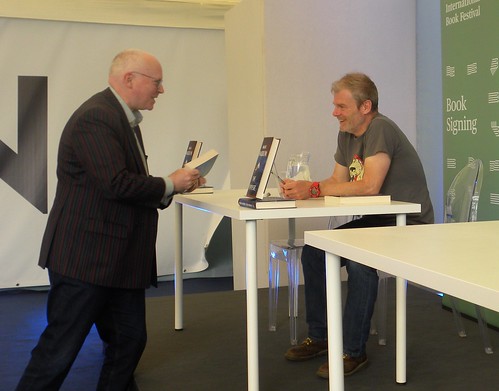 Went to two events, and was only foiled from staying for my third intended event – with Debi Gliori – by arriving so late there was no Bookwitch-shaped seat left. I decided Debi was in good hands with plenty of little readers, and waited until I saw her in the bookshop after, where she did her slowest book signing in the world, again. But that’s as it should be. 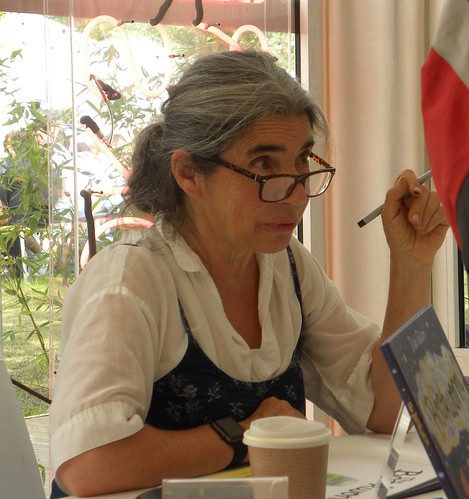 Once I had this extra time on my hands I decided to treat myself to tea and cake. However I was spared the date and walnut cake by me turning invisible. I know I am both short and insignificant, but the place was completely empty, and no one noticed me. So I moved sideways a little, in case I was standing in the wrong spot. Asked them this, and they were surprised I wanted to order something. Unfortunately, none of the four staff who were busy doing nothing seemed to want to serve me, and after a longer embarrassing wait I left them to it.

I mean, who wants cake, anyway?

The lovely Rosie in the press yurt organised tea for me, and I drank it outside, watching the current Laureate na nÓg being well attended by three publicists. Even I was impressed. And there was a man wearing pink leggings and a mini-kilt. 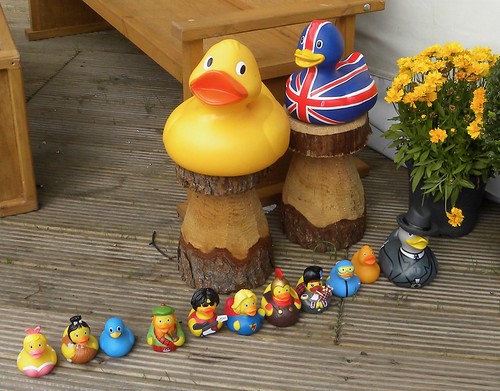 After several photo opportunities where I had to do all the work myself, as the Photographer has gone off to Iceland, I realised I’m not terribly good at this. Unless it’s my camera that’s not so good at it?

Then I went back to Waverley for the train home, encountering Jenny Colgan coming the other way.

What a lovely book! Siobhán Parkinson’s Miraculous Miranda is a feelgood and funny novel about young Miranda, her family and friends. Miranda is an intelligent girl who works hard and she is often the winner of Word of the Day at school. She adores new words. 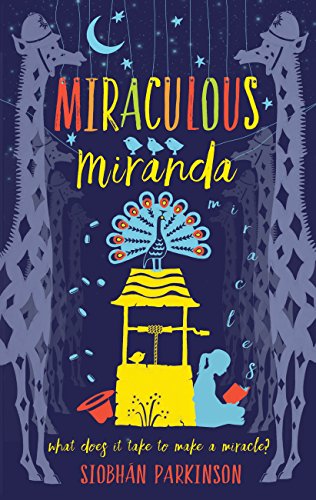 She has a best friend, COR, and there is a difficult boy, Darren, who needs sorting out. Miranda also has an older sister, Gemma, who at first is described as your typical older sibling, with attitude. But we slowly discover that Gemma is ill. Very ill, in fact. Except Miranda appears not to know, and she is mostly annoyed when yet another hospital stay means her crazy Gran has to look after her.

So as we follow Miranda’s daily struggle to win Word of the Day; in reality her family is falling apart with worry over Gemma. She has heard about other ill children, who despite trips to Disney, still died. The reader can probably work out that death is not unlikely.

But this is a children’s book, and the title suggests a miracle might happen, so maybe not? Well, it’s a bit of both, and it’s tremendously well done.

And Darren is actually pretty adorable. (I reckon we’ve all known someone like him at school.)