Discovered someone was sitting in ‘my’ seat in the Corner theatre for the event with Sophie Cameron and Sally Gardner. But I can be flexible, if I really have to.

Sally and Sophie’s books are both about people falling out of the sky. Sally was looking for what it is that makes us human; what we have that aliens don’t. It’s love. Sophie, on the other hand, had been inspired by the falling angels in an old deodorant commercial.

Sally kicked off by reading from My Side of the Diamond, and I was reminded again of what a great voice she has. 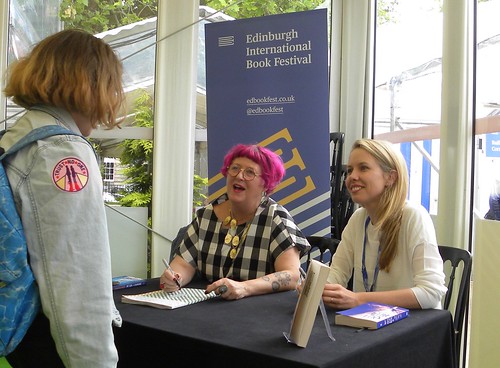 From there the discussion went on to Sally’s dyslexia, and then back to how she came to start writing in the first place. It was the bailiffs. And you can’t argue with that. If you need money, you need to find a way to earn some. Sally’s first book came about with ease, as did the way it was accepted for publication. (Something to do with a Sainsbury’s carrier bag with a hole in it…) But after the first time, it’s not been quite such smooth sailing.

Asked if she prefers a certain age group, Sally said no, and that she has now written an adult book. Although she does feel that younger readers are more intelligent than adults.

Then it was the turn of Dick King-Smith fan Sophie to read from her debut novel Out of the Blue, which is set in Edinburgh, during the festival. Originally set elsewhere, Sophie changed this when she returned to work in Edinburgh and realised that there aren’t a lot of books set there. Her second, standalone novel, also has an Edinburgh setting. And somewhere in all this there might have been talking dolphins.

Both books have a black main character, and this led to some discussion as to whether white authors are allowed to write about black people, which Sally finds worrying. Also, there are not enough translated books, and after March next year she reckons other countries will not want ‘our’ books.

Chair Lucy Popescu had an author mother, who always put her in her books, so she wondered if Sally and Sophie have done that. Sally said her children would have killed her if she had. 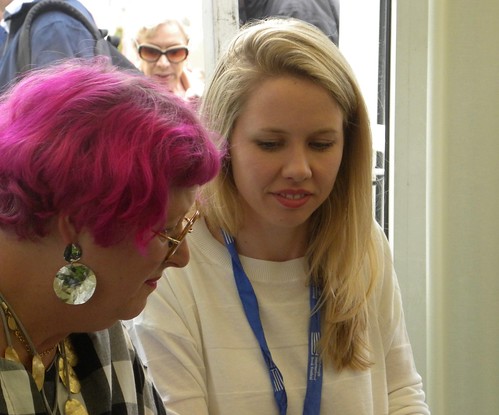 It’s important to bring boys up to read books by and about women, and Sally mentioned her favourite heroine, Daisy in Meg Rosoff’s How I Live Now. In some cases it seems that statistics on who reads might be incorrect, as boys don’t want to say they do. Sally had a story about a school where pupils were not allowed to read on their phones. One boy was caught doing so, but was nearly forgiven when the teacher discovered he was reading Dickens. But the boy insisted on the punishment of being expelled, rather than have his reading habits made public. He enjoyed books, but wanted to stay cool by reading on his mobile like everyone else.

So, books can be a very private thing for many.

Asked about fan fiction, Sophie said she’d written some. It’s good practice, and you get feedback on your writing. Sally used to tell herself stories [before she could read] and tried to see if she could make herself cry. She sees all her stories as films in her head, and until recently believed that this happened to everyone. When writing I, Coriander, she listened to the story as though it was radio.

Sophie is happiest writing in cafés, while Sally has adopted a rescue dog who insists on sitting on its favourite chair, forcing her to stay and write in the same room.

And apart from a drunk giraffe and a Rupert Bear with tits, that was pretty much it.

Thank goodness for favourite publicists! They have a way of making a witch feel better. Just before leaving Charlotte Square on Tuesday afternoon I went to Lindsey Davis’s signing, and no slight intended for this amusing and successful crime writer, but I popped by to say hello to Kerry Hood. We chatted, she asked after Offspring – all these many years later! – and we sort of competed on who was the oldest and most confused of us.

After discovering I had a problem with my book on the train to Edinburgh (it was too short. The book. Not the train), my day started with a woman on the bus who was not prepared for what you do on buses, which is pay, and to have your purse standing by to do it with. That cost me the photocall with Frank Cottrell Boyce. Oh well. I got to see him at his event. 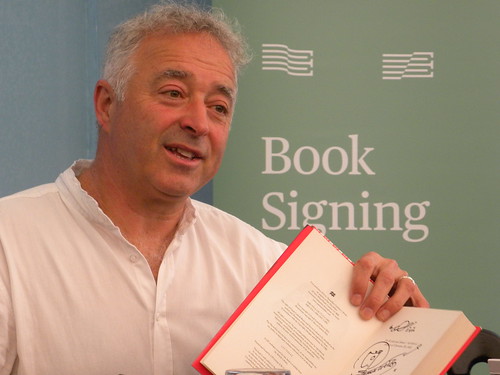 Ate my Three-Men-in-a-Boat cheese sandwich watching Chris Close photograph a fairly reluctant author. And then it rained. I also discovered I had pockets, having spent the morning mourning the loss of them. 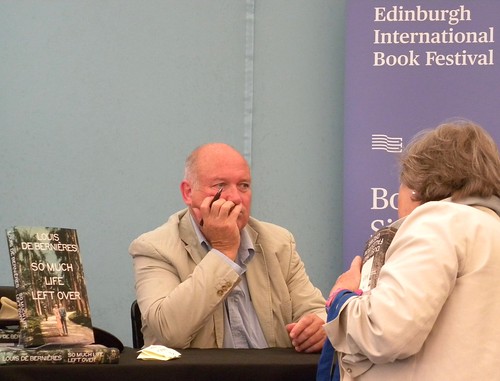 After Frank’s event I battled the bad light in his signing tent, toing and froing between him and Louis de Bernières, while also trying not to miss Lindsey’s photocall. In the end I did that thing which works when waiting for the gasman, except instead of going to the bathroom, I popped back in to see Frank and also opened the door for a young man carrying 16 pints of milk, and there she was. Works – almost – every time! 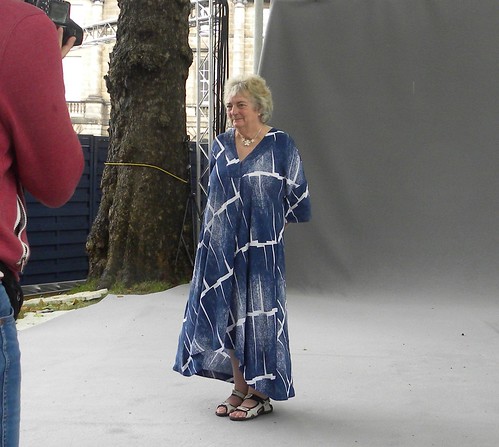 Bumped into Sally Gardner and we had a chat, and then I went over to the children’s bookshop to see if I could corner Alison Murray who was supposed to be there. While I waited I snapped Sibéal Pounder signing books, and chatted to Ann Landmann who had chaired her event, which sounded as if it had been great fun. I then proceeded to show my writer’s credentials to Ann by talking about the light across the square as having been badder. Worser. Or it was simply brighter where we were… 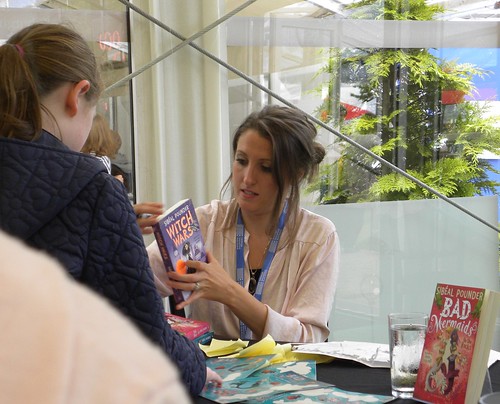 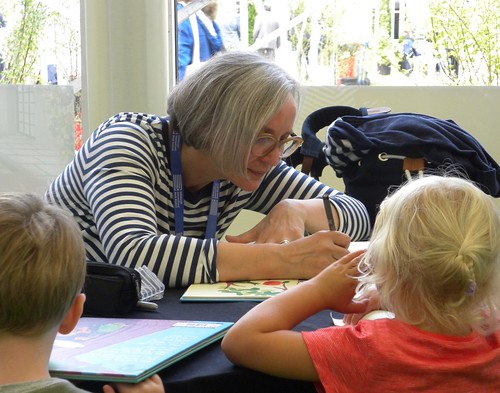 Then it was time for Sally Gardner’s event with Sophie Cameron, where I encountered L J MacWhirter again. Instead of brandishing a prawn sandwich at her, we talked about hen parties and fangirl moments. Charlotte Square is good for the latter. 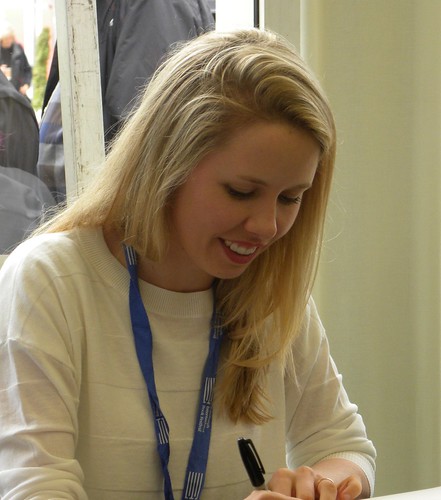 Back out to photograph Sally’s gorgeous new hair in the bookshop. It’s a sort of cerise. Her hair, I mean. 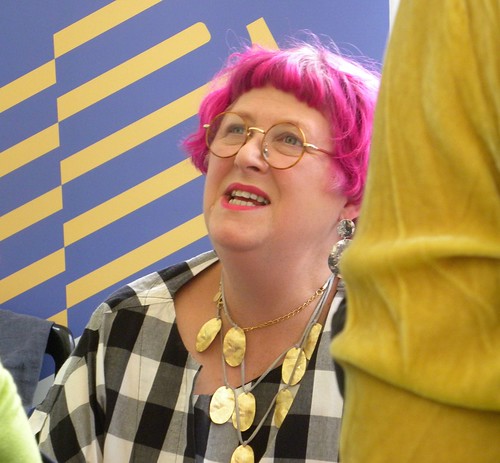 That’s me back at the beginning, telling Kerry about Offspring and her saying I shouldn’t keep them waiting.

So I didn’t. Even if Son had mentioned I’d be better not arriving too early…