Perfect holiday reading if you already like crime, and hopefully also if you haven’t yet discovered it. The Crime Club’s Twelve Deliciously Intriguing Mysteries is great fun. 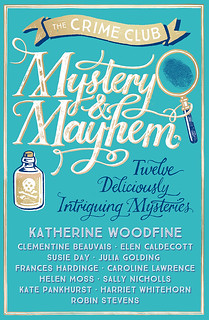 Twelve criminally minded authors, herded and edited by Katerine Woodfine, offer up youthful versions of traditional crime styles. You have Impossible Mysteries, Canine Capers, Poison Plots and Closed-System Crimes, all equally intriguing and entertaining. Maybe some of the crimes are not as noir as what adults read these days, but there is murder and fraud and all kinds of trickery.

I liked them all. What I especially like is the fact that younger readers get a proper introduction both to crime reading, but also to crime vocabulary. You know, schools don’t always teach useful words such as purloined.

Some are set today, some in the past. Some stories take place in other countries and others right on your doorstep. The ones by authors I know lived up to my expectations, while those by new (to me) writers were great introductions.

Put a copy in the hands of someone young and bored this summer.

I am the proud owner of a signed copy of Basu ni Notte. And I didn’t even know that it was called that, because I don’t read Japanese. (I know. It looks rather like Italian.) That in itself will tell you that my reading of Basu ni Notte has not gone terribly well, either, since I don’t read Japanese, and the book is in Japanese. Picture book, but still.

So I stand to benefit from the new reading guides issued by the Astrid Lindgren Memorial Award people. They have just come up with twelve guides for books by ten recipients of the ALMA, one of whom is Ryoji Arai. He shared the prize with Philip Pullman in 2005. That’s when I was crazy enough to go to Gothenburg just to hear Philip speak. A side effect was meeting up with this Japanese author and illustrator.

He supposedly didn’t speak English, but he did – a little – when it came to the crunch.

No language troubles at all with Marion Lloyd. As you can tell, I’ve not ‘bitten’ anyone here for a while, which is why I am offering you old news. Or not news so much, as a link to what I thought was a very nice blog post by Susie Day about this super-editor when she retired.

And speaking of fantastic and reading, I eventually enticed Daughter to read the best book of 2012. None of us have got round to much reading during the recent eating season, but once the suggestion was made, she found it hard to stop until she was done. She, too, liked Code Name Verity by Elizabeth Wein.

I have no expectation of reading hundreds of books during 2013, but a few would be nice. I need to start collecting for the next ‘best of’ award. But as Cathy Butler said in her blog post about reading speed, we are allowed to be really slow. It’s not better to be fast.

Although it would be handy.