It’s the tulip bulbs I’ve never forgotten. Even as a child, learning that Audrey Hepburn had to eat tulip bulbs to survive during the war, it seemed both fantastic – in a bad way – and hard to believe. Just as I couldn’t really get my head round what Audrey was doing in the Netherlands.

If you read Tom Palmer’s new book Resist, you will find out, and it will probably leave you with tears in your eyes. Unlike many novels about the resistance in the war, in whatever country the story might be set, this one is a little more – dare I say it? – ordinary. Because it is based so much on what actually happened to Audrey and her family, rather than what an author has simply made up.

You meet Audrey – called Edda here, for her own safety – in her home village of Velp, near Arnhem, as she is setting out on helping the local resistance. It’s the kind of thing you need to keep secret, because the less anyone else knows, the safer you all are. Edda’s family have had bad things happen to them, and lying low is the way forward.

Covering the last two years of WWII, we learn much about ordinary Dutch people. Except, they are not ordinary; they are brave, albeit often in a quiet, life-saving way. I learned more about Arnhem, which to me was ‘just’ a place name connected with the war, in a bad way. And the tulips.

The same age as Anne Frank, we have to be grateful Audrey survived, if only just. It’s hard to believe that starvation can be so much more of a threat than being hit by bombs, say. And people fleeing their old homes has become much more of a current thing than we could ever have thought, until recently.

This is the latest of many thoughtful books from Tom Palmer about WWII and its effects. Its brevity adds to its seriousness. And the cover art from Tom Clohosy Cole is stunning.

Tom Palmer doesn’t usually make me cry. Yes, I enjoy his books, which are thoughtful and deal with a mix of children today and people from the past, with a sports element, and the reader learns through them. But this one, Armistice Runner, was something else. Published in the Conkers series by Barrington Stoke, it’s a little longer than the usual dyslexia friendly books. 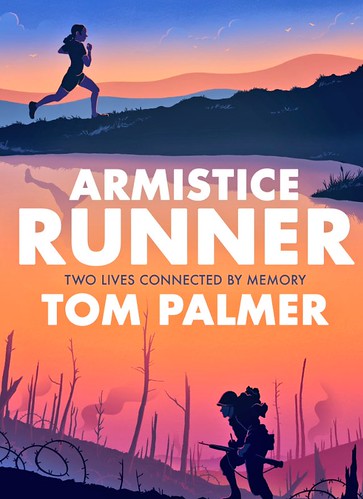 It’s about Lily who is a fell runner, practising for an important run near her grandparents’ house in the Lake District. She worries about her gran who has Alzheimer’s, and she fights with her younger brother.

In one of her more lucid moments, Lily’s gran brings out an old box for Lily. It used to belong to Lily’s great-great-grandfather Ernest, who was a fell runner before he went to war in 1918. Lily reads his log book, which is almost like a long letter to his dead brother Fred; about running and about the war.

It’s so gripping, and as the reader along with Lily herself desperately wants to discover if someone will be all right or not, Tom does a very naughty thing and interrupts both us and Lily with something much more urgent, and there was a wait to find out what happened.

Even if you’ve read countless other WWI stories, and this obviously has overlaps with many other tales, it also has something that belongs only to this book. It’s very good. And sad.

(As long as I don’t have to do any fell running. I’m still out of breath.)