Now that we don’t have Judith Kerr to come and do events, we can have events about her. Because we need them.

Judith might have looked like a little old lady, but in Tuesday’s panel we learned that this was a woman who could out-party those much younger than her. I think Daniel Hahn rather envied her her stamina in that department. And Lindsey Fraser remembered a time when Judith’s train had been late and she needed a whisky, a bit early in the day, but someone sourced the requested tipple.

Her arrivals in the yurt always caused a certain kind of murmur among those present, those who were more famous than Judith, richer, younger; even more important. Everyone had some kind of relationship to her. Catherine Rayner said it felt like meeting the Queen. And like meeting the Queen, it was impossible to talk to her. She tried, but could never get the words out.

Catherine’s friends would ask ‘is she any good?’ as though Judith’s simple picture book drawings meant she couldn’t do proper art. She showed us some of Judith’s sketches, and they were certainly proper art. As was Mog’s scared face in the book about Mog’s nightmares. And those pictures of birds with teeth!

The first book, The Tiger Who Came to Tea, often caused people to read hidden meanings into what the tiger symbolised. According to Daniel, Judith said it’s a book about a tiger who came to tea. As for Mog and the translation into German there was a discussion with the translator that Judith lost. Mog would be a boy in German. And then she gave Mog kittens. 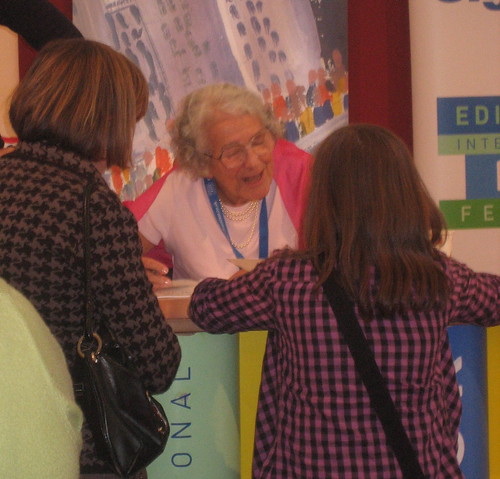 After Judith was widowed she kept drawing, sitting at the same table she’d worked at for fifty years, saying ‘if I didn’t draw, I’d probably have taken to religion.’ Her husband was the one who suggested the plot for her first Mog book by saying ‘couldn’t she catch a burglar, or something?’

Tom Morgan-Jones talked about Judith’s last book, Mummy Time, and brought out so much more meaning from it than I’d seen. It even had those horrible teeth in it, again. He read most of the book, showing how it works on two levels; for the child, and for the adult reader.

Like Tom, Eilidh Muldoon never met Judith. And as everyone seemed to say, she also found the Tiger really scary. When Goodbye Mog was published, she was too old for picture books, but has since discovered how good it is to read them as an adult. The pictures in this last Mog are dreamier than the early Mog illustrations, and this could in part have been due to the same ink not being available. 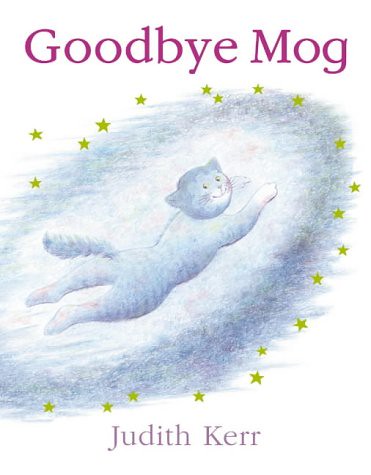 It’s not only Mog’s death that has helped readers deal with bereavement. Kate Leiper has experience from working in care homes for people with dementia, where she used to show them My Henry, which is about an old lady in a home, who dreams about her dead husband coming back for her. This was written after Judith’s husband died.

As Daniel said, you can have quite dark stuff in picture books. It’s all about condensing, according to Catherine. You put a lot in and then take more and more out. Judith would never use words about that which you could see from the pictures. And in Mog in the Dark – the nightmare book – she only used 50 [different] words.

This was a wonderful panel event; one which made us love Judith Kerr even more. As someone said, she had faith in human nature. And she considered herself British from the start of WWII. That’s worth remembering now, when we remember Judith. The piece from When Hitler Stole Pink Rabbit, read by Lindsey, about the family fleeing Germany, approaching the Swiss border by train, and being so very nervous. It’s all coming back.

The Boy and the Globe

Did anyone notice that it’s just been the 400th anniversary of the death of William Shakespeare? Not that I feel it’s quite proper to celebrate anniversaries of deaths, but still.

There are a lot of books out with some kind of Shakespeare connection. Tony Bradman’s The Boy and the Globe is one of them, and it’s a Barrington Stoke Conkers book. It’s the one I mentioned a few days ago as having given me so much more pleasure than the book I abandoned immediately before it.

What’s so fun is seeing what different authors can do with the same theme. The Boy and the Globe is just one story set in 1611, featuring a young orphan. Toby is forced to take up a life of crime in order to eat, but it’s not something he wants to do. By chance he ends up thieving at the Globe one day, and is discovered, in more ways than one.

The boy is befriended by Shakespeare, who is struggling to write a new play, and inspired by a book Toby has just read, he suggests the plot for Will’s next masterpiece, The Tempest. 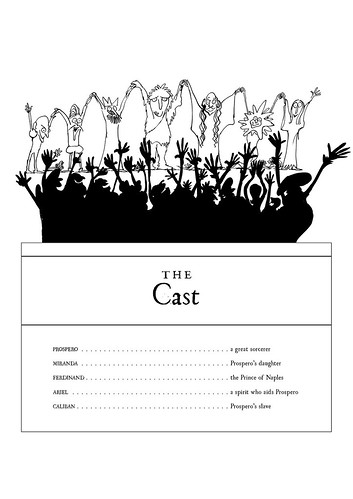 He gets to do a bit of acting, too, as Shakespeare writes a part for him, and from then on it’s less crime and more theatre for Toby.

Lots of fun and pretty instructive of life in London at the time, as well as giving a theoretical glimpse into the life of Will. I expect any parent of a child who reads this to be forced to make a trip to the Globe before long. (If they are careless enough to mention it’s a real place.)

Illustrations by Tom Morgan-Jones, and lots of Funne Activities for Boyes & Girls at the back of the book. (We really ought to celebrate dead people a bit more.)