Another full session in the Corner theatre, and another pair of women authors who know what they like and what they want. The two debut authors, Sophie Anderson and Tomi Adeyemi spoke well and never once ran out of opinions.

They were ably aided by the beautifully named chair, Fiammetta Rocco, who oversaw not only the crying of Sophie’s youngest child, missing mum, but made sure Tomi retold her Bristol experience in Waterstones when she met a most forceful and aware three-year-old at what was her most favourite event ever… 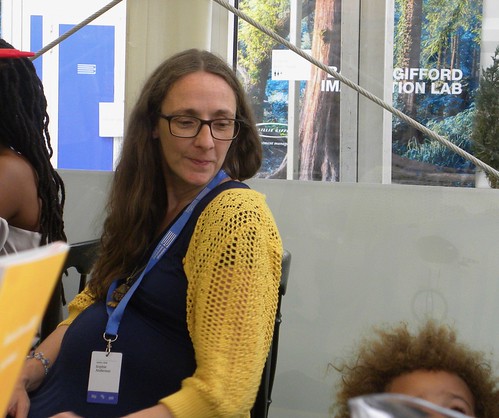 I loved Sophie’s The House With Chicken Legs, but have not read Tomi’s Children of Blood and Bone. She had plenty of fans in the audience who had, though.

Sophie reckons we are all alike, as well as different, and she uses old stories, renewing them to suit. For Tomi writing is like therapy, and never more so than after a recent incident when police came to her home in California. As a black person she couldn’t be sure she’d even be alive much longer. Writing and tweeting about it helped her get her voice back.

Although both authors had given in to the need to remove the parents for plot reasons, Tomi feels things are now moving towards letting parents stay in books. We all think we are right, and as she pointed out, with the microphone she was unstoppable for the moment. 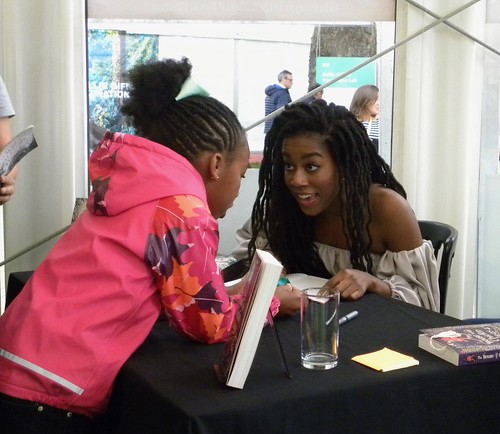 These two almost fought over whose turn it was to speak, which made for a refreshing change from the polite ‘no, you go first’ that you often get in these situations.

Both their books are based on courage. Tomi said she always expects the worst, but that ice cream is nice.

Sophie started her writing late, after various jobs, when the children arrived. Chicken Legs is her sixth book, and she has several bad books in her drawer. Asked about her next book she turned secretive, but let on that there is a bear.

Tomi began writing for real when she was in a job she hated, and she wrote after work, spending longer and longer on doing it. After The Hunger Games which made her cry and made her angry, she felt she must write about black characters.

There was a question about the strange animals in Tomi’s book, which she explained as her ‘repressed desire’ to have a pet. And her kind of lion does not exist in Nigeria. 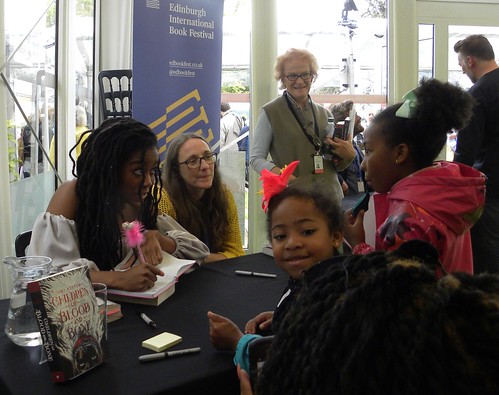 When authors talk like this about their writing, it makes you want to read their books, and I hope that the fans of one, will now want to check out the other’s book as well. And I know it is wrong to mention this, even to have noticed it, but there were more black people in the audience than usual. It would be wonderful if everyone could see themselves in literature, and come to book events.

Philip Pullman and I talked about the weather, which was Goldilocks-like. Not too hot and not too cold. Not wet. Nor sunny. It felt very British, on this the first day of the book festival in Edinburgh’s Charlotte Square. 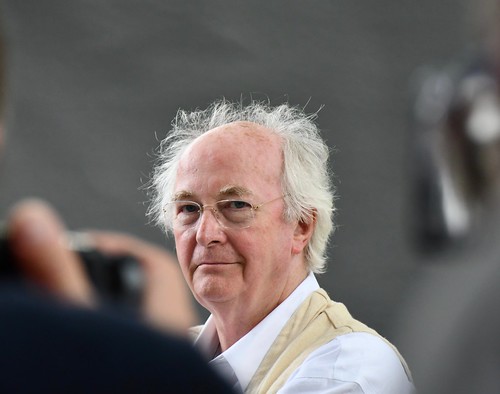 It’s a new, streamlined square. Less higgledy piggledy, although no doubt more ‘character’ will find its way onto the fresh decking before long. I offered them my sandwich wrapping, but it seems they didn’t feel the need for it. I now know how they were able to make the Main theatre bigger. They picked up a whole theatre and put it in the middle of George Street. Very clever.

The Photographer and I arrived early and had a leisurely start, collecting tickets and getting to grips with all the changes, saying hello to press boss Frances, and gossiping with Theresa Breslin’s Mr B – whose t-shirt sported Mary Queen of Scots on the front and Rasputin’s dagger ‘in’ the back, so he had everything covered. Waved to Cathy Cassidy (wearing an unexpected red…), before venturing across to George Street to watch her signing in the much improved signing tent. 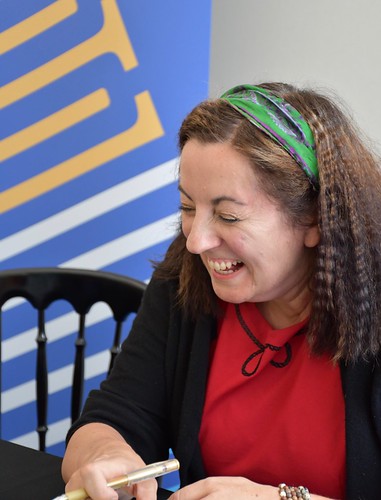 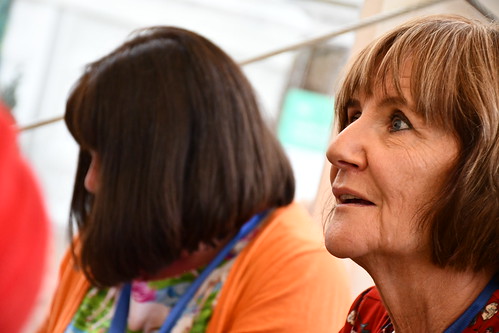 After noting that the festival regular with the magnificent beard was there again, we went to Theresa Breslin’s event with Holly Webb, chaired by Daniel Hahn. It was really full, despite Theresa’s grandchild choosing to go to see Terry Deary instead.

Chatted to Kate Leiper in the bookshop afterwards, and then went back to the behind-the-scenes decking where we found Philip Pullman with a pile of [his] books. Had a second go at chatting to Cathy Cassidy, and watched as Chris Close photographed an unknown, attractive female author who, when I got to my next event, turned out to be Tomi Adeyemi, appearing with Sophie Anderson. 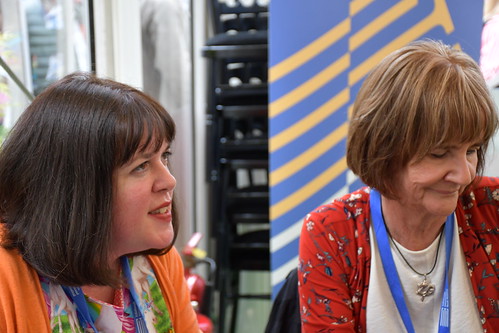 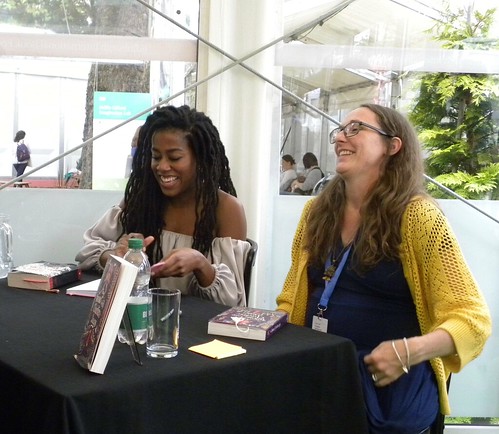 This was another full event, and I realised that having left the Photographer to deal with Philip, I was on my own and needed to take pictures of Sophie and Tomi in the bookshop. I’m short, so was able to use the entrance for hobbits and munchkins. Saw Vikki Gemmell and wanted to say hello, but she ran away. Quite understandable.

There is a blur after that, but I definitely saw Linda Strachan and Lari Don, Gill Arbuthnott, Kathryn Ross, and Carol Ann Duffy. Val McDermid was around, as Philip Pullman’s chair. Someone came up to me and asked if I was Bookwitch, so I had to admit I was. Seems our paths have kept crossing, and now she wanted to say hello.

L J MacWhirter found me mid-prawn sandwich, and I had no idea that this would scare her off so fast. Didn’t mean to, L J! And while I was enjoying those prawns I watched as Chris Close commented on Jacek Dehnel’s outfit – it was very, erm, chequered – before persuading him to pose. 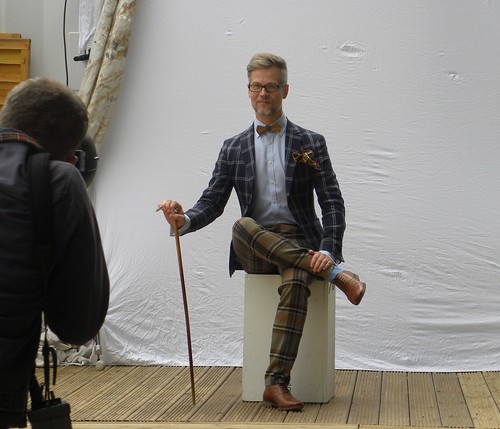 Ngūgī wa Thiong’o was being interviewed nearby, before also getting the Close photo treatment, and director Barley himself brought some more tartan for this venerable author. 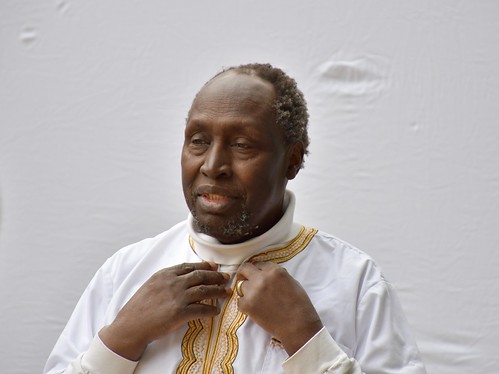 My Photographer returned when Philip Pullman’s sold-out event came to an end, and we gathered ourselves and went in search of a train home, hoping that seven was both early enough and late enough and would mean there was room for two tired witches. There was. Just.