That is a phrase I have so far been unable to say on this blog, which makes it noteworthy. Saw her the day before as well. And before that it had been eight years. Bookwitch is only seven, which is why I’ve never said it on here. The RCL doesn’t travel much these days, and I find that the town where she now lives is – quite frankly – on the wrong side of the country.

It is far and it is not on the railway. That’s where the Resident IT Consultant comes in, because he can be made to drive witches to places not so easily reached by other means. (Before you ask, the broom suffers from heat exhaustion.)

The town where the RCL lives is a lovely town. Don’t misunderstand me. It’s just not convenient. So, in-between lunch at her place one day and dinner at a restaurant the next, we went to see her niece at Växplats Nybyn, which is where the RCL does most of her work in the summer. My old mentor might be gasping for air in the hot weather, but she still helps her niece with serving coffee at her herby heaven in the countryside, almost daily donning a pretty purple pinny. 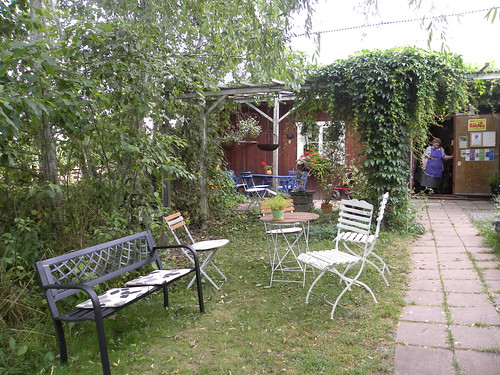 If you think the photos look a little dark, I’ll just mention this was immediately before some magnificent thunder and lightning. Which did make it a teeny weeny bit colder. Not to mention wet.

It’s a lovely place, even if it does have a geranium room, which is a sort of witchy hell on earth (me and geraniums don’t mix). Beautiful, but smelling of geraniums. 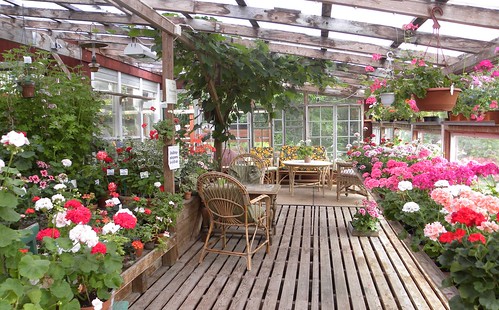 With a Pippi Longstocking hut for children, the niece has clearly had the same mentor I had. She used to have – pet – pigs, who all bore the names of children’s literature characters. 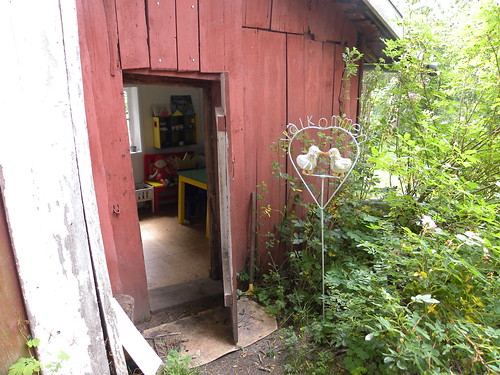