They didn’t go in for children’s books so much in the 1930s and 40s. That will be why the Grandmother, when she learned to read all those years ago, read Dickens and Scott for fun by the age of eight. And that’s why Daughter did a reading of the end of The Lady of the Lake by Sir Walter Scott at her Grandmother’s memorial service on Wednesday.

It was quite a nice service, if I do say so myself. We persuaded Son to be our MC, and he introduced the Resident IT Consultant’s eulogy, which was fairly amusing in places. The Grandmother had once been too young to sign the Official Secrets Act (while having cause to do so). And she used a cardboard box for the Resident IT Consultant to sleep in.

Odd sleeping habits must have run in the family, as her sister reminisced about the three or four years the two of them slept in the understairs cupboard, like some early Harry Potters.

At the crematorium before the memorial Son had the pleasure of hearing ‘Paul Temple’ reading William Penn, and this piece was repeated by Daughter in the next session.

We’re not exactly in the habit of organising this kind of thing, but we knew what we wanted. It was the knowing where to get hold of the right people that was hard. (Many thanks to the Scottish children’s author who didn’t object to questions about suitable musicians.)

In the end we were lucky, as Paul Temple introduced us to a 16-year-old local girl who played Schubert and Stradella on the cello, before charming everyone by singing Mononoke Hime – in Japanese – a cappella. Even an old witch can shed a tear over such perfection.

Initially we’d asked a local church if we could use it as our venue, but we were found too God-less, which meant that we actually ended up somewhere quite perfect in its place. Cowane’s Hospital was just right; the right size, nice and old, beautiful acoustics, situated next to the castle, and generally feeling like our kind of place. 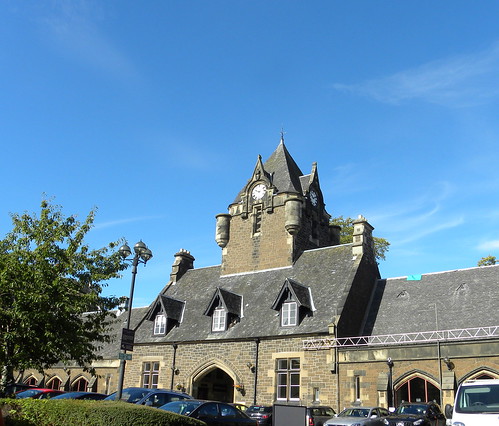 Afterwards we wandered downhill a little – literally – for afternoon tea at the Stirling Highland Hotel, where I normally go to hear about gruesome murders during Bloody Scotland. It couldn’t have been nicer. And no funeral tea is complete without a quick trip upstairs to the Old High School Telescope. The Resident IT Consultant helped paint it, decades ago.