Finally!! I have actually seen Sarah McIntyre and Philip Reeve in Charlotte Square. I went to their Chilly Up North event, and I brought the youngest Offspring along. (I think she enjoyed herself more than she expected to.)

There was a long queue and lots of people. Mainly small ones. They handed out sketchpads to the little ones, and even to those adults who wanted to draw. We had to shout yip yip yip to make Sarah and Philip enter. (Personally I’d have stayed away if I heard a whole tent yipping like that…) 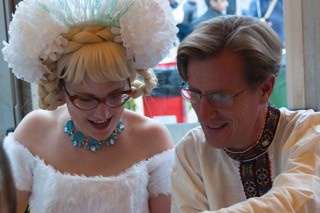 Philip wore yellow trousers that would startle polar bears, and a fetching white Cossack style shirt. Sarah matched him for yellowness, with a rather lovely fur-trimmed yellow dress. In order to avoid crinkles she’d brought her iron.

Their new book, Pugs of the Frozen North, is about a race to reach the Snow-father before anyone else, so you can have a wish. They couldn’t afford huskies, so had to use 66 pugs to pull the sledge (apparently there is a knitting pattern on how to knit your own pug on Sarah’s website). When they mentioned a particle detector for the Northern Lights my personal astrophysicist moaned in despair. 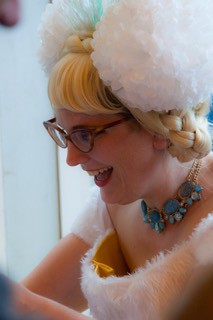 This was the first time they’d done the show, so they had to feel their way round (‘couldn’t be bothered’ to rehearse, or so they claimed), but it wasn’t too bad. Philip stole Sarah’s pug at one point, but what is a pug between friends? They made a snow game, riddled with dangers such as avalanches and crevasses, not to mention yetis.

Plenty of opportunity for audience participation. There was the snowball throwing, which caused some unfortunate Elvis impersonation, farting and yeti hands, but it wasn’t quite the ‘end of Reeve & McIntyre’ as a member of the audience came to the rescue with their anti-yeti spray. Every performance should have some. 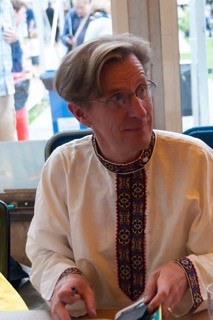 We were even taught how to draw our own pug, and it was surprisingly easy. We will be able to take over any day now.

There was an inflatable dice, and there was music and singing and an intricate chorus to sing (yip yip yip). They’re crazy. But popular.

So popular, in fact, that by the time the queue in the bookshop had sorted itself out, I had to give up on making myself known to Philip – again! – as I needed to be elsewhere. And he was so beautiful and yellow, too. It would have been lovely.

One response to “Yip yip yip”