Christoffer Carlsson – neither pink nor fluffy

Here is what you’ve all wanted to read; my little chat with Christoffer Carlsson, where we talk far more about schools and immigration, than we do crime novels. But it’s not every day ‘a boy from home’ comes to Stirling.

Having successfully caught the last coffee cup in the Bloody Scotland green room, Christoffer apologises, but I point out he’s better to have it than I am, since I don’t drink coffee. Anyway, he’s the guest.

It’s very noisy in the green room, after three events have come to an end and people have gathered, chattering away. In fact, Christoffer has had quite a conversation with Denise Mina, who didn’t run away as fast as I’d expected, seeing as she was in a hurry. 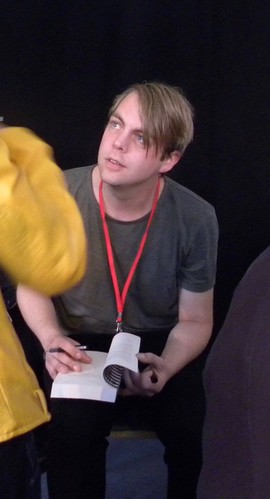 Promising to talk loudly into my recording device, he bends his head halfway down to the table. I ask about his new, Swedish book, which he mentioned during his morning event. I’ve been wishing for something set in or around Halmstad, and now it seems he has already written it. ‘It will be published in the spring,’ he says, ‘but I’ve not started talking about it yet.’ He’s been afraid that the place he’s from won’t be considered interesting enough, for a novel. It’s the hardest book he’s written. It took two years to write, and when I ask where it’s set, I get a very exact description, which I won’t burden you with here. I know. That’s enough.

It’s close to where he grew up, where he and his brother used to play. And then, halfway through writing the book, his parents sold up and moved away from his childhood home, moving into a flat in town, enjoying their new life on the 13th floor with marvellous views. ‘The novel became some sort of farewell. It was pretty hard. It’s as if part of my past has moved out of reach.’

From his parents’ high rise, to the ones Christoffer wrote about in Salem, the Stockholm suburb in the Leo Junker series, I wonder if he knew enough about that kind of existence, after such a rural childhood. He giggles. He’s lived in various parts of Stockholm, including Hagsätra, which is his fictional Salem. He tells me about a smash and grab at a pawnshop, saying that the crimes in the more disadvantaged areas are different from those in the posher parts of the city. To be honest, he felt more at home there, enjoying being recognised as a regular in the newsagent’s. He felt he belonged.

My next question is about schools, as he and I attended schools in small-town Sweden, whereas Leo went to a troubled school in one of the capital’s suburbs. Christoffer’s primary school was Snöstorpsskolan; which had one non-white pupil and no library, in a cute and quiet area on the outskirts of Halmstad. Secondary school was Östergårdsskolan where, thirty years after I should have gone there but didn’t, immigrants made up 50%, which Christoffer and his Snöstorp friends loved. Not so much the parents. It was a well integrated school, where the white pupils only noticed that the cool kids from Andersberg were good at football, or that someone had a great collection of [ice] hockey cards. Christoffer reckons this background helped with his writing. 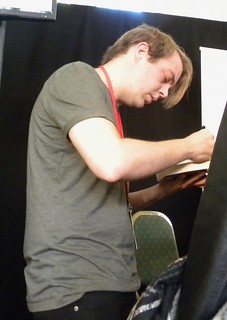 I ask about the many immigrant names in his books. I’m not used to this. There are obviously still a lot of Carlssons, but they have company now. Christoffer mentions the books by Arne Dahl. ‘They are bloody interesting,’ he says. His A Unit was pretty homogenous at the outset, but as society changed, so did the group. ‘There are still more -sson names, numerically.’ In his new book the names come from former Yugoslavia. It was the mid-1990s, and the war meant people came to Sweden. Now it is people from North Africa. ‘But they go from being refugees and immigrants, and ten years on they have ordinary jobs.’ I mention my childhood immigrants; one from Hungary and one from Finland, and he grins. ‘How exciting.’

We compare sixth form colleges. Christoffer says mine was old and posh, so I point out it was brand new in my day. He retorts that the teachers had all moved from the town’s posh school. He cackles some more when I mention that my head teacher was considered rather infra dig by the other teachers.

We talk about the Chileans, some of whom come to sticky ends in his books. ‘A bit sad,’ Christoffer admits, but tries to reassure me that most of the Chileans did fine. One of his professors at university comes from Chile. ‘The young are in a vulnerable situation, looking for excitement.’

And you miss the new integration in more expensive areas, because the newcomers simply can’t afford to live there. ‘People just want to survive. They are neither potential terrorists or angels. They are just like us. Some are idiots, some are good. They are just people.’ Christoffer reckons crime novels have a role to play in showing us this.

‘Why did you write your YA novel?’

He laughs. ‘The truth, the truth, Ann, is so bloody banal,’ he almost chokes on his coffee. ‘Book three about Leo Junker was so hard to write. It’s the longest, and in the middle of it I just said “I’ll do something different now.” So I went from writing about a middle aged man to a female teenager. Writing about crimes from a 16-year-old’s point of view, I didn’t want it to be too Kalle Blomkvist (an Astrid Lindgren child detective). I was, “what is it about? Is she staying put, or getting out?” Get out, or get stuck. It’s her choice.’ 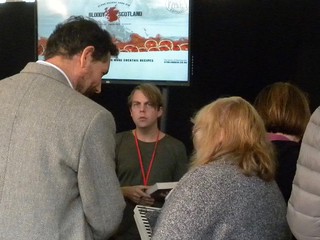 ‘Then when it was written I wondered what to do with it. The publisher felt I was in the middle of a series, so maybe make it a YA novel. I wrote it for myself; what I would have wanted when I was a teenager.’ There weren’t many changes, other than perhaps shortening the sentences. He was challenged on the flashbacks, that they might be too hard for young readers. ‘They’re into Game of Thrones! They see flashbacks all the time!’

‘So, Stirling High School, where you went yesterday. Did they really let you in?’ He giggles. ‘Yes, of course. They were great.’

Our conversation moves to October is the Coldest Month; his UK publisher Scribe calling it ‘almost transgressive fiction,’ while the Norwegians, the French, the Spanish and the Italians said the violence was sort of OK, but asked if he could ‘make the sex more pink and fluffy.’ Christoffer refused, and he asks, ‘pink and fluffy, what does it even mean?’

He isn’t sure what role fiction has today, but when he was young, fiction shouldn’t lie, there should be no whitewashing, and it shouldn’t be doing your parents’ job. Young readers can tell very easily.

‘But, in short, I was allowed to go there, and they were fantastic. We talked about books, about what they read, which is everything from Rankin to John Green to Virginia Woolf.’ Asking if people tell them what to read, Christoffer advised that they should decide for themselves. ‘Maybe not the best thing to say in a library…’ After a quick aside from me regarding Melvin Burgess once being asked to leave a school, we both say, ‘but you’re/I’m so kind and sweet looking!’ He reckons his image is really ‘sweet’ and I suggest perhaps he’s quite horrible, behind that innocent facade, and he cackles again, slapping his thighs. ‘Exactly, it’s what I’ve got going for me, I’m so kind and sweet.’ 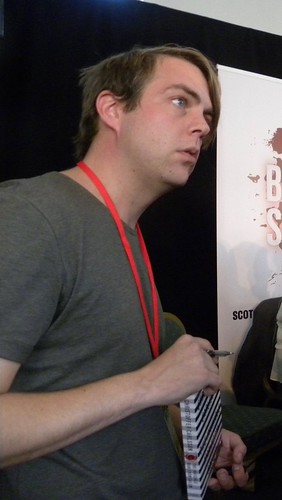 Anyway, it had been good, and the students stayed to chat after the bell went. He moans that school periods are too short. He’d have liked to get there earlier, to talk for longer, but is grateful he was able to go at all.

When abroad he usually says ‘you either take me to a school, or you take me to a prison.’ And it works. Apparently it’s much harder to get into prisons in Sweden. (Although I can think of one way…) He’s been in the UK twice now, including when we first met in Edinburgh last year. He hopes to attend Newcastle Noir in the spring, with Jacky Collins, and if Scribe agree, Christoffer would like to visit a prison there. ‘Are there any?’ he asks, and I admit to not being an expert on prisons. More cackling.

We decide we’ve been sitting in the green room for quite long enough. It’s now very quiet, or would be, if it weren’t for us. Leaving the Golden Lion, Christoffer goes up the hill to his hotel and an evening of working on his book, and I go the opposite way, ‘promising’ to look him up in Newcastle if I end up missing him too much.

And that’s it. Let’s hope we can find him a prison…