I mixed up my Reading with my reading last week. I blame Ikea. And their new Reading branch.

The thing is, though, you can read at Ikea. So far I have stopped short at stealing their display books. I have standards, and stealing doesn’t go with my upright (cough) kind of behaviour.

Books used on shelves in the made up rooms at any Ikea store are generally Swedish ones, so of little use to most customers. Especially if those customers like furniture more than reading. But I usually pause to see what they have.

It’s clear that they have got their hands on remaindered books, since there tend to be several of each book, and generally not the most exciting looking ones, either. The selection can be cheap versions of classic books, or books that were so uninspiring that not enough people bought them in the first place.

My snigger instinct awoke on one or two occasions when I encountered books by someone I once ‘knew.’ He was one term behind me at University, and he was destined for great things. Or so he thought. He already had one novel published, and was writing his next one, seeking inspiration from the place we were at. He had connections at a big Swedish publishing firm, but I suspect he didn’t know the word nepotism.

So, one of his novels has brightened the fake Ikea room settings, somewhere in the UK. And later on I discovered he had dabbled in children’s picture books as well.

But as I said, you can’t buy the shop display.

Sorry about the acronyms, but they are awfully useful on occasion.

I frequently suffer from FOMO, fear of missing out. It’s a very human thing to be gripped by and it’s very human to find it virtually impossible to let go of. I try, and I succeed, only to be caught out again, full of worries about what goes on behind my back.

Well, not really behind my back, of course, as there is ‘nothing’ stopping me from attending YALC, the Young Adult Literature Convention, in London this weekend. I’ve not been, and right now it fels as if everyone’s going. The first year I couldn’t decide whether I was more put out by how many authors were going, just to be in the audience, listening to their peers doing events, rather than me missing the events.

I tell myself one ‘festival’ is much the same as all the rest, and it’s enough to catch favourite authors somewhere, every now and again. It doesn’t have to be – can’t possibly be – every time in every place. What you don’t see you won’t miss.

I have this thing coming up soon, somewhere near me. What’s it called again? Oh yes, it’s the Edinburgh International Book Festival. I’ll go to that, and let someone else suffer the pangs of FOMO. After Edinburgh, there will be something else I can’t attend. And that’s all right.

Order of the Teaspoon

I gave away some used teaspoons this week. Their former owner doesn’t need teaspoons any longer and the new owner will hopefully find them useful. You can’t go to university and not have anything to stir your tea with.

And then by sheer coincidence I read that the Order of the Teaspoon has been around for ten years now, and that in turn made me think of the book How To Cure a Fanatic by Amos Oz, which is what started the whole thing.

Right now we need the kind of wisdom that Amos offers in his book more than ever. You can put out a fire with a teaspoon. If that’s all you have, and there are enough of you – us – and enough teaspoons. I’m wishing for lots of teaspoons both on a local scale in Britain, as well as on a more global scale where it seems there is a new atrocity taking place every week.

Please bring out your teaspoons, and urge everyone else to do so too! We can make a difference.

Billy Button is a Little Gem in more ways than one. Sally Nicholls has written the loveliest little tale about young Billy who yearns to be a telegram boy. Except he’s too young, and a bit on the small side.

But he’s got a big heart and quite a lot of initiative, and when Billy does something, it turns out well in the end. And that’s what we want. 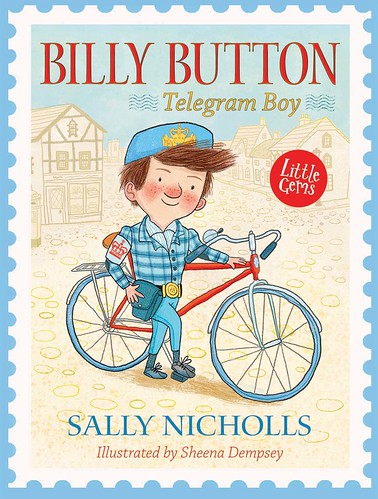 Set in the past when we had village shops with post offices as well as telegrams and telegram boys, this is a sweet and slow story about the Button family and angry old Mr Grundle.

Luckily – for both Billy and Mr Grundle – the regular telegram boy falls out of a tree, so Billy has to step in and take his place. And where would Mr Grundle be if that hadn’t happened?

As everyone would agree, some rules are there to be broken. Whether you are old enough to be telegram boy, or whether you are allowed to, well, read other people’s telegrams…

It’s a bit Miss Marple-ish, minus the murder.

They have all been young

More thoughts on older, former child characters in books. In the Guardian article one author didn’t feel that reading about Jo March as a mother was quite as wonderful as when she was one of four young sisters. And someone else didn’t care for Anne Shirley as a mother.

I felt the opposite way about these two characters. It was a bit of a shock to find that young girls grow up and become old, and mothers, even vaguely sensible. But not all that sensible. There is still a bit of the girl in there.

Which to me is important to learn. I never knew what Mother-of-witch was like as a girl. I obviously knew she had once been one, and I have the photographs to guide me. But in some odd way I gave the girl in the photos exactly the same personality and level of maturity as the woman I lived with.

It wasn’t until I heard the story of how her older brother teased her when she was doing the washing up, that I could see how it might have been. She was six and he was twelve. She tried to retaliate by throwing water at him with the help of a jug she was washing up. Only, it slipped from her hands and broke.

And the tale of her plaits. Her father wanted his little girl to have girly long hair, but this was the early thirties and all the other girls at school had the new bobs. Her ten year older sister – always a very practical woman – cut off her plaits when their father was away, and then there wasn’t a lot he could do about it. (Whereas I had looked at her school photo and assumed plaits were what she wanted.)

So, I like having known Anne and Jo as girls, and then seeing them as women and mothers. It sort of explained to me how life works, and I felt you could always see the girl in them. Anne might be telling her own child off, but she remembers what she herself had been like. And so does the reader.

I’m very much in favour of finding out what happened after, as long as the author hasn’t lost their touch and written a dreadful book. That’s what matters, not the age of the character.

Besides, I know how childish I am, deep inside.

First let me say how boring I often find the Guardian Review. A few short snippets don’t make up for pages and pages on things I have little interest in, or written in such a way that I find I don’t much care anyway. I know that children’s books can’t dominate a section of the newspaper that is aimed at everyone, but I do wish there could be more.

So this past weekend I was suitably – but pleasantly – shocked to find the first four pages set aside for children’s authors to muse on the question of letting child characters grow old.

OK, so it was caused by Harry Potter appearing as an adult in The Cursed Child, but that’s fine. They had an excellent selection of children’s authors, who expressed interesting and varied opinions on letting fictional characters mature, and many of them seemed to have read the Harry Potter books, instead of sniping about something they know nothing about. It was a pleasure to read.

And because they wrote their own short pieces, there was less scope for misinterpretation, which is another of my bugbears.

An adult Horrid Henry sounds perfectly horrid, and a jaded, older Alex Rider somehow lacks the necessary charm we have come to expect, so I’m glad this is not about to happen. But as with most things, people don’t have to agree, and characters aren’t all the same, so what’s right for one will be wrong for another.

They are good at scaring me, these old favourites of mine, who have new books out with Barrington Stoke. This time it’s Steve Cole, dabbling in reading minds. 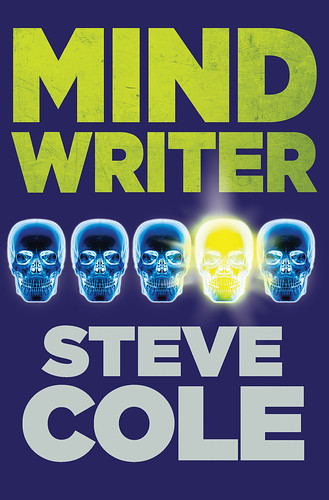 In Mind Writer Luke has discovered he can read people’s minds, which to begin with seems rather convenient. Knowing what a teacher is going to ask, for instance. But suddenly Luke reads exactly what goes on in people’s heads, and he finds he doesn’t want to know.

And then a girl called Samira turns up and she can make people do what she wants, including Luke. She puts thoughts into their heads.

Now there is nowhere for Luke to go, and he finds himself having to do what Samira says, which brings them to…

You could hate Samira, who seems evil. Or you can hang in there and wait to see what happens.