How wrong can you be?

I used to be paid to make mistakes.

I still make them, but these days it’s for free. However, I do know where I live.

Was unaccountably saddened and angered yesterday when I found out my address isn’t ‘quite right.’ This from a magazine publisher who has failed five times this year to send me their magazine. Apparently I must have given them the wrong address.

Bescause, how would I know? I only live here.

Funnily enough, when they invoiced me, the letter was capable of turning up in my letterbox. I erroneously took that as a sign that future mailings would also get here.

I know we have far more important things to worry about at the moment, but after having stayed relatively cheerful the last five days, discovering I don’t know where I am was surprisingly upsetting. I think it was the ease with which they suggested I am too incompetent to receive mail that got to me.

Suppose I should be grateful something got to me, as their magazine definitely isn’t.

But as I said, I once got paid to make mistakes. We all make them, sooner or later. It must be wonderful to have the self-assurance to tell a customer they don’t know where they live. They are now going to get the Swedish Post Office (the very people who paid me my ‘mistake money’) to tell Royal Mail how to deliver post.

I wish them luck.

And if they’re not wrong, I suppose it has to be me.

Exploding grannies appear to be a thing these days. Especially at the beginning of books, and I suppose it’s as well to get granny out of the way as soon as you can, plotwise and with a violent end. 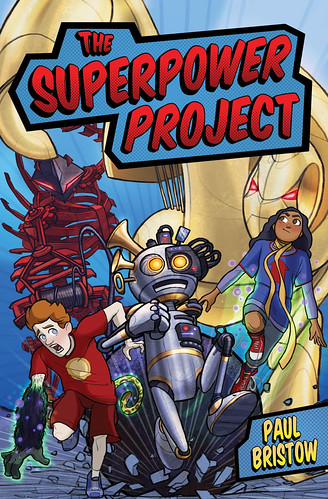 Paul Bristow’s first book The Superpower Project is both funny and exciting. Illustrated in comic style by Luke Newell, it looks just like the kind of book middle grade readers would be drawn to, but had I not been offered this by an adult, I’d never have looked at it twice.

And that would have been a shame, because I enjoyed it a lot, and I should know by now not to judge a book this way. The blurb is much more my kind of thing, though.

Megan and Cam suddenly discover they have superpowers. Megan can fly, and Cam can, well, turn into a hamster. This all seems to have something to do with Megan’s gran. They sort of inherit an ancient robot with amnesia, and soon after they discover that the town’s transformer-sculpture robots are out to kill them.

So why did gran explode, what did she want them to do, and what’s with all these sculptures, and their weirder than weird owner Mr Finn?

Set in Greenock, the children and their robot end up investigating old factories and an old hospital, a graveyard and the bottom of the river, among other things. They are brave and intelligent and with a nice line in humorous chat. And hamsters are obviously really useful animals.

When you think about it.

There is a promising epilogue, too, and I can only hope there might be more mayhem in Greenock before long. There are several other characters it’d be fun to see more of.

And I actually didn’t know that all schools are legally obliged to have three nice teachers.

Elephants and other foreigners 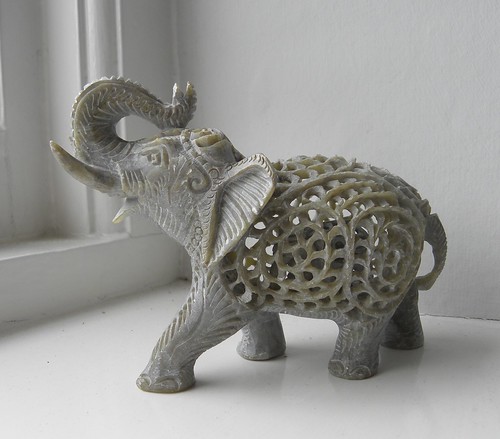 Obviously ‘no one’ read blogs on Friday, so no need to be concerned with causing offense. Not that I would be anyway. As for now, I don’t know who reads what. I feel the need to avoid too much ‘news’ because so far it’s not really news, but more speculation, and none of it designed to make anyone feel better.

What’s interesting in the two books I reviewed, is [slight spoiler alert here] the prejudice.

Dindy’s mother is very anti-native, in this imperial tea plantation setting in 1946 or 47. For her children the setting is completely natural, and they love their native ‘spare mum.’ They speak the language. They have been warned about a lot of things they mustn’t do, but the local people don’t scare them. They just are. Just as they themselves are.

The adult men, their father and the doctor, appear to be happy with both the British and the Indians. But when the doctor is replaced with an Indian doctor, it takes an emergency for the children’s mother to accept him. Even though he trained in Britain.

In the adult crime novel Inspector Chopra is fiercely pro-Indian, obviously, and refuses – like his hero Gandhi – to accept British favours. It’s quite reassuring that such a change has taken place, I feel.

And yes, anyone who knows India well, will be able to tell that I don’t. I’m merely sitting in – or maybe just outside – Western Europe, spouting opinions.

Speaking of doctors, Son was delivered by an Indian doctor. Daughter was helped into this world by a Brazilian midwife. Both occasions were in England, a mile away from the street we lived in, where the the neighbourhood children were quite happy to tell mine to go back where they came from.

The Perplexing Theft of the Jewel in the Crown

Somebody please give me a baby elephant! I am so in love with little Ganesha in Vaseem Khan’s crime novels about the retired inspector Chopra. I hope young elephants really do act and think like Ganesha, because if they do, the world will be better for it. 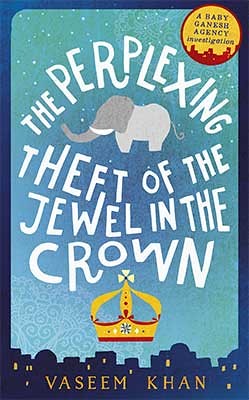 In his second book about this upright citizen and private detective – a man who cannot be bribed – Vaseem aims very high indeed. The crime is the theft of the Crown Jewels, and most importantly the Koh-i-Noor. The police are incompetent and corrupt, so it is up to Chopra to work out who did it, and also to find the priceless jewel.

This was even more fun than the first book, with a new character to care about, and with a much larger role for Mrs Chopra (and her mother…) and the retired inspector even gets himself an assistant. I hope his unreliable heart will stand up to all this private detecting and rushing about, because I want a lot more.

As in the first novel, we get to see India as we – probably – didn’t know it, and the food is delicious! I mean, it really seems as if the food is very good. I wouldn’t object to a small sample included with the book. 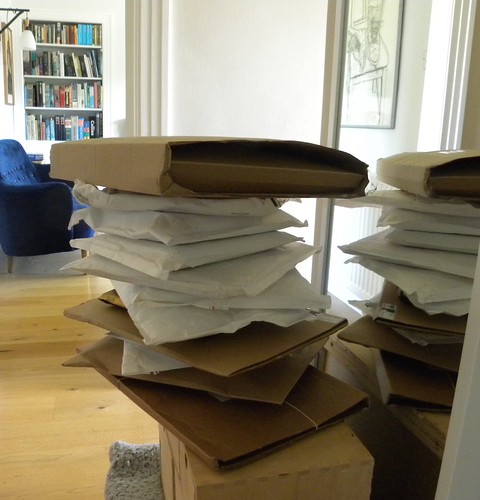 This pile won’t beat its competitors in the big I-have-been-away-pile race. Happily some people receive even more books than I do. Good luck to them with their reading. I know I won’t get through all of mine.

And I refuse to speculate on how recent developments will affect the book trade. I’ve almost forgotten the changes after October 2008.

When there was hope

What to blog about today? Yeah, well, that’s a hard one.

In the 1960s I didn’t think about politics. It was beyond my comprehension. In the 1970s I thought about it quite a lot. It was something that seemed to bring about change. The kind of change that was good for most of us.

Below are some of the books I read and enjoyed. I haven’t read them for over forty years, so don’t remember enough to tell you much of the actual plots. The two by Stig Malmberg were set in contemporary Sweden, and featured fairly ordinary Swedish teenagers. One is about doing your national service and how that might be right, or not.

The two novels by Sven Wernström are set in Latin America and deal with things like the Cuban revolution as experienced by ordinary teenagers there. It was thrilling to read for someone who grew up on Enid Blyton and then moved on to Agatha Christie, both of whom wrote books about characters unlike myself, during a time period that was already in the past, and which I couldn’t know.

The Retired Children’s Librarian was cautiously liberal, and didn’t really care for Malmberg, but grudgingly admitted there was merit in Wernström’s Latin American stories. I liked them all, and it didn’t matter that she didn’t always approve.

Because there was hope. Did I say? If we waited long enough, life would be fine and fair for everyone. If the ‘wrong’ party won an election, it was just their politics that was wrong. As people they were as normal and decent as the rest of us.

Dindy and the Elephant

There is less elephant in this book by Elizabeth Laird than the title leads you to expect. But that’s OK. What’s there is quite satisfying, and I feel as though I could almost deal with an angry elephant. 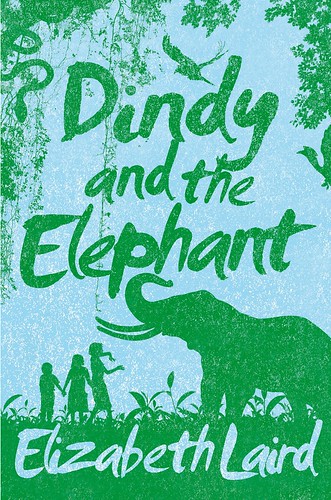 I have to admit to a particular fondness for period fiction from India, and former British Empire countries in Africa. This one is set in India, on a tea plantation between the end of the war and just before Indian independence.

Nine-year-old Dindy and her brother Pog, who’s only six, escape from their bungalow one day when bored, despite not being allowed out. That’s when they encounter the potentially dangerous elephant.

But this is mostly about how much love ‘British’ children born and growing up in India have for their country, and how people of their parents’ generation don’t necessarily share that love. Dindy’s mother hates India and looks down on the natives, including those who work for the family.

Prejudice from both sides emerges and it’s interesting to see how they deal with a bad situation, and also what their feelings really are.

Very lovely little book. Whereas there might be no point in a sequel, I rather feel it’d be nice to see what happened next.